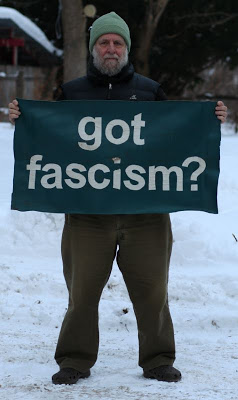 Marc Estrin exhibits the tag line to his exclusive Rag Blog article about Obama advisor Cass Sunstein that has received much attention in the blogosphere.
Estrin’s exclusive about Obama confidant
Triggers alarm about controversial scheme

The Rag Blog broke a story on January 11 entitled “Got Fascism?: Obama Advisor Promotes ‘Cognitive Infiltration’” that has stirred up an internet storm.

The article, written for The Rag Blog by novelist Marc Estrin, reveals a previously unreported and highly controversial strategy for fighting dissension and “extremism” — especially targeted at those adhering to “conspiracy” theories — originated by Obama appointee and long-time Obama friend and colleague Cass Sunstein in a 2008 scholarly journal.

The material published in The Rag Blog was in turn covered by Daniel Tencer at The Raw Story on January 13. It was followed up by Glenn Greenwald in an extensive article published by Salon.com entitled “Obama confidant’s spine-chilling proposal,” that has been updated several times since and even received a response from Paul Krugman. Greenwald’s Salon.com article was also distributed by CommonDreams.

Both Tencer and Greenwald credited The Rag Blog and Marc Estrin with breaking the story. Marc Estrin’s original article has been reposted extensively on domestic and international websites, and The Rag Blog has received thousands of referral hits from the Raw Story, Salon.com, and CommonDreams postings and from the republishing of our original story around the internet.

Visits to The Rag Blog have come from links placed on a wide variety of sites and from across the political spectrum, but the story has especially caught on with conspiracy buffs and among some on the ultra-right.

(In December The Rag Blog published an article about a Supreme Court decision that let stand a lower court ruling declaring torture, in the words of the author, “an ordinary, expected consequence of military detention” — a ruling that in effect denied even suspected enemy combatants the protection that comes with being classified a “legal entity.” The Rag Blog posting of that article (a story that did not originate with us) also drew extensive attention including a front page link on The Raw Story — much of it again from the conspiracy fringe — and resulted in thousands of visits to The Rag Blog.)

In a recent scholarly article, [Cass Sunstein] and coauthor Adrian Vermeule take up the question of “Conspiracy Theories: Causes and Cures.” (J. Political Philosophy, 7 [2009], pp. 202-227). This is a man with the president’s ear. This is a man who would process information and regulate things. What does he here propose?

Cass Sunstein has long been one of Barack Obama’s closest confidants. Often mentioned as a likely Obama nominee to the Supreme Court, Sunstein is currently Obama’s head of the Office of Information and Regulatory Affairs where, among other things, he is responsible for “overseeing policies relating to privacy, information quality, and statistical programs.”

In 2008, while at Harvard Law School, Sunstein co-wrote a truly pernicious paper proposing that the U.S. Government employ teams of covert agents and pseudo-“independent” advocates to “cognitively infiltrate” online groups and websites — as well as other activist groups — which advocate views that Sunstein deems “false conspiracy theories” about the Government. This would be designed to increase citizens’ faith in government officials and undermine the credibility of conspiracists. The paper’s abstract can be read, and the full paper downloaded, here.

This program would target those advocating false “conspiracy theories,” which they define to mean: “an attempt to explain an event or practice by reference to the machinations of powerful people, who have also managed to conceal their role.” Sunstein’s 2008 paper was flagged by this blogger [The Rag Blog‘s Marc Estrin], and then amplified in an excellent report by Raw Story‘s Daniel Tencer…

And from Daniel Tencer at The Raw Story:

Sunstein’s article, published in the Journal of Political Philosphy in 2008 and recently uncovered by blogger Marc Estrin, states that “our primary claim is that conspiracy theories typically stem not from irrationality or mental illness of any kind but from a ‘crippled epistemology,’ in the form of a sharply limited number of (relevant) informational sources.”

By “crippled epistemology” Sunstein means that people who believe in conspiracy theories have a limited number of sources of information that they trust.

Therefore, Sunstein argued in the article, it would not work to simply refute the conspiracy theories in public — the very sources that conspiracy theorists believe would have to be infiltrated.

Sunstein argued that “government might undertake (legal) tactics for breaking up the tight cognitive clusters of extremist theories.” He suggested that “government agents (and their allies) might enter chat rooms, online social networks, or even real-space groups and attempt to undermine percolating conspiracy theories by raising doubts about their factual premises, causal logic or implications for political action.”

“We expect such tactics from undercover cops, or FBI,” Estrin writes at the Rag Blog, expressing surprise that “a high-level presidential advisor” would support such a strategy.

Estrin notes that Sunstein advocates in his article for the infiltration of “extremist” groups so that it undermines the groups’ confidence to the extent that “new recruits will be suspect and participants in the group’s virtual networks will doubt each other’s bona fides.”

Sunstein has been the target of numerous “conspiracy theories” himself, mostly from the right wing political echo chamber, with conservative talking heads claiming he favors enacting “a second Bill of Rights” that would do away with the Second Amendment. Sunstein’s recent book, On Rumors: How Falsehoods Spread, Why We Believe Them, What Can Be Done, was criticized by some on the right as “a blueprint for online censorship.”

Sunstein “wants to hold blogs and web hosting services accountable for the remarks of commenters on websites while altering libel laws to make it easier to sue for spreading ‘rumors,'” wrote Ed Lasky at American Thinker.

[Versions of The Rag Blog‘s story about Cass Sunstein are also up on Daily Kos, OpEd News, and Information Clearing House, along with numerous other blogs and news aggregators.]

[Thorne Dreyer is editor of The Rag Blog.]