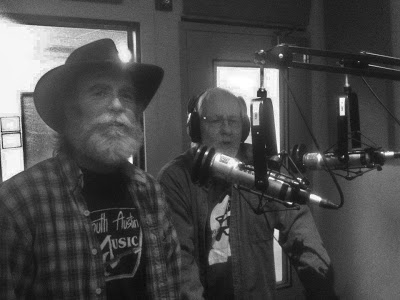 Tom Hayden, progressive political activist and SDS founder, will be Thorne Dreyer‘s guest in a New Years’ Special on Rag Radio, Friday, January 6, 2012, from 2-3 p.m. CST on KOOP 91.7-FM in Austin and streamed live to the world.

Melton is an Austin-based professional engineer, environmental researcher, filmmaker, writer, green builder, and front man for the band, Climate Change. His main mission is filming and reporting on the impacts of climate change happening now. Bruce Melton’s new book is Climate Discovery Chronicles. He is a regular contributor to The Rag Blog and his Rag Blog articles about climate change can be found here.

This is Bruce Melton’s second visit to Rag Radio. (Listen to our first interview, on December 3, 2010, here.) On the show we discuss the current real-world effects of climate change and global warming, including events like the great Texas drought, wildfires, and tree kill of 2011; the North American Pine Beetle Pandemic; the Arctic “icequakes”; and the effect of global warming on the Amazon Rain Forest.

Ah, irony! In an AP story run in the Houston Chronicle, climate change activist Bruce Melton is shown wetting down the roof of his house during wildfires in Central Texas earlier this year. CLICK ON IMAGE TO ENLARGE.
Rag Radio — hosted and produced by Rag Blog editor Thorne Dreyer — is broadcast every Friday from 2-3 p.m. (CST) on KOOP 91.7-FM in Austin, and streamed live on the web. KOOP is an all-volunteer cooperatively-run community radio station in Austin, Texas.