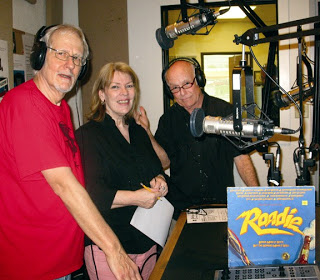 They discussed the making of the classic 1980 Alan Rudolph movie Roadie, which was partly filmed in Austin and which starred Meat Loaf, who is a 2012 inductee into the Texas Music Hall of Fame. They also talked about the upcoming Austin Music Awards, which Moser directs; the 2012 South by Southwest music, film, and interactive festival; and the thriving Austin music and film scenes.

An “unabashed former groupie,” award-winning rock journalist Margaret Moser is a senior editor and staff writer for the Austin Chronicle, and is also the author of three books including The Edge Guide to Austin and Rock Stars Do the Dumbest Things.

Moser has been a commentator for NPR and has written for Sony Records and MOJO magazine. She has served on the Austin Music Commission, is currently on the Board of the Texas Music Hall of Fame, founded the South Texas Popular Culture Center in San Antonio, and directs the Chronicle’s annual Austin Music Awards show during South by Southwest.

Sonny Carl Davis is a film actor, a musician, and a screenwriter. He played a redneck entrepreneur in Texas filmmaker Eagle Pennell’s The Whole Shootin’ Match and played memorable roles in Last Night at the Alamo and Fast Times at Ridgemont High. He also had featured parts in Thelma and Louise, Melvin and Howard, and Roadie, and a supporting role in Red Headed Stranger with Willie Nelson. Sonny was also a founding member in 1968 of Austin’s legendary Uranium Savages, a theatrical rock group that played Austin’s venerable 60s-70s rock venues.

Both Sonny Davis and Margaret Moser were involved in the production of Roadie, which was written by Austinites Big Boy Medlin and Michael Ventura, with Davis playing a featured role in the film. Roadie, which was filmed in Austin, Los Angeles, and New York, starred Meat Loaf and featured Art Carney, as well as musicians like Blondie, Alice Cooper, Hank Williams, Jr., Roy Orbison, Alvin Crow, Asleep at the Wheel, and the late Soul Train host, Don Cornelius.

Davis and Moser hosted a special screening of the film on March 5 at Austin’s Alamo Drafthouse on South Lamar. Meat Loaf is being inducted into the Texas Film Hall of Fame on March 8 at ACL Live at the Moody Theater in Austin.

This episode of Rag Radio was produced during KOOP’s spring membership drive; fundraising pitches, underwriting announcements, and recorded music have not been edited out of the podcast.