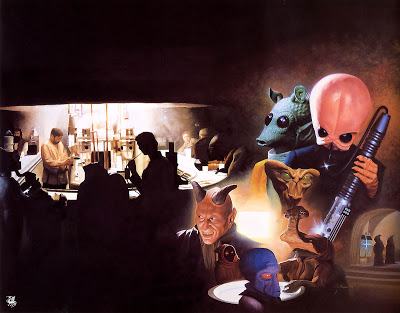 On the left as well as on the right, there are those who anthropomorphize ‘government’ as a criminal conspiracy that has existed since H. sap crawled out of the slime.

Am I the only one who wonders how the Republican Party got to looking like the cabaret scene from Star Wars? Or the only one that sees the lack of a sane and loyal opposition as bad for the country?

I’ve never been so much a Dem as an independent who saw the Dems on the correct side most of the time. But I never voted a straight ticket in my life until the midterms before Obama, when I was so pissed about the Iraq War that it overwhelmed everything else and led me to cast a vote that I knew would disadvantage perfectly competent local officeholders.

I guess I couldn’t be a yellow dog Dem because I grew up in a one party state where all the crooks were Dems. When the FBI ran the Brilab sting they nailed at least one county commissioner in EVERY county in Oklahoma. Sheesh.

We’re now, nationally, in a position where there are about as many high profile Dem crooks as Repug crooks and I will be surprised if the Dems do not take the lead before the next presidential election.

One party rule is just not a good idea. Never has worked in the public interest and never will. China is prospering now but if you think that’s really a one party state you don’t get out much.

I know some will answer up that both U.S. parties are bought by the same folks. That’s certainly true in a sense, but down at the lick-log those of that opinion are not as interested in government as they are in dogma. There are mundane choices to be made that affect people’s lives but are not susceptible to the Monopoly board theory of government.

On the left as well as on the right, there are those who anthropomorphize “government” as a criminal conspiracy that has existed since H. sap crawled out of the slime. They think it is something other than those among our neighbors who choose to show up and offer to do what needs doing. That way lies a proud irrelevance.

Luckily, most of the Ragamuffins [folks involved with The Rag, Austin’s 60’s-70’s underground newspaper and The Rag Blog’s antecedent and inspiration], not being lazy, involved themselves on the local level such that we progressed beyond the days when we discovered that the only black person to ever serve on a Travis County grand jury was a porter at the Cadillac dealer. Austin had a major duke-out between preservation and progress-at-any-price and over who shall pay the costs of growth.

We won some and lost some and no, I’m not totally satisfied, but I think the fight probably produced a better result than would have come from the downtown boosters just walking away and leaving us to run everything.

I guess the best possible outcome would be that the loyal opposition to Obama comes from the left, and I do see some stirrings of that in those races in Arkansas where the left has produced ads whacking the Blue Dogs for being bought by the insurance industry. Blue dogs, yellow dogs — I call that green shoots.