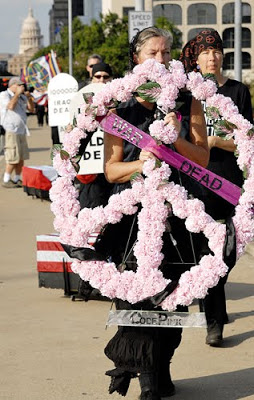 CodePink’s Fran Hanlon leads a Mourning March across the Congress bridge Monday in Austin, to inform the public of the war’s death toll. Photo by Michael Baldon / The Daily Texan.
CodePink for peace, not blood
Mourners march against death toll of Afghanistan, Iraq wars

CodePink Austin, a branch of the national grassroots organization formed by women, organized the memorial as part of the United Nation’s International Day of Peace to honor the lives lost in the wars in Iraq and Afghanistan.

CodePink is a women’s peace and social justice movement that seeks positive change through creative action, according to their Web site.

Eleven members of CodePink assembled at Austin City Hall on Monday evening to begin their procession to and from the Ann Richards Congress Avenue Bridge. The members wore all black, including black veils, to mourn the deaths and neither spoke nor reacted to onlookers.

In addition to the coffins, the mourners carried tombstones inscribed with the death toll from each of the three countries. According to the tombstones, about 1,000,000 Iraqis, 28,000 Afghans and 5,180 U.S. soldiers have died.

The members of CodePink said that they got their statistics from British Medical Journal, Human Rights Watch and the U.S. Department of Defense. A Sept. 18 Reuters report put the number of Iraqi civilian deaths between 93,108 and 101,608.

“Some numbers people dispute,” said CodePink member Jim Turpin. “We’re trying to make this real for people and for them to see the numbers.”

Although there were fewer than a dozen mourners present at the march, many cars and pedestrians reacted to the 40-minute procession by honking and flashing peace signs.

“It was very respectful,” Turpin said.

Many CodePink members have been active in promoting peace for a long time. As a former UT student, Jamie Josephs said she marched in 1974 on campus to demonstrate against the violence in Cambodia at the time.

“We have to make the idea of peace visible,” Josephs said. “If it doesn’t affect people right here, right now, it doesn’t matter.”

Thanks to Heidi Turpin / The Rag Blog