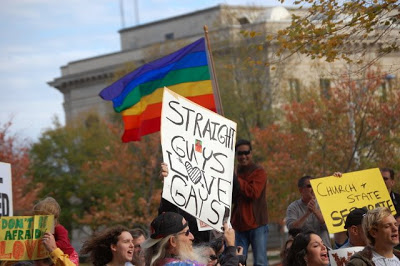 Charlotte rally against Prop. 8: Republican Reid Read (beard, backwards NASCAR cap, with sign): No hater. See brother Kirk’s sign below.
‘It is ironic that the gay marriage issue has served as a launch pad for a militant protest movement.’
By Jeff Jones / The Rag Blog / November 16, 2008

See ‘Signs of the Times’ by Kirk Read, Below.

SAN FRANCISCO — Kirk Read is one of Queer SF’s best writers and performers. His brother is a straight Republican; Kirk held up the Lindsay Graham sign at SF’s protest today.

The rebirth of the grass-roots LGBT [Lesbian, Gay, Bi-Sexual, Transgender] Movement has been amazing: I’m very impressed with the sudden energy and determination we can see all over CA, especially in Palm Springs, where LGBT residents now comprise 62% of the voters. It’s the first time since the early nineties we have been forced to fight back.

In many ways, it is ironic that the gay marriage issue (which many people I know thought secondary or irrelevant — some call for the abolition of government-sanctioned marriage itself), has served as a launch pad for a militant protest movement all over the United States. This defeat at the polls has galvanized a new gay/straight civil rights alliance that will have long–term consequences far exceeding the issue of marriage. 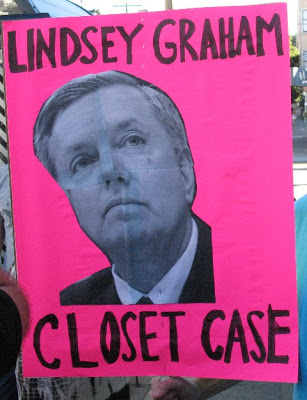 Here are some photos from today’s gay marriage rallies.

My brother Reid’s sign [at top], which was in the front of the rally at Charlotte, NC’s City Hall rally. Then my LINDSEY GRAHAM CLOSET CASE sign [above]. Reid’s is far superior!

Whatever cynicism and ambivalence I may feel about marriage and the gay movement (not an insignificant amount) is melted by those photos of him.

I will add that the tie dye shirt he is wearing was my favorite all time tee shirt from age 11-18. I stole it from my sister and my brother apparently stole it from me. It looks great on him. He put a picture of my book cover on the front of his sign, next to the heart.

The other side of his sign says “Hey Obama! What about us?”

I love that my Republican brother is turning up the heat already among a group of people who expect Obama to do some serious David Copperfield shit with this fucked up country.

1 Response to Read the Signs : Prop 8 Kickstarts a Movement