Remember : This Could Be YOU (Without Warning) 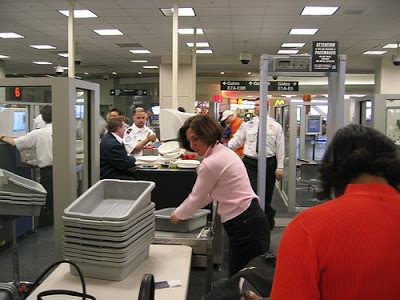 HARRISBURG, Pa. — A commercial airline pilot and convert to Islam who says his name is on the U.S. government’s secret terrorist watch list has fought back, filing a federal lawsuit against the Homeland Security Department and various other federal agencies.

Erich Scherfen says unless his name is removed from the list, he faces losing not only his job but the ability to make a living in his chosen profession.

“My livelihood depends on being off this list,” Scherfen told reporters Tuesday after his lawyers filed the lawsuit in U.S. District Court in Harrisburg.

He alleges that the government’s actions have violated his and his wife’s constitutional rights. The suit seeks a hearing and a decision before he is scheduled to lose his job on Sept. 1.

A New Jersey native, Scherfen, 37, said he believes his name was placed on a watch list because he converted to Islam in 1994 — even though he is a Gulf War combat veteran. Both he and his Pakistan-born wife, who is also a Muslim, said they have no criminal records or ties to terrorists.

In their lawsuit, the couple said they have been repeatedly subjected to searches, questioning and detention at airports and border crossings since 2006. Ticket agents and others have made vague references to their names being on lists, but there was no clear explanation for the extra scrutiny.

Scherfen said he learned that he was a “positive match” on a list maintained by the Transportation Security Administration in April, when his employer, Colgan Air Inc., suspended him for that reason. The Virginia-based regional carrier continued to pay him for the first two weeks of his suspension, but he is currently on unpaid leave and expects to lose his job if his name is not taken off the list by the end of this month.

Scherfen had worked for the airline for about a year when he was suspended, a Colgan spokesman confirmed.

The couple said their attempts to resolve the situation through the government have been unsuccessful.

While declining comment on the lawsuit, Davis said “religious and political affiliation does not impact whether an individual is placed” on a list.

The Justice Department declined comment on the lawsuit and said in a statement that the FBI’s Terrorist Screening Center, “for both national security and personal privacy reasons,” does not confirm or deny the existence of any name on the watch lists that it maintains.

“We have a problem when a law-abiding combat veteran is about to lose his job because the government has placed him on a terrorist watch list, but refuses to tell him why,” said Harrisburg lawyer Amy C. Foerster, who is working with the Pennsylvania chapter of the American Civil Liberties Union on the case.

This entry was posted in RagBlog and tagged Civil Liberties, Homeland Security, Terrorism. Bookmark the permalink.