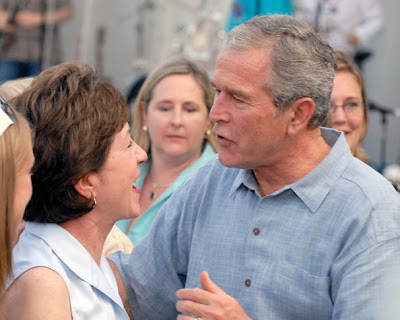 Every discussion about a pandemic begins with the public health component but moves quickly to an acknowledgement that an outbreak, and the ensuing quarantines, would bring economic activity to a virtual standstill.

When House Appropriations Committee chairman David Obey, the Wisconsin Democrat who has long championed investment in pandemic preparation, included roughly $900 million for that purpose in this year’s emergency stimulus bill, he was ridiculed by conservative operatives and congressional Republicans.

Obey and other advocates for the spending argued, correctly, that a pandemic hitting in the midst of an economic downturn could turn a recession into something far worse — with workers ordered to remain in their homes, workplaces shuttered to avoid the spread of disease, transportation systems grinding to a halt and demand for emergency services and public health interventions skyrocketing. Indeed, they suggested, pandemic preparation was essential to any responsible plan for renewing the U.S. economy.

But former White House political czar Karl Rove and key congressional Republicans — led by Maine Senator Susan Collins — aggressively attacked the notion that there was a connection between pandemic preparation and economic recovery.

Now, as the World Health Organization says a deadly swine flu outbreak that apparently began in Mexico but has spread to the United States has the potential to develop into a pandemic, Obey’s attempt to secure the money seems eerily prescient.

And partisan attacks on his efforts seem not just creepy, but dangerously short-sighted.

The current swine flu outbreak is not a pandemic, and there is reason to hope that it can be contained.

But it has already believed to have killed more than 100 people in a neighboring country and sickened dozens of Americans — causing the closing of schools and other public facilities in U.S. cities.

Dr. Anne Schuchat, the U.S Centers for Disease Control and Prevention’s Interim Deputy Director for Science and Public Health Program, explained to reporters on Saturday that, because the cases that have been discovered so far are so widely spread (in California, Kansas, New York, Ohio and Texas), the outbreak is already “beyond containment.”

On Sunday, Homeland Security Secretary Janet Napolitano announced that a national “public health emergency” had been declared. Notably, the second question at the White House press conference on the emergency had to do with the potential impact on the economic recovery.

On Monday, the question began to be answered, as Associated Press reported — under the headline: “World Markets Struck By Swine Flu Fears” — that: “World stock markets fell Monday as investors worried that a deadly outbreak of swine flu in Mexico could go global and derail any global economic recovery.”

Before U.S. markets opened, the Wall Street Journal reported: “U.S. stock futures fell sharply Monday as the outbreak of deadly swine flu stoked fears that a possible recovery in the global economy could be derailed.”

The Dow, after several weeks of surging, finished the day down 51 points, with the Journal headlining a late-day report: “US Stocks Down On Continued Swine Flu Fears.”

To a great many Americans, the latest developments on the public health and economic fronts are genuinely scary.

Not faked-up, politically self-serving scary, like the arguments Rove advanced in February to frame opposition to the stimulus package Obey crafted in the House.

George Bush’s political manipulator dismissed Obey’s proposals as “disturbing” and “laden with new spending programs.” He said the congressman was peddling a plan based on “deeply flawed assumptions.”

Rove specifically complained that Obey’s proposal included “$462 million for the Centers for Disease Control, and $900 million for pandemic flu preparations.”

This was wrong, the political operative charged, because the health care sector added jobs in 2008.

As bizarre as that criticism may sound — especially now — Rove’s argument was picked up by House and Senate Republicans, who made it an essential message in their attacks on the legislation. Even as Rove and his compatriots argued that a stimulus bill should include initiatives designed to shore-up and maintain any recovery, they consistently, and loudly, objected to spending money to address the potentially devastating economic impact of a major public health emergency.

The attack on pandemic preparation became so central to the GOP strategies that AP reported in February: “Republicans, meanwhile, plan to push for broader and deeper tax cuts, to trim major spending provisions that support Democrats’ longer-term policy goals, and to try to knock out what they consider questionable spending items, such as $870 million to combat the flu and $400 million to slow the spread of HIV and other sexually transmitted diseases.”

Famously, Maine Senator Collins, the supposedly moderate Republican who demanded cuts in health care spending in exchange for her support of a watered-down version of the stimulus, fumed about the pandemic funding: “Does it belong in this bill? Should we have $870 million in this bill? No, we should not.”

As late as Sunday, Collins was still using her official website to highlight the fact that she led the fight to strip the pandemic preparedness money out of the Senate’s version of the stimulus measure. On Monday, after her machinations with regard to the stimulus bill were revealed, Collins attempted to defend herself, dispatching a spokesman to declare that, “There is no evidence that federal efforts to address the swine flu outbreak have been hampered by a lack of funds.”

But, as The Washington Post notes: “Collins and the others who led the fight to axe the flu money three months ago can only hope that doesn’t change.”

That’s because the Republicans essentially succeeded. The Senate version of the stimulus plan included no money whatsoever for pandemic preparedness. In the conference committee that reconciled the House and Senate plans, Obey and his allies succeeded in securing $50 million for improving information systems at the Department of Health and Human Services (HHS).

But state and local governments, and the emergency services that would necessarily be on the frontlines in any effort to contain a pandemic, got nothing.

Did Rove, Collins and their compatriots want a pandemic?

They were just playing politics, in the exceptionally narrow and irresponsible manner that characterized the Republican response to the stimulus debate –- and that, because of Democratic compromises in the Senate, dumbed down the plan President Obama ultimately signed.

No serious player in Washington has been unaware of the fears with regard to a flu pandemic. They have been well-publicized and well-discussed. Even Collins admitted as she objected to the House allocation for preparedness: “I think that everybody in the room is concerned about a pandemic flu.”

And it is important to point out that no serious player in Washington could have been unaware of the threat that a pandemic — or even the fear of one — would pose to economic renewal. Every discussion about a pandemic begins with the public health component but moves quickly to an acknowledgement that an outbreak, and the ensuing quarantines, would bring economic activity to a virtual standstill.

So Rove, Collins and those who echoed their know-nothing appeals understood that they were wrong.

But they bet that they would be able to score their political points without any consequences.

Now that fears of a pandemic have been raised, however, it is appropriate to ask whether individuals who are so manifestly irresponsible and partisan should be taken seriously.

This is an especially important concern with regard to Collins, who portrays herself as a moderate who tries to make things work in Washington.

Senate Democratic leaders bowed to Collins in the process of crafting their chamber’s version of the stimulus. In doing so, they eliminated more than 80 percent of the modest amount of money that had been allocated for pandemic preparedness — and all of the money that would have helped emergency services.

Collins played politics with public health, and the economic recovery. That makes her about as bad a player as you will find in a town full of bad players.

But Senate Democrats bent to her demands. That makes them, at the very least, complicit in the weakening of what needed to be a muscular plan.

The bottom line is that there were no heroes in either party on the Senate side of the ugly process that ridiculed and then eliminated pandemic preparedness funding.

There is, however, a hero on the House side. Throughout the process, David Obey battled to get Congress to recognize that a pandemic would threaten not just public health but a fragile economic recovery.

Thanks to Cloudy Scribbler / The Rag Blog