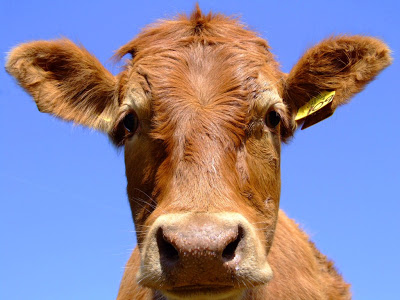 Cow. Check out this dude’s carbon footprint.
The Repugs intend to sell this by claiming that Cass Sunstein is Obama’s ‘economic guru’ and Sunstein wrote a well known (within academia) book on animal rights.

I just got polled by what was plainly the Repug party and it was testing attacks on Obama.

The most interesting one was a claim that Obama wants to ban hunting and force people to become vegetarians.

They intend to sell this by claiming that Cass Sunstein is Obama’s “economic guru” and Sunstein wrote a well known (within academia) book on animal rights. They can use for background filler substantial economic literature demonstrating that the most effective thing humans could do to stop global warming is become vegetarians because meat has a huge carbon footprint compared to veggies and fruit. Therefore, anybody who believes in global warming is a vegetarian, get it?

At least, Sunstein is closer to Obama than Bill Ayers ever was and Obama has indeed consulted with Sunstein… but anybody with two gray cells to rub together should understand by now that Obama has no guru, with the possible exception of the late Saul Alinsky, and that could only alarm people who’ve never read Alinsky (who was also Cesar Chavez’ guru).

I’m beginning to feel sorry for the Repugs because they are so plainly at the bottom of the attack barrel, but every time I see the jobless claims or Iraq deaths the mood passes.

2 Responses to Repugs : Obama Doesn’t Want You to Eat Meat!