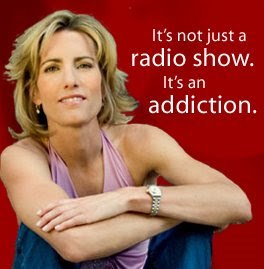 [Jim Baldauf sent this great transcript from Ann Coulter-impressionist right wing radio host Laura Ingraham getting really pissed at her guest. It was released by Harry Shearer and the post below comes from riverdeep on DemocraticUnderground.com — Thorne Dreyer / The Rag Blog]

Somehow Harry Shearer got audio of Laura Ingraham behind the scenes of her radio show (I’m guessing someone on her show hates her), off-air conversations with and about her guest, one Dr. Diane Sollee, some family counselor. He played it on his marvelous, off-beat radio show, ‘Le Show’, airing on NPR and other stations.

Listen to her ridicule her guest because she had the nerve to tell her she has never heard the great Laura Ingraham Show. It’s really harrowing, and gives some wonderful insight into how the conservative mind works, i.e. destroy your enemies.

Take a listen to his other shows, they’re all good.

Here is the piece excerpted.

And the target of Ms. Ingraham’s scorn, Diane Sollee’s site.

And, for those of you who can’t get to these links, here is a transcript. Enjoy!

Harry Shearer: Uh, from the Found Objects Department…the, uh, the word to the wise is here, don’t tick off a conservative talk radio host by admitting that you haven’t heard her show.

This is from the Laura Ingraham show, both on AND off the air.

Radio Staff: You’re on with the guest.

Laura Ingraham: It’s Laura, I just wanted to say hi off air before we came back.

Dr: Well, thanks for having me, I’m really happy to be on.

LI: Great, well we’re gonna open it up to calls so you can be, uh…

Dr: No one, no one told me about the calls.

LI: Really? Well, here’s a word to the wise-before you’re going on a show with five million listeners, go online and listen to it.

LI: Do some homework.

Dr: …I know, I know. But don’t lecture me, ’cause I was up to three working two nights in a row so I don’t have a second. I would’ve, I wanted to.

LI: Okay, well uh, I’ll try to forget that you’ve haven’t heard our show. I usually would hang up on people who haven’t heard the show, but…

LI: How do you, how do you…you’ve never heard a radio show? How are you, how are you on the culture? You gotta listen to radio, you can’t, you can’t-

LI: That’s the way to endear yourself to hosts, tell ’em you never listen to the show. Here we come.

LI: So Diane is a very successful marriage and family therapist, and it turns out that, guess what, marriage is good for your health and divorce isn’t. And Diane joins us now. Diane, how are you?

Dr: I’m fine. And you’re annoyed because I told you that I didn’t listen to your show, and I said I haven’t listened to ANY radio show.

LI: Yeah, I actually, I, well, to be, since you want to bring up something that happened during the break, let’s bring it up. Because I asked you, I said, have you, have you listened to the show? And yes, it’s a pretty big radio show. It’s not, it’s not the biggest thing on the earth, and who cares if you don’t. But, I was, I WAS surprised that when you’re in the business that YOU’RE in, where it’s about values and connecting with people, that-and it’s just interesting-you just have never listened to ANY talk radio in your entire life EVER, right?

Dr: I may have fifteen years ago before I started this thing I’m doing. But, I, I work 24/7, literally. You know, I worked last night ’till three o’clock, and the night before until three o’clock and I get up and I start working again. And I don’t, I don’t commute, I’m not in a car-

LI: You can have a radio, right? You don’t need to commute, you put on the kitchen.

Dr: I don’t turn on music, I don’t turn on talk radio, I’m sorry. You know, I, I, and I thought I should be honest with you -I haven’t- I haven’t heard your show. I didn’t realize there was call-in, even. No one told me that. Which I don’t mind, I look forward to-

Dr: I know about talk radio, I think it’s incredibly (overtalk by Laura)

LI: Well, you’re a, but you’re a professional, you’re a professional, and you’re head of this big, ah, interesting, and I think a vibrant group and that’s why we wanted to have you on. I’m just, I’m always interested that people, who, you know, want to get the word out about your group, I mean, just, just a little research on, you know, with whom you’re talking and to whom you’re talking.

We’re going to take a break. When we come back, more questions for our guest, Diane Sollee. She’s the founder and director of Coalition for Marriage, Family and Couples Education. You can go to smartmarriages.com for more information. We’ll get to all your calls. Be patient, be brief. Stay with us.

(off air, talking to her radio staff)

LI: If you are supposedly tapped into the culture, what’s happening, you’ve never listened to talk radio-you’re completely out to lunch. I mean, she’s out to lunch. Idiot. By the way-

LI: -really stupid for her, to, uh, open that door. Screw off, she revealed that, and so I’m going to friggin’ destroy her. What else can you find out about her? This is, uh, I didn’t really get any, this information about what kind of a person she is. So what else do we know about this woman?

Marriage and family therapist, let’s find out more about her.

Staff: She’s been in this-

Look at her…okay, I just saw a picture of her.

LI: She’s a…okay. She did something with Heritage, Tom, so can’t be all bad. (imitating the good doctor) “You’re just mad I don’t listen to talk radio.” Yeah, no, I just don’t think you do your homework, sweetheart.

Oh, she quotes Maya Angelou!! Maya Angelou’s on the front of the website! Oh my God! Oh, get out. (gibberish) What a, what’s her, what’s, she hasn’t given one piece of common sense information.

First of all, don’t PISS OFF one of the biggest talk show hosts in the United States…

LI: We LOVE Maya Angelou on the Laura Ingraham Show. We love, I love, if you’d listened, you’d know how much I love Maya Angelou.

Dr: Well, I wish you didn’t, I wish you’d just realize, you know, that, this is a, a full time revolution.

Diane, I really appreciate it, thanks so much.

LI: Alright, stay with us on the Laura Ingraham Show, we’ll close it out.

LI: Ah, was she annoying?

LI: “Oh, if you’d listen to the show, you’d know how much I LOVE Maya Angelou.” She didn’t even know what I was talking about, I totally goofed on her.

Staff: Yeah, mean-meanwhile, the listeners are…

LI: You guys, when she said she’d never listened to radio, I just couldn’t hold it back, I was so livid.

DON’T COME ON MY SHOW if you’ve never even bothered to even listen to it online. I just would never go a show that I’ve never heard before, unless it was like a local, you know, radio show that I had to do a book tour for.

LI: What’s odd is that, this Diana, Diane Sollee is pretty conservative, but she’s, she’s just a dummy on how to push her stuff.

I love that, “You’re just mad that you said, I said…” Well, big mistake, sweetheart.

What a nightmare! Alright, good job you guys. Good job.