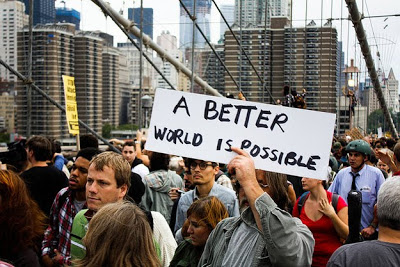 The Occupy Wall Street movement really frightens the Right Wing. It is not frightening to the Right because of Congressman Eric Cantor’s feigned fear of “the mob” that is “occupying our cities.” It is not frightening because anyone is really worried that Glenn Beck is correct when he predicts that the protesters will “come for you, drag you into the street, and kill you.”

That’s not why they are really frightened — that’s the Right trying to frighten everyday Americans.

There are five reasons why the Right is in fact frightened by the Occupy Wall Street movement. None of them have to do with physical violence — they have to do with politics. They’re not really worried about ending up like Marie Antoinette. But they are very worried that their electoral heads may roll.

All elections are decided by two groups of people:

The Occupy Wall Street Movement is so frightening to the Right because it may directly affect the behavior of those two groups of voters in the upcoming election.

1. The Narrative. People in America are very unhappy with their economic circumstances. As a result the outcome of the 2012 election will hinge heavily on who gets the blame for the horrible economy — and who the public believes, or hopes — can lead them into better economic times.

For several years, the Tea Party-driven narrative has been in the ascendance to explain America’s economic woes. Its vision of the elites in government versus hard-working freedom-loving people has heavily defined the national political debate.

Of course at first glance it’s an easy case for them to make. The president, who is the head of the over-powerful, “dysfunctional” government, is in charge. Things aren’t going well — so he, and the government he runs, must be at fault.

The Occupy Wall Street movement has helped force the alternative narrative into the media and public consciousness. The recklessness and greed of the big Wall Street banks, CEO’s, and top one percent — those are the culprits who sunk the economy and who have siphoned off all of the economic growth from the middle class. They and their enablers in Congress — largely Republicans — are the problem. To address the underlying economic crisis facing everyday Americans we must rein in their power.

This narrative is very compelling and, of course, it is true. It’s not that many voices haven’t framed the debate in these terms for years. But by creating a must-cover story, the Occupy Wall Street movement has forced it onto the daily media agenda. That is great news for progressives. The longer it continues, the better.

Right Wing pundits have disparaged the Occupy Wall Street movement for not having specific “policy proposals” — but the Right knows better. The Occupy Wall Street movement is advocating something much more fundamental. It is demanding a change in the relations of power — reining in the power of Wall Street, millionaires, and billionaires — the CEO class as a whole. It is demanding that everyday Americans — the 99% — share in the increases in their productivity and have more real control of their futures — both individually and as a society. Now that’s something for the Right to worry about.

In 2008, Barack Obama won that battle hands down. The Tea Party Movement muddied the water. They portrayed themselves as “don’t tread on me” populist outsiders doing battle with President Obama, the elite liberal insider.

Of course this ignores that the Tea Party was in many ways bought and paid for by huge corporate interests — but in the public mind it was a very compelling image.

The Right Wing has always had its own version of “class conflict.” Its “ruling class” is defined as the elite, intellectuals, bureaucrats, entertainers, and academics that are out to destroy traditional values and undermine the well-being of ordinary Americans.

The Occupy Wall Street movement, coupled with the movements in Wisconsin and Ohio earlier this year, presents an entirely different — and accurate — picture of who is on the inside and who is not.

3. Momentum. Politics is very much about momentum. Human beings are herding creatures — they travel in packs. People like to go with the flow. Whether in election campaigns, or legislative proposals, or social movements, or football games — the team with the momentum is much more likely to win.

The Occupy Wall Street movement has put the progressive forces in society on the offense — it has begun to build progressive momentum.

4. Movement. The Occupy Wall Street movement has managed to turn itself into a real “movement.” Movements don’t involve your normal run-of-the-mill organizing. Normally organizers have to worry about turning out people — or voters — one person or one group at a time. Not so with movements.

That’s what makes them so potentially powerful — and so dangerous to their opposition.

Often movements are sparked by unexpected precipitating events — like the death of the fruit stand vendor in Tunisia that set off the Arab Spring. Sometimes they build around the determined effort of a few until that critical mass is reached.

In all cases movements explode because the tinder is dry and one unexpected spark can set off a wildfire.

The Occupy Wall Street movement in New York has spread to scores of cities — and the fire shows no sign of flaming out. It will fuel the engagement and remobilization of thousands of progressive activists and volunteers who had been demobilized and demoralized by the sausage-making of the DC legislative process. That is a huge problem for the right that was counting on despondency and lethargy among progressives to allow them to consolidate their hold on political power in 2012.

5. Inspiration. More than anything else, in order to mount a counter-offensive against the Right wing next year, progressives need to re-inspire our base. We need to re-inspire young people and all of the massive corps of volunteers who powered the victory in 2008.

Inspiration is critical to mobilization. It is also critical to persuasion. Swing voters want leaders who inspire them.

Inspiration is not about what people think — it’s about what they feel about themselves. When you’re inspired you feel empowered. You feel that you are part of something bigger than yourself, and that you — yourself — can play a significant role in achieving that larger goal.

The Occupy Wall Street movement has begun to inspire people all over America. That’s because people are inspired by example. They themselves are inspired if they see others standing up for themselves — speaking truth to power — standing up in the face of strong, entrenched opposition. People are inspired by heroic acts — by commitment — by people who say they are so committed that they will stay in a park next to Wall Street until they make change. That’s what happened in Egypt and Tunisia. That’s what happened in Wisconsin this spring.

The legacy of the Occupy Wall Street movement could very well be the re-inspiration of tens of thousands of Progressives — and the engagement of young people that are so important to the future of the progressive movement in America.

Right-wingers will plant provocateurs in an attempt to stigmatize the Occupy Wall Street movement with violence — to make it look frightening. But if the Movement continues with the kind of single-minded purpose and commitment that we have seen so far, the Occupy Wall Street movement may very well make history. It has already become an enormous progressive asset as America approaches the critical crossroad election that could determine whether the next American generation experiences the American Dream or simply reads about it in their history books.

[Robert Creamer is a long-time political organizer and strategist, and author of the book: Stand Up Straight: How Progressives Can Win, available on Amazon.com. He is a partner in Democracy Partners and a Senior Strategist for Americans United for Change. Follow Robert Creamer on Twitter: www.twitter.com/rbcreamer. This article was originally published at Huffington Post and was distributed by Progressive America Rising.]

3 Responses to Robert Creamer : Why the Occupy Wall Street Movement Frightens the Right