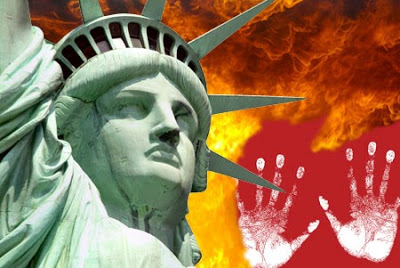 Graphic from SodaHead.
Imperial delusions:
Ignoring the lessons of 9/11

Being right means nothing if we failed to create a more just foreign policy conducted by a more humble nation.

Ten years ago, critics of America’s mad rush to war were right, but it didn’t matter.

Within hours after the 9/11 terrorist attacks, it was clear that political leaders were going to use the attacks to justify war in Central Asia and the Middle East. And within hours, those of us critical of that policy began to offer principled and practical arguments against aggressive war as a response to the crimes.

It didn’t matter because neither the public nor policymakers were interested in principled or practical arguments. People wanted revenge, and the policymakers seized the opportunity to use U.S. military power. Critical thinking became a mark not of conscientious citizenship but of dangerous disloyalty.

We were right, but the wars came.

The destructive capacity of the U.S. military meant quick “victories” that just as quickly proved illusory. As the wars in Afghanistan and Iraq dragged on, it became clearer that the position staked out by early opponents was correct — the wars not only were illegal (conforming to neither international nor constitutional law) and immoral (fought in ways that guaranteed large-scale civilian casualties and displacement), but a failure on any pragmatic criteria.

The U.S. military has killed some of the people who were targeting the United States and destroyed some of their infrastructure and organization, but a decade later we are weaker and our sense of safety more fragile. The ability to dominate militarily proved to be both inadequate and transitory, as predicted.

Ten years later, we are still right and it still doesn’t matter.

There’s a simple reason for this: Empires rarely learn in time, because power tends to dull people’s capacity for critical self-reflection. While ascending to power, empires believe themselves to be invincible. While declining in power, they cling desperately to old myths of remembered glory.

Today the United States is morally bankrupt and spiritually broken. The problem is not that we have strayed from our founding principles, but that we are still operating on those principles — delusional notions about manifest destiny, American exceptionalism, the right to take more than our share of the world’s resources by whatever means necessary. As the United States grew in wealth and power, bounty for the chosen came at the cost of misery for the many.

After World War II, as the United States became the dominant power not just in the Americas but on the world stage, the principles didn’t change. U.S. foreign policy sought to deepen and extend U.S. power around the world, especially in the energy-rich and strategically crucial Middle East; always with an eye on derailing any Third World societies’ attempts to pursue a course of independent development outside the U.S. sphere; and containing the possibility of challenges to U.S. dominance from other powerful states.

Does that summary sound like radical hysteria? Recall this statement from President Jimmy Carter’s 1980 State of the Union address:

An attempt by any outside force to gain control of the Persian Gulf region will be regarded as an assault on the vital interests of the United States of America, and such an assault will be repelled by any means necessary, including military force.

Democrats and Republicans, before and after, followed the same policy.

The George W. Bush administration offered a particularly intense ideological fanaticism, but the course charted by the Obama administration is much the same. Consider this 2006 statement by Robert Gates, who served as Secretary of Defense in both administrations:

I think the message that we are sending to everyone, not just Iran, is that the United States is an enduring presence in this part of the world. We have been here for a long time. We will be here for a long time and everybody needs to remember that — both our friends and those who might consider themselves our adversaries.

If the new boss sounds a lot like the old boss, it’s because the problem isn’t just bad leaders but a bad system. That’s why a critique of today’s wars sounds a lot like critiques of wars past. Here’s Martin Luther King, Jr.’s assessment of the imperial war of his time:

[N]o one who has any concern for the integrity and life of America today can ignore the present war. If America’s soul becomes totally poisoned, part of the autopsy must read: Vietnam. It can never be saved so long as it destroys the deepest hopes of men the world over.

Will our autopsy report read “global war on terror”?

That sounds harsh, and it’s tempting to argue that we should refrain from political debate on the 9/11 anniversary to honor those who died and to respect those who lost loved ones. I would be willing to do that if the cheerleaders for the U.S. empire would refrain from using the day to justify the wars of aggression that followed 9/11. But given the events of the past decade, there is no way to take the politics out of the anniversary.

We should take time to remember the nearly 3,000 victims who died on 9/11, but as responsible citizens, we also should face a harsh reality: While the terrorism of fanatical individuals and groups is a serious threat, much greater damage has been done by our nation-state caught up in its own fanatical notions of imperial greatness.

That’s why I feel no satisfaction in being part of the anti-war/anti-empire movement. Being right means nothing if we failed to create a more just foreign policy conducted by a more humble nation.

Ten years later, I feel the same thing that I felt on 9/11 — an indescribable grief over the senseless death of that day and of days to come.