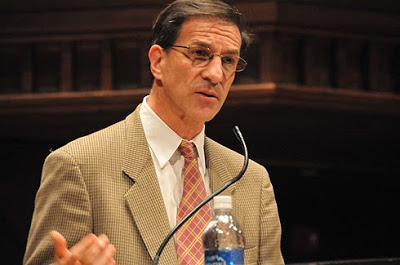 The executive editor of the paper responded with a sensible defense of the paper’s decision to keep Bronner in that position.

Although it had the appearance of a spirited exchange, the “debate” was a tired old diversion that keeps us from facing more important questions, not just about the Israel/Palestine conflict but about U.S. journalists’ coverage of the world. As is typical in mainstream journalists’ discussions of journalistic neutrality and objectivity, the focus on an individual obscures more important questions about the institutions for which individuals work and the powerful forces that shape those institutions’ picture of the world.

The question posed by the Times officials is framed in the narrowest terms: Could Bronner maintain his neutrality and objectivity given those family circumstances, or was that indirect connection to one side of the war “still too close for comfort,” in public editor Clark Hoyt’s words.

In his Sunday column, Hoyt described Bronner as a “superb reporter” but concluded that the paper should reassign him to avoid the appearance of a conflict of interest. Executive editor Bill Keller argued that such a policy would disqualify many reporters from assignments that draw on their specialized knowledge and diminish the quality of the reporting in the paper, and concluded there is no reason to reassign Bronner.

The problems with the coverage of the Israel-Palestine conflict in the Times, and virtually every other corporate-commercial news outlet in the United States, are not the result of biases of specific reporters, though individual reporters may indeed have allegiances to one side of an issue.

The mainstream media have a conflict of interest at a deeper level — they are unwilling to break with the conventional wisdom about the conflict that dominates in the United States, especially among U.S. policymakers. U.S. news coverage of the conflict relentlessly presents the news within this Israeli narrative, primarily because powerful forces in this country find that narrative useful for U.S. strategic interests in the region, and U.S. journalists tend to fall in line with that view.

As one well-known mainstream reporter once grudgingly admitted to students at my university, American journalism tends to “follow the flag.” In this case the U.S. flag is planted firmly on the Israeli side of the conflict.

If that strikes you as harsh, try a thought experiment. Imagine the controversy that might arise if a Muslim-American or Arab-American correspondent married to a Palestinian had a child who joined Hamas or some other Palestinian political/military organization. Does anyone think the executive editor of the paper would defend the reporter so vigorously?

At the very least, the reporter would be expected to disavow any sympathy for Hamas and denounce the group’s use of terrorism. Even if the correspondent offered such denunciations, a reassignment would be likely.

No, because the Israeli narrative — the one that U.S. policymakers endorse — does not acknowledge that systematic violence against Palestinian civilians to advance Israeli political goals is, in fact, terrorism.

Independent reports, of which the U.N.’s “Goldstone Report” is simply the latest, make it clear that such violence is a consistent feature of Israeli policy, but in this Israeli/U.S. narrative, such violence is presented as self-defense. So, Bronner can’t be asked to denounce a reality that the narrative does not recognize.

This is what is called neutrality and objectivity in mainstream journalism. Power establishes the framework, and reporting goes on within that framework. Some journalists find inventive ways to find the fissures in the system, allowing some coverage that offers an alternative view, but the pattern of coverage remains constrained by the dictates of the powerful.

So, in the Israel/Palestine conflict, U.S. reporters accept the dominant narrative of the legitimacy of Israeli violence to maintain control over the land and resources that Israel wants to retain. Palestinians argue that Israel is a colonial settler state that uses the predictably violent tactics of such states, ignoring international law and moral principles in large part because U.S. diplomatic, economic, and military support provides cover.

Most of the world supports Palestinian resistance, while in the United States the public is mostly unaware of the basic facts of the conflict. (For an excellent analysis, see the film Peace, Propaganda and the Promised Land: Media and the Israel-Palestine Conflict.)

When supporters of Palestinian rights in the United States complain about the incomplete or distorted nature of U.S. coverage, they usually are swept up in a he-said/she-said battle with the more reactionary faction of Israeli supporters. Mainstream journalists typically see themselves as embattled truth-tellers, fending off ideologues and absorbing invective from each side.

So, Keller lauds Bronner for reporting “scrupulously and insightfully on Israelis and Palestinians for many years,” which is an accurate assessment of Bronner’s work if one accepts the Israeli/U.S. narrative of self-defense as authoritative. Within that narrative, reporters such as Bronner can raise questions about the most troubling examples of Israeli violence, so long as the basic framework is accepted. This allows Keller to stand tall, declaring that “pandering to zealots means cheating readers who genuinely seek to be informed.”

Are there zealots on both sides, ideologues who don’t care about facts and want the news to reflect their vision of the world? Of course — the world is full of such people on many issues. But that says nothing about whether the Times’ de facto adoption of the Israeli/U.S. narrative in its reporting is defensible.

If U.S. journalists reduced their reliance on official sources and considered challenges to the way U.S. policymakers define the conflicts of the world, they might be able to resist the tendency to follow the flag. (The phrase, by the way, was used by former CBS News anchor Dan Rather during a speech in which he acknowledged that U.S. reporting, including his own, about the 1991 Gulf War often was flawed.)

If U.S. journalists could break out of the frameworks of the powerful, they would have to take up the more difficult work of coming to a truly independent assessment of such conflicts. That kind of journalism is crucial not only to hopes for real justice and peace in the Middle East, but also to the hopes for deeper democracy in the United States.

4 Responses to Robert Jensen : Mainstream Media and the Conventional Wisdom