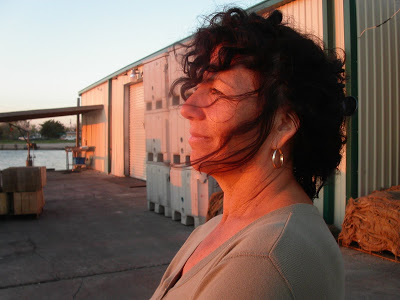 Legendary Texas journalist Molly Ivins once joked about rebel-rouser-activist Jim Hightower: “If Will Rogers and Mother Jones had a baby, Jim Hightower would be that child — mad as hell, with a sense of humor.”

Well, Hightower has a protest soul sister, the inventive, congenial, yet fierce “eco-outlaw” named Diane Wilson. Unlike armchair activists and witty journalists, this champion takes risks, gets bloodied and arrested, and endures jail — then turns her adventures into good-hearted, epic tales reminiscent of Mark Twain.

And what progressive battles need, more than ever, are inspiring protest leaders — and crowds in the street. Otherwise, we fail to learn from the insipid, conspiracy-ridden, if effective escapades of the Tea Party. One hard-won lesson I take from this hell-raising muckraker from Seadrift, Texa, is that petitions, donations, columns, and news interviews are nice but don’t save lives, jobs, America, or Mother Earth.

Diane was featured in a terrific PBS documentary called Texas Gold, voiced by Peter Coyote, and, with Coyote, produced a hilarious satirical commercial for the film — about bottled Gulf water you get to drink once. Wilso was interviewed on Amy Goodman’s Democracy Now!, and performs daring CodePink disruptions. [Wilson was, in fact, a founding member of CodePink, the theatrical direct-action peace group.]

Diane has also penned two inspiring protest memoirs — real-life, laugh-out-loud, unflinching stories reliving what happens when a terrific activist puts her liberty on the line. This woman walks the line, until she gets forcibly removed. Her two full titles alone justify the price of admission:

Her tactics are “unreasonable,” of course, only to cancer-inducing, worker-killing resource predators (well-shielded by official protection) whom she ambushes with inventive schemes. Eco-activism here is downright fun, mostly, like anti-war ’60’s agitation (though absent the crowds). She invites all of us to do local agitation.

Where she’s best known as Corporate Criminal Enemy No. 1 is Calhoun County, Texas, which — alas, B.D. (Before Diane) — was a remote, Gulf coast pushover ripe for chemical dumpers, and by 1989 had won the EPA’s dubious prize as America’s most polluted place. That shocker woke Diane up, and she’s been confronting polluters (and now related war-mongers) ever since. 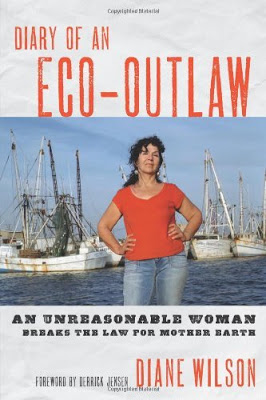 I found out about Diane because my wife is writing a young adult novel and needed to check background about the Gulf, shrimping, and endangered sea turtles. So, who better to learn from than the liveliest, most notorious, ex-professional Gulf shrimper living between Galveston and Corpus Christi?

Naturally we jumped in the van and drove eight hours when hearing Diane was to keynote a women’s literary celebration in Santa Barbara. Her simple if hard to execute message: trust your heart, assess the damage, disregard most well-intentioned warnings and, above all, don’t sweat outcomes impossible to know in advance.

Progressives are forever talking and talking about direct protests, so time to learn from Diane’s fearless bravery, lit up by over 50 arrests. Would be 100 were she less even-tempered, her outrage tempered by quiet irony and southern courtesy, even to abusers.

She never hides, however, the fact that maximizing bad publicity against huge public menaces means getting roughed up, inconvenienced, and punished. The system discourages disruption and, judging by her harsh prison depictions, many here would pipe up, “Is there a Plan B?”

Here’s that tale, begun when “nobody particular” — right! — donned a hardhat, hitched a ride into the Dow Chemical plant, thus breaching its vaunted security, and unfurled this heinous banner: “Dow Responsible for Bhopal.” After which ensued 10 hours of Keystone Cops commotion, during which time our chained (thus hard-to-move) heroine was bloodied by a sadistic SWAT team, straitjacketed, whisked to the hoosegow, and eventually found guilty of criminal trespassing.

Protesting starts with intimidation on both sides. Apparently, in Calhoun County, Texas, educating folks about inhumane, criminal behavior is itself criminal — whereas officials dumping tax incentives to encourage the unregulated poisoning of the community’s most valuable resource, once lovely bay waters — no problema. Live jobs trump dead dolphins or toxic shrimp.

Diane then doubled her outlaw-rebel trademark by refusing to show up for prison. Talk about direct, predatory protest drones to offset all the fancy PR industry “goodwill” (payoffs like police cars, computers, and the like). What’s four-months prison time for “nobody particular” versus paltry wrist slaps to the Union Carbide CEO whose plant leaked so much lethal gas it wiped out a good-sized city while poisoning 500,000 others.

This episode encapsulates the plucky Wilson Way — brash, non-violent, dramatic, low-cost — and with a rippling unpredictability that unnerves testy execs. What makes Diane crazy like a fox, a match for the planet’s most shameless polluters (Dow, Alcoa, BP, Dupont and Formosa Plastics), is an uncompromising refusal to sweat outcomes. 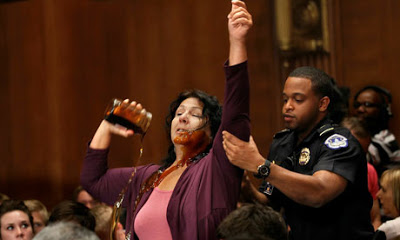 Diane Wilson is arrested after pouring oil over herself during an appeareance by BP CEO Tony Hayward before a Congressional hearing in 2010. Photo by Chip Somodevilla / Getty Images.
Commit all the way

Diane elevated the “Just do it” notion before the shoe brand. Why limit unknowable results, she implies, with Obama-like, risk-averse “pragmatism,” or entrenched group cautiousness, when you’ve got Wilson’s full-throated impulsiveness, inspiration, and fearless nonchalance on your side? From Diary of an Eco-Outlaw:

I can truthfully say that I’ve never planned a single action that I was in charge of. I’ve never thought of the outcome or the ending. My actions were not outcome driven. That’s not what propelled me. It was the urgency of the moment affecting my heart. I didn’t care if there was no hope. I didn’t care if no one was with me. I didn’t care if what I did would end there that day. I could be on the losing side. I could go to jail.

Wilson amplifies John Lennon’s quip, “Life is what happens while you’re busy making other plans,” for she disowns planning, beyond scheduling the next cunning expose of corporate wickedness. And by any standards, Diane’s career achievement is impressive, awarding her highest honors in the nation’s demanding, shit-disturbing sweepstakes.

She shows how much one, non-ideological woman can do without initial fame, private angels or fortune, fancy friends in high office, or big alliances with well-heeled NGOs.

Her blend — sacrifice, risk-taking, trusting herself, and widening horizons (now anti-war) — identifies a true western maverick, literally an “unbranded calf.” In fact, the term “maverick” celebrates the independent, progressive Texas family of that name. There’s nothing right-wing or authoritarian about mavericks; au contraire, they boldly battle both the status quo and status holders.

True political mavericks like Diane insist those hell-bent on making money must not then negligently unmake the earth: thus, no industry is above federal clean air and water laws, or has the right to inflict cancer along with its paycheck, or devastation on treasured community resources.

Is this logic too hard for chemical companies — and public officials — or what?

[Robert S. Becker was educated at Rutgers College (BA) and UC Berkeley (Ph.D, English). Becker left university teaching (Northwestern, U. Chicago) for business, founding and heading SOTA Industries, a high-end audio company, from ’80 to ’92. From ’92-02 he did marketing, consulting, and writing; since 2002, he has been scribbling on politics and culture, looking for the wit in the shadows. This article was originally published at — and was distributed by — OpEd News.]