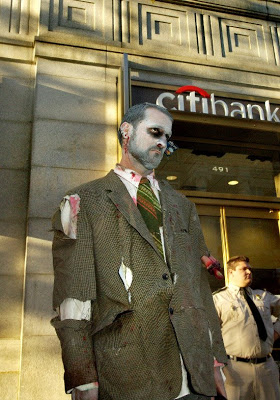 
Except for the bankers and the Obama administration, the prevailing reaction of many prominent economists is not one of optimism.

The latest news headlines say that as the result of federal stress testing, some of the biggest US banks are likely to fail if hard times continue. The numbers proposed to correct the bank problem don’t seem too large. Except for the bankers and the Obama administration, the prevailing reaction of many prominent economists is not one of optimism. For one, the widely read Paul Krugman is not too hopeful about the current situation:

“. . .I won’t weigh in on the debate over the quality of the stress tests themselves, except to repeat what many observers have noted: the regulators didn’t have the resources to make a really careful assessment of the banks’ assets, and in any case they allowed the banks to bargain over what the results would say.

A rigorous audit it wasn’t. But focusing on the process can distract from the larger picture. What we’re really seeing here is a decision on the part of President Obama and his officials to muddle through the financial crisis, hoping that the banks can earn their way back to health.

It’s a strategy that might work. After all, right now the banks are lending at high interest rates, while paying virtually no interest on their (government-insured) deposits. Given enough time, the banks could be flush again.

But it’s important to see the strategy for what it is and to understand the risks. Remember, it was the markets, not the government, that in effect declared the banks under-capitalized… given the possibility of bigger losses in the future, the government’s evident unwillingness either to own banks or let them fail creates a heads-they-win-tails-we-lose situation.

If all goes well, the bankers will win big. If the current strategy fails, taxpayers will be forced to pay for another bailout. But what worries me most about the way policy is going isn’t any of these things. It’s my sense that the prospects for fundamental financial reform are fading…”

So how big is the bad debt problem? The federal stress test predicts that the Bank of America will only need about $35 billion to survive the crisis. Yet it has securities in its portfolio worth a staggering $38 trillion, or more than a thousand times as much! In other words, Timothy Geithner’s proposed solution is not anywhere near in scale with the probable debt problem, and it may need a miracle to succeed

”…According to author F. William Engdahl:

Five US banks, according to data in the just-released Federal Office of Comptroller of the Currency’s Quarterly Report on Bank Trading and Derivatives Activity, hold 96 per cent of all US Bank derivatives positions in terms of nominal values, and an eye-popping 81 per cent of the total net credit risk exposure in event of default.

The banks that are too big to fail, yet are drowning in red ink, are being termed “zombie banks.” These banks are being kept on life support through emergency federal cash injections on a case by case basis. Some economists, like the recently successful Wall Street prophet Roubini, say we should just let the zombies fail:

“The U.S. government should let its weakest banks fail, argues economist Nouriel Roubini, whose pessimistic forecasts have earned him the moniker Dr. Doom. Roubini and fellow New York University economist Matthew Richardson, writing in the Financial Times, ask the question: ‘Why keep insolvent banks afloat?’ Their answer: ‘We believe there is no convincing answer; we should instead find ways to manage the systemic risk of bank failures.’ The bank stress tests ‘could have facilitated this process,’ the duo explain. The problem is, ‘the tests, which measure how viable banks are under adverse economic conditions, have no “failed” category, even if as many as 10 are reported to need additional capital,’ they write…”

One genuinely progressive solution to the zombie bank syndrome might be to create a parallel system of closely regulated and guaranteed-to-be-solvent federal banks. A sort of people’s banking system to underwrite the vital functions of government. There are some very bright economists who support this concept of a parallel public banking system; a sort of a banking safety net to shield the “personal sector.”

Levy Economics Institute economist Elias Karakitsos has collected some basic numbers relating to the zombie bank problem, and supports a parallel bank solution. In effect, the proposed solution is to set up healthy banks and then let the air out of the over-leveraged banking bubble gradually, since a cold turkey approach might crash the US financial system. See page 5, entitled “A ‘Good Bank’ with a Personal Sector Shield: A Viable Solution.”

“The conclusion that emerges from this analysis, therefore, is that the ‘good bank’ solution carries a risk that the entire economy may sink into a worse depression than in the 1930s.”

Our current federal policy of bailing out Detroit might possibly fit the description of what a wise and sound public bank should be doing, assuming that we really have a plan to make a transition to sensibly restructure the car industry. There are many important social needs that are not profitable enough to attract the shell-shocked private investment bankers. Things like retooling for rail transit, preserving our basic industrial muscle, while preparing to decentralize agriculture. Such strategic investments that make good sense in preparation for a leaner energy future. But we are not making this shift, as Jim Kunstler acidly observes.

Many economists long to see the Obama’s Administration make a commitment to a deep reform of the banking system; one sufficient to cure the problem and prevent its recurrence. A lot of the current job creation by the Obama administration is disappointing in character, and does not seem to be based on an inspiring vision.

Assuming that we do somehow manage to make a transition to a healthier banking system, we should also take the next oil shock into account. We cannot ignore the key role that high oil prices played in triggering the current economic and banking crisis in 2008. Since world oil production has probably already peaked, a return to a tight oil market and another debilitating oil shock seems all but certain within a few years. If the dollar is devalued by inflation, the problem of buying imported oil will be compounded:

Meanwhile, some like Mr. Goldman, below, argue that we are too pain-adverse to exorcise our banking demons, through nationalization and major economic cleansing. And furthermore, that trying to do so would not be likely to work. So we prop up our zombie banks with as much federal credit as is needed to prevent their collapse and stall for time. The guys in charge of the US Treasury and the Federal Reserve seem decidedly short on solutions, other than providing enough easy federal credit to keep the zombies alive. This might work for awhile, but at some point the currently sluggish dollars we are injecting will start actively bidding for oil and food, whereupon hyperinflation could make things get truly exciting.

The following is from “Profit-Taking Opportunity for Banks” by David Goldman:

“…Nationalization never-never-never was going to happen because if it did, the rest of the financial system (e.g., insurers) would go with it, and shortly afterward the credit of the United States. This should have been obvious to anyone with an abacus, let alone a spreadsheet program.

The clowns in the Obama administration lurched drunkenly from one stupid scheme to another, confusing the market no end, until they settled on the only thing that they could do: let the banking system remain in a zombie state indefinitely. Zombie, as I kept telling you, was as good as it gets. I said this in mid-March at the bottom of the market. This was an easy call. It like watching a very stupid lab rat run a maze. The rat might double back or spin circles, but eventually it would find the exit by trial and error. So much for the great genius of Larry Summers.”

I think Goldman is right. Whenever the big banks go down, then the dollar will likely get dragged down too, and discredited as the world’s standard reserve currency. With no stable way to store wealth except gold, international trade, already suffering, is likely to get really tough.