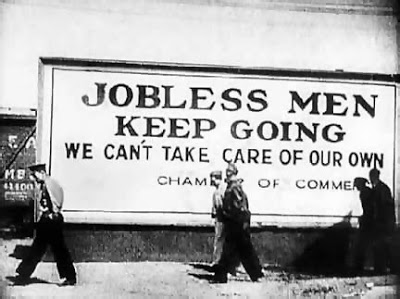 Great Depression: Sign of the times.
‘This is not something like the Great Depression that can be corrected by a decade of hard times and even war’
By Roger Baker / The Rag Blog / September 16, 2008

I think that now that everyone is becoming aware that we are in a severe economic crisis (which became acute in August 2007 but has been papered over until now), that we should be realistic about its causes and prognosis for recovery.

This is not something like the Great Depression that can be corrected by a decade of hard times and even war and then things gradually recover on an endless upward spiral with ever more consumer goodies. This crisis (maybe “The Crash of 2008”) is about bumping up against the natural limits of the global economy to expand any more on a stressed-out planet.

Capitalist economies demand exponential growth to pay interest on investments to survive. The best visionaries have known since King Hubbert and the energy crisis of the 1970s that we would peak in world oil production some time around the year 2000, and that cheap fossil fuel energy is the limiting factor for the growth of modern industrial economies.

Therefore our modern industrial economies can’t recover from this economic crisis without a deep restructuring of capitalism that somehow breaks its deep dependence on exponential growth.

If a lack of cheap oil for transportation were not the limiting factor, it would then soon be fresh water or greenhouse gases, or arable cropland or some combination of all of these.

I am not a leading thinker on this stuff, but I have a taste of the truth and want to spread the word to those capable of listening and checking out the facts.

Read all of James Howard Kunstler’s stuff like the Long Emergency and his blog.

Read all Richard Heinberg’s stuff including The Party’s Over and his latest: Peak Everything. His blog is called Museletter.

Check out Julian Darley’s Post Carbon Institute . It’s trying to lay the basis for a transition to a community based post industrial economy.

The titans of Wall Street still don’t understand what has hit them and that conventional recovery through a materialist expanding economy is now impossible. Economic recovery will have to take the form of limiting population and living modestly and communally, and in sustainable harmony with nature, guided by the best modern scientific knowledge.

3 Responses to Roger Baker : This Ain’t Your Father’s ‘Economic Crisis’