Ron Jacobs :
BOOKS | ‘Technocreep’ and how we are seduced by surveillance

Thomas Keenan has written a helpful description of the kinds of surveillance undertaken by corporations, governments, criminal enterprises, and just plain creeps every second of every day. 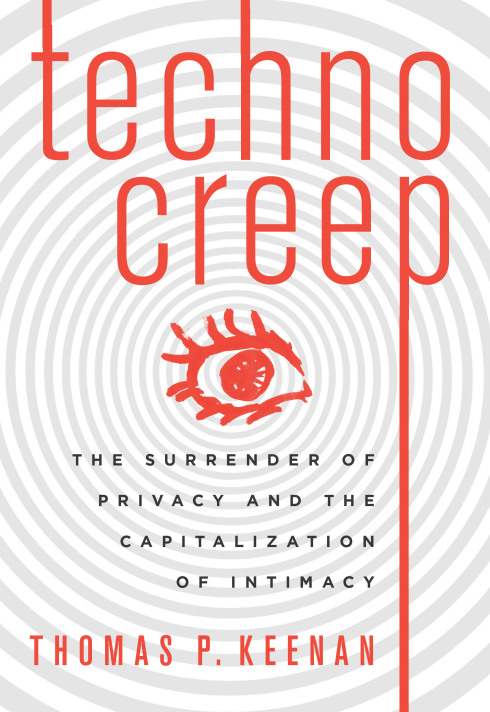 The use of the word “creep” is a play on its multiple meanings.

[Technocreep: The Surrender of Privacy and the Capitalization of Intimacy by Thomas P. Keenan (Sepember 2014: Greystone Books); Paperback; 224 pp; $17.95.]

We live in a world overwhelmed with intrusive technological gadgets. Most of us have learned to live with this fact and many of us have even embraced it. The latter are those who have apps to close their garage door and check the lights at home while they wait for their plane in an airport a thousand miles away. They are also those who post everything they eat and do on social media apps that then store this information for eternity.

The omnipresence of social media and the technology that makes it possible have created a serious ethical situation regarding the question of personal privacy. For agencies where ethics are nothing more than a minor hindrance — government intelligence agencies and organized crime for example — this technology is a godsend. What once required actual feet on the ground and snooping inside homes and other private property can now take place from an office cubicle with a laptop.

When one considers the voluntary provision of too much information (or TMI as the popular acronym proclaims) that social media encourages, one can understand even better why the aforementioned agencies truly appreciate the new Internet-related gadgetry.

Government agencies and criminal enterprises are not the only entities enjoying the new availability of personal information. Corporations are too. As most people know, every keystroke and touch screen touch is recorded by any number of internet robots, stored and then regurgitated as an advertisement.

This creates occasionally humorous buying suggestions for the user and annoying advertisements that assume too much and transform every interaction into a commercial possibility. This is an ideal metaphor for the neoliberal capitalist world we live in; it is also a disturbing trivialization of our ever-more-trivial lives.

There is also an element of the entire Internet snooping abilities that is, for the lack of a better word, just plain creepy. This element is one that Internet security guru and University of Calgary professor Thomas P. Keenan addresses in his new book, Technocreep: The Surrender of Privacy and the Capitalization of Intimacy.

It’s clear from the title that the use of the word “creep” is a play on its multiple meanings. It is also clear that the book is about much more than just the potential creepiness of unwanted Facebook “friending” or inappropriate and offensive advertisements appearing in one’s social media account. Indeed, the true focus of the book is the steady integration of this technology into not just our public lives, but also our intimate existence.

Furthermore, perhaps the most unpalatable aspect of this technocreep is that it is done under the pretense that it is to the social media users’ benefit, when in actuality its only real purpose is to further atomize human existence; an atomization designed by and for a capitalism that demands greater and greater numbers of consumer units to satisfy its ravenous needs.

Keenan’s approach utilizes anecdotes and facts. Some of the anecdotes are humorous even as they uncloak one more invasive intention of the surveillance web. Others are not funny at all, evoking paranoia well beyond that which Winston Smith and Julia lived under in George Orwell’s 1984.

Technocreep is not a call to arms, nor is it a hacker’s handbook. However, behind and beyond the seemingly never-ending description of tools designed to record the most intimate details of our lives and store them for corporate and governmental powers, Keenan hints that the only certain method to prevent total surveillance and domination is by outsmarting the corporate-owned geeks who design the code and devices being used to create this panopticon.

In other words, anti-corporate/government hacking is legitimate self-defense. Keenan does not provide instructions on how to hack, but he does end his book with a list of tips on how one can make it more difficult for snoops to do their snooping.

If nothing else, Kennan has written a helpful description of the kinds of surveillance undertaken by corporations, governments, criminal enterprises, and just plain creeps every second of every day. He presents that description with humor and a knowledge that comes from years in the industry. There is also a healthy mistrust of those who write the laws, and we see how easily those laws are not only ignored, but irrelevant before their ink is dry, thanks to the much quicker pace of technology.

This book should be read by anyone who uses a smartphone, computer, or other device connected to the Internet. It won’t make you feel better, but at least you’ll know what you’re up against.