Ron Jacobs : From Wounded Knee to Idle No More 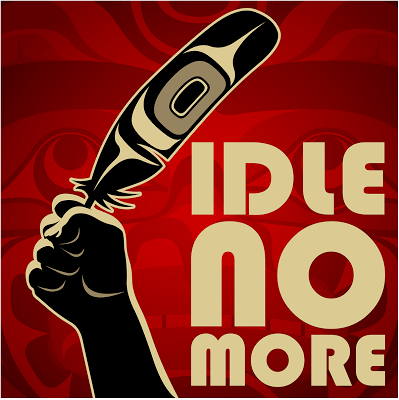 Image by Andy Everson from Huffington Post.
From Wounded Knee to Idle No More

The movement is slowly spreading to the indigenous nations of the northern United States, which have seen their lands ravaged numerous times over the course of history in the name of resource extraction.

The American Indian Movement’s (AIM) best known and most controversial protest began in February 1973 in Wounded Knee, South Dakota, a small town on the Pine Ridge reservation. Wounded Knee Two began as a conflict within the Oglala Lakota (Sioux) tribe between the supporters of the tribal Chairman Richard Wilson and other tribal members who considered him to be a corrupt puppet of the Bureau of Indian Affairs (BIA).

Like many other such conflicts, it had simmered for a while. In 1973, the disagreements between the two segments of the Pine Ridge Lakota Sioux created so much anger and division that both sides ended up arming themselves. The forces allied with Wilson, along with Federal law enforcement officials and U.S. military, entered into a 71-day siege of the AIM forces.

When the siege ended on May 9, 1973, two Native American members of AIM were dead and an unknown number were wounded on both sides. Richard Wilson remained in office and was challenged in the next election. Many AIM members spent the next years in litigation, in exile, and in prison.

Several more armed conflicts erupted in the wake of the siege, in large part due to continuing counterintelligence programs and vigorous prosecutions that targeted AIM members. The most well-known of these cases is that of Leonard Peltier who remains in prison because of an at-best questionable conviction in the death of an FBI agent in 1975.

Although I was living in Germany at the time, the occupation came close to home. A classmate of mine whose family was connected to Pine Ridge left his senior year in early March to participate. His father was supportive, despite his rather contradictory role as part of the U.S. Army’s infantry. Indeed, it is likely that while he was in Vietnam he participated in campaigns named after earlier military actions against his own people.

As anyone who heard about the U.S. Navy’s killing of Osama bin Laden knows, the practice of naming military actions after indigenous Americans continues; that operation was code-named “Geronimo.” Some U.S. Army helicopters are called “Apaches.” Furthermore, some of the most-studied generals at West Point are those who got their start, or even made their name, killing Native Americans.

So, it has been 40 years since the second face-off at Wounded Knee between members of the Lakota nation and the United States government. To be fair, the 1973 engagement was much more of a face-off than the first intrusion. If you are unfamiliar with that incident, let me tell you about it.

Early in the morning of December 29, 1890, U.S. troops went into a camp at Wounded Knee Creek to disarm the Lakota staying there. After a scuffle or two, the 7th Cavalry opened fire and killed men, women, and children, as well as some of their own fellow troopers. Those few Lakota warriors who still had weapons began shooting back at the attacking troopers, who quickly suppressed the Lakota fire.

After the shooting had stopped, at least 150 men, women, and children of the Lakota Sioux had been killed. Some believe the number of dead was closer to 300. Twenty-five troopers also died, and 39 were wounded. Many of the dead troops were the victims of friendly fire. At least 20 troopers were awarded the coveted Medal of Honor.

It’s been a long time since I was in South Dakota. The last time was in 1979. A group of friends and I were driving a VW bus across the country on our way to the San Francisco Bay Area. While traveling across the state, we stopped near the Pine Ridge Reservation to buy gas. While paying for the gas, the driver attempted to purchase a bottle of rubbing alcohol from the clerk in the store connected to the gas tanks. She looked at his long hair, his hairless face (his mother was part Cherokee) and refused to sell it to him.

He told her he needed it to clean the heads on the car’s cassette player. She called him a liar, stating that she wasn’t going to allow him to drink it and poison himself. Not wanting to argue (the area is pretty remote, after all), he paid for the gas and left the store. After he explained what had happened, I went back into the store. The clerk looked at my full beard, made me promise I wouldn’t let any “Indians” drink the alcohol, and sold me the same bottle of rubbing alcohol she had refused my friend.

We spent a good part of the next hundred miles wondering what her motivation could have been. Did she hate “Indians?” Was she doing her Christian duty? Was she just afraid that my friend was going to drink the alcohol and then his family would sue her store?

The situation of America’s indigenous people continues to be tenuous. On both continents in the hemisphere, indigenous people’s homelands and livelihoods are threatened. Gambling casinos and resource extraction operations in northern America siphon away native cultures and resources; making money for some members while furthering impoverishing others.

In southern America, people’s lands and lives are threatened on a very real fundamental level, thanks to fossil fuel exploration and farming and ranching operations designed to supply other people near and far.

Recently, a movement of native peoples (known as First Nations in Canada) calling itself Idle No More arose in Canada. The impetus for the movement is the Canadian government’s Omnibus Bill C-45. This bill seems designed to further abrogate treaty rights assigned to First Nations in order to expand resource exploration and extraction.

The movement is slowly spreading to the indigenous nations of the northern United States, which have seen their lands ravaged numerous times over the course of history in the name of resource extraction. Most recently, this has meant opening these lands to fracking and the construction of pipelines across the continent.

Despite the ongoing attempts to destroy the culture and well-being of America’s First Nations, they continue to battle despite the odds. Their struggle remains an important part of the struggle for humanity’s survival.