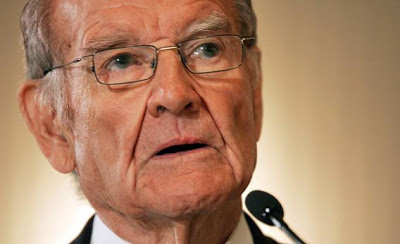 I was a senior in high school in 1972. I listened to his acceptance speech while working my summer job and campaigned for McGovern on the military base where my school was located.

Like many people of my generation, it is with a certain regret that I read about George McGovern’s passing. His campaign for the presidency was, with the possible exception of Jesse Jackson’s 1984 run, the last radical run for the White House by any member of either mainstream political party.

Made possible by changes in the way Democrats chose their candidate, George McGovern’s ascent to the Democratic Party nomination in 1972 represented the best of the United States. His campaign promises were simple. He would end the Vietnam War within 90 days of his inauguration; he would guarantee every U.S. citizen a livable income; he would limit the income of the richest Americans through taxation; and he was a fervent believer in accessible health care for all.

His first brush with presidential politics occurred in 1968 when supporters of Robert F. Kennedy approached him to replace Kennedy after he was killed in June 1968. McGovern held fast to the platform plank demanding a withdrawal from Vietnam. Unfortunately, that plank was defeated by the Humphrey apparatchiks in the party.

His opposition to the Vietnam War was the key aspect of his campaign and the reason he was supported by most people in the antiwar movement, including Yippies Abbie Hoffman and Jerry Rubin and (secretly) members of the Weather Underground.

I was a senior in high school in 1972. I listened to his acceptance speech while working my summer job and campaigned for McGovern on the military base where my school was located. Organized by a couple of civilian employees of the Defense department working in Frankfurt am Main, we were mostly high school students and recent graduates opposed to the war. Plus, we hated Richard Nixon.

In the months leading up to the election, we would station ourselves just outside the property lines of the Army’s Post Exchange (a shopping center for military personnel and their dependents) several days a week. Passing out campaign literature, bumper stickers, and buttons, we were amazed at how well we were received. GIs of all skin colors took extra copies of our literature to distribute at their barracks.

Military wives took buttons and literature and asked us not to tell their husbands. Germans walking by would take a button and tell us they hoped McGovern would win.

Of course, we also had our detractors. There was more than one time a lifer (a career military man) called me a commie and a faggot. There were even a couple times I was shoved around by a right wing GI or NCO. Officers would argue with us, telling me and my fellow campaigners that we were just naïve and should leave politics to the professionals.

My most memorable interaction was with the wife of my dad’s commanding officer (a career officer). This woman, who had been a family friend since I was a kid, came up to me one afternoon and asked quietly if she could have a McGovern button. I gave her one immediately. She made me promise I wouldn’t mention it to my father or her husband. I smiled and told her I wouldn’t.

I did ask her if she was going to vote for McGovern. Of course, she replied. I don’t want my son (who was a freshman in college) to go to war. I’ve had enough of that with my husband. She hugged me and left.

As we know, George McGovern lost that election. Richard Nixon won by a landslide. The war in Southeast Asia went on for another three years despite the faux peace treaty signed in 1973. Richard Nixon and his administration continued to develop a police state apparatus that has only been improved on in the decades since.

In a piece of poetic justice, that very same administration crumbled by 1974 because of its criminality, corruption, and arrogance. In a moment that I celebrate every August, Richard Nixon resigned from the presidency to avoid going to trial. Dozens of his co-conspirators went to prison. As for the Democrats, they changed the rules once more to prevent a candidate like McGovern from ever gaining the party’s nomination again.

The news of Mr. McGovern’s declining health made me ask a question I hadn’t asked since the day after Nixon was re-elected in 1972. What would have happened if George McGovern had won?