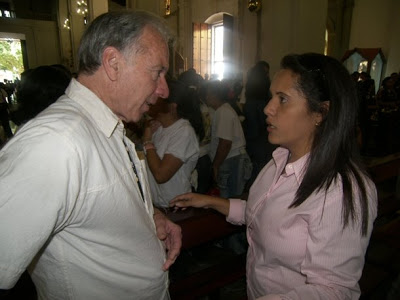 On the day of our interview, Rosa drove alone to the main police station where we were to meet. She was only 90 minutes late. Here are highlights of the interview I taped.

Rosa León’s hope is to utilize more and more of the municipal budget for funding the needs of the people as they see fit. She launched the community councils and there are now 110 of them, although many do not function in reality. While the national government is responsible for building and maintaining the nation’s roadways each municipality has or can have some of its funds to repair city streets. Rosa said her administration had repaired three streets, a total of 7 kilometers. She’d started construction of potable water wells and repairs of others. Progress had been made in the sewage system albeit my ubiquitous, sensitive nose could not confirm that. There were housing projects underway, albeit she could not count more than four houses completed. She was still trying to get weapons for the majority of municipal police; her plan for integrating the three separate policing entities in the municipal area was nearing accomplishment. She believed that 32% of the 63 million Bolivar budget [2.15 Bolivars-BF to $1 at official rate] is dispersed to decentralized entities for social projects, plus one million BF to supplement the national government funds for educational and health missions, operating apart from government entities.

“I don’t have all the figures and projects with me. But you can get the budget from our office,” Rosa told me. “You have to realize that there is a great deal of opposition pressure and even sabotage against our efforts. This state government does not help the Chavez national government or my municipality. Part of our budget, at least four million Bolivars designated for local needs such as potholes, is controlled by the state government, and it has not released these funds to us. Furthermore, some of our budget must go to pay off the large debt [12 million BF] acquired by the previous corrupt mayor, Luis Blanco. He is a friend of Aragua’s governor Didalco Bolivar.

“My first year in government was spent evaluating the structures and learning the people’s needs. Then we began to allocate funds to barrio organizations. For example, we made paths in the hills where people live so that the old, pregnant and handicapped could walk out to the nearby markets and bus stops. We provided some paint for houses and walls. In 2006, social control of some projects began as the community councils took root.

Garbage collection is a major problem not only here but across the nation. The private companies weren’t doing a good job and were extremely costly so I didn’t renew the contracts and let the workers take over the recollection. The problem is they lack the trucks and other necessary equipment. The private companies took everything. We invested 4.5 million BF [7% of the budget] in recollection, in 2007. Almost no one pays tax for garbage collection. Our workers strive to do better but they need more equipment.”

Rosa explained that she had taken a two month leave of office at the end of 2007. She was under attack for fiscal inefficiency. She declared a financial emergency and went off to the state capital, Maracay, to fortify the community council network. Her lawyer cousin took over her mayoral tasks during that time.

“One of our greatest problems is internal,” Rosa confessed during our interview. “We have a tendency to be too casual in our statements and commitments. There is much fugaz [capriciousness]. We start things and don’t finish them; too much Corre Corre [haste and lack of follow through.] I had to go into debt and we’ve been paying it back since January 2008 when I returned to office.”

I mentioned that it would have been a good idea to plan replacement of equipment before ending the private garbage collection company contract. And what about an educational campaign to raise citizens’ consciousness about waste and trash? I recounted how I watch garbage workers come to pick up trash with bear hands—they don’t have gloves or masks—and right before their eyes people drop on the ground everything from cigarette butts and empty packets to food wrappings and empty bottles. Most people wrap their household trash in plastic bags and place them outside, seemly oblivious to the fact that dogs running rampant rip them up for whatever goodies there are inside. There are almost no trash cans. The streets and parks are constantly flooded with wastes. I also noted that the commercial media is 100% anti-Rosa and anti-Chavez and while they all find fault with garbage recollection, among everything else real and unreal, they do nothing to educate people to do their part. Why doesn’t the municipal government, and the political parties backing it, have any media?

“It is an error on my part, to some degree, not to have any media backing,” Rosa affirmed. “We do have some indirect access to two local alternative radio stations but some of the opposition has partial control too. All three local dailies are owned by capitalists and oppositionists. We have allocated a bit of money to creating a local radio station but its start has been delayed. The voceros should soon have a newsletter. And we have just hired a public relations man,” Rosa concluded.

In fact, it is about the same for commercial media on the national level. Of all the newspapers, radio and television stations the pro-Chavez parties and the government itself only control 20%. Practically all newspapers are capitalist owned and are nearly all pro-imperialist. The government only has one national radio station and four television stations. The greatest media asset is Telesur, a regional network begun by the Chavez government. I watch it regularly (also in Denmark) and find it to be professional and credible while delivering pro-socialist, pro-Chavez government plans. There is variety in programming, deep-probing interviews and documentaries, serious entertainment and films. Moreover, the national government has launched 500 community media initiatives in audiovisuals, press and radio stations.

The national opposition and the international mass media spread false propaganda that Chavez is thwarting media democracy. They most often cite the fact that the government refused to renew RCTV’s public license to broadcast, but they do not report the government’s documented reasons: RCTV regularly refused to devote the legally designated time for public service news, and had openly applauded the illegal, armed coup and did not even broadcast the national massive protests which brought him back to power. In fact, RCTV, which is the only medium to be denied public service broadcasting, still broadcasts over cable, which anyone can link up. I often watched it. One of its series concentrated on the poor quality of hospital care. A camera crew filmed inside some of the hospitals, showing real defects and deficiencies, such as: open sewage, dysfunctional medical equipment, broken beds, decaying walls, lack of medicines and low salaries for workers. One program showed sanitary workers complaining to the RCTV crew about these conditions and when hospital security personnel attempted to oust the crew, the medical personnel prevented them from doing so.

From what I have seen, heard and read about the media in the two dozen countries where I have lived and or worked as a journalist over the last four decades, Venezuelans experience the most comprehensive freedom of press extant in the world today.

Shortly after our interview, Rosa, who is studying Social Communication in her spare time, discussed with me the possibility of my assisting her administration and community councils with my journalistic skills. I might conduct radio interviews and lectures, help with the upcoming newsletter and the like. In fact, I did begin a bit before Rosa cut ties with me. I gave a journalistic lecture to the Mission Sucre Social Communication classes conducted at the local university. The 40 students ranged from teenagers to grandparents. They were attentive and inquisitive. They not only asked pertinent questions they also engaged me in debate and challenged some of my views.

Soon thereafter I went to Caracas hoping to interest the pro-Chavez media in the Danish court case concerning seven Danish activists who support FARC and the PFLP in their liberation efforts.

In November 2007, a three-judge Copenhagen court found the activists, “Fighter and Lovers”, innocent of the Justice Ministry’s charge that they had materially supported “terror groups” FARC (Revolutionary Armed Forces of Colombia) and PFLP (Popular Front for the Liberation of Palestine).

The seven solidarity activists had produced and sold t-shirts with FARC and PFLP emblems in an effort to raise a debate about Denmark’s terror law, which is shaped after USA’s Patriotic Act and EU’s terror list where FARC and PFLP appear. The lists are drawn behind closed doors by anonymous politicians whose criteria for selection are secret and the accused are denied rebuttal. Being on the list is therefore not juridical.

Among defense witnesses were the Venezuelan historian Amilcar Figueroa, alternative president of the Latin American Parliament (LAP), and Niels Lindvig, a Danish radio reporter with 25 years experience in covering Colombia and Latin America. They presented facts about President Alvaro Uribe’s ties to drug cartels and mercenaries. The defense referred to a 1991 US Defense Intelligence Agency report, which stated that Uribe collaborated with narcotic cartels (Pablo Escobar) when he was governor of Antioquia.

The court concluded that FARC and PFLP were not engaged in “terrorizing the population,” as is required in Danish law, paragraph 114, in order to be classified as terrorist. But the Danish government, which openly embraces Uribe and Bush, would not accept this decision and appealed the matter. (On September 18, 2008, the Eastern Lands Court voted 5 to 1 to overturn the lower decision that FARC and PFLP are not terrorist groups. Thus, it concluded six of the seven activists are guilty of supporting terror, and they were handed a sentence of from 60 days–suspended–to six months in prison for two of them. The defense is appealing to the Supreme Court.)

Chavez had gained wide acclaim for his humanitarian efforts to negotiate the release of civilian prisoners held by FARC in Colombia. He maintained the same position as “Fighters and Lovers”: that FARC is a legitimate liberation movement representing a majority of Colombia’s peasants in armed uproar for decades against a brutal oligarchy whose governments oppress them. I hoped that if he knew of the Danish court decision Chavez could use that to help sway some who oppose FARC for being terrorists. I was interviewed by the national daily VEA, a few local radio and TV stations and the national VIVE TV station, which reflects grass roots organizations. The interview most viewed was VTV’s “contra golpe” (counterpunch) program with Vanessa Davis. She was later elected on the 15-person leadership council of the new political party PSUV (United Socialist Party of Venezuela), into which 5.7 million of the population of 27 million had registered.

Vanessa Davis went straight to the theme of FARC—was it terrorist or not—and then to EXXON, which was trying to strangle Venezuela’s nationalization of its oil and gas. She gave no time to why I was here or where I lived, which would have allowed me to put in a plug for the La Victoria government of Rosa León. It would have been natural to do so but it was not priority. When I got back to La Victoria I was to meet with Rosa to solidify my role with her administration, but she gave me the cold shoulder for having failed to mention her on TV.