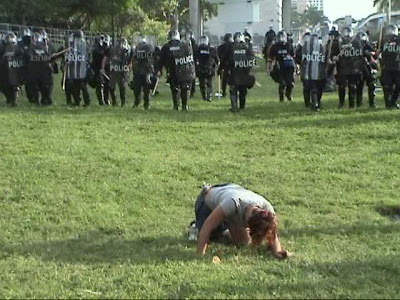 “Can’t we just all go out and say things are OK?” — President Bush, to congressional leaders during bailout negotiations

I’m not much of an Army Times reader, but after reading that a brigade was shipping from Iraq in October to serve as “an on-call federal response force for natural or manmade emergencies and disasters, including terrorist attacks” in the homeland right before the election, my antennae perked up. Same as they did when I read that an electoral college doomsday scenario exists in which Dick Cheney casts the deciding vote that gives McCain-Palin the White House.

That is, if Cheney and Bush don’t take it for themselves. That may sound like fantasy, but don’t kill the messenger. They are all strands of the Gordian knot the Bush administration has tied around the neck of the American people for the last two presidential terms, best represented today by the failed bailout of banks, brokers and other complicit parties that have since jacked the American people out of trillions. And while the Army Times revelation or election doomsday may turn out to be paranoia rather than prescience, the evidence just isn’t there.

They’ve come in handy as bullshit detectors since Bush stole the election from a flat-footed Al Gore and set about engineering the greatest transfer of public wealth into private hands in American history. If you factor in Monday’s failed takeover, as well as the $5 trillion the American people now owe thanks to the “bailout” of Fannie Mae and Freddie Mac, not to mention the continuing hyper-expensive occupation of Iraq and so on, our citizenry is now so far in the hole that it’s pointless griping about numbers. If you want one, use the figure put forth by Dennis Kucinich: half a quadrillion dollars. We have evolved past the point of economic or geopolitical reality and entered a phase of pure concept.

And all vectors of that phase point toward the conclusion that the proverbial shit has totally hit the fan — head on, and all over again.

“Franklin Roosevelt had to save capitalism from itself,” Los Angeles Times business editor Tom Petruno told me as Washington Mutual and Wachovia became the latest banking dominoes to fall. “Is history repeating?”

Indeed, it is, as one could tell from the repetitive usage of loaded terms and phrases like “Great Depression,” “meltdown,” “apocalypse,” “Armageddon” and more to describe the just-on-time cratering of the American economy. After the strange bedfellows in both parties torpedoed Bush, Bernanke and Paulson’s so-called bailout, more than $1 trillion of market value in American equities disappeared in a single day. The Dow Jones average set a record for quickest suicide dive in a single day. Other indexes sunk to multiyear lows, wiping out years of value, and stocks across the board went negative like Ann Coulter. In fact, the only major stock that actually advanced on Monday was Campbell Soup.

Can there be a more fitting metaphor for the American economy stuck beneath the Bush administration’s thumb?

But the reruns, and their loaded terminology, are merging: Bush himself is just another iteration of the infamous “New World Order” instituted by his father while trying to, what else, convince the American public that it needed to go to war against Saddam Hussein. The revisionism is transparent, befitting a government that cares nothing of what its people actually think. Jon Stewart of “The Daily Show” recently juxtaposed Bush’s address on the financial cataclysm with his pre-invasion speech in 2003 and found — surprise! — they were exactly the same.

This is a long way of saying that this particularly frightening crux of historical geopolitics, fascism and environmental calamity has been a long time coming. Failing banks? Deregulation. Endless war? Homeland security. Total information awareness? Transparent government. Bankrupt economy? The fundamentals are strong.

“Here’s my question,” Petruno adds. “If this is remembered as Black September, will that end up being too gentle a reference to what actually happened to the American financial system this month? It is beyond comprehension for people who have been on Wall Street their entire lives. I can only imagine how absolutely stunned the American public must be. Stunned, and very afraid.”

It should be. From a military brigade armed for action in the homeland in blatant transgression of Posse Comitatus to what ex-hedge funder and financial personality Jim Cramer recently called “financial terrorism,” the United States is pushing forward back.

To start with, the bailout was obvious theft, but our situation is more precarious than you think. The hyperreal credit default swap market, which few understand although it is estimated to involve tens if not hundreds of global trillions, is faltering under the weight of its own Ponzi origins. The scenario significantly worsens once you factor in the given that countries like China and others who have denominated their loans in dollars are shouldering our exploding debt, along with oil-soaked sovereign wealth funds from nations whose civil liberties records suck ass. As I wrote last year on this clusterfuck, if the Chinese call in our debts and oil-producing countries decide to peg their petrodollars to the euro, you can more or less kiss the dollar goodbye. Which means the last thing you’ll need to worry about is your stocks, retirement or credit cards. You will instead worry whether or not the cash you have on hand will be worth anything at all. That is the loaded gun that bankers, brokers and the White House is holding to the public’s head, as I write. That trillion erased on Monday, as well as the trillions that have been lost and will be lost in the coming months, was nothing more than a hostage situation engineered by the Bush administration, the Federal Reserve and their partners in crime in finance, insurance and real estate business.

They don’t call that sector FIRE for nothing. Fire destroys everything and leaves little in its catastrophic wake. Which raises the question: What’s left to burn?

“I think our economic situation can get much worse,” argues Danny Schechter, the veteran producer and author whose 2006 indie documentary “In Debt We Trust” covered this volatile territory long before CNN would. “Jobless claims are already at a seven-year high, but the government is worried about the reaction from Asia. We are living on other countries’ money, and when that spigot gets cut off, we will be in deeper doo-doo. Part of the reason for the scale of the bailout is to show Asia and sovereign wealth funds that we will protect their interests.”

But for how long? The Bush administration and Congress’ disdain for the American people has been painfully obvious, so it’s hard to believe they will call from sky-high Dubai to see how we are doing after making off with almost all of our money.

“It’s a high-stakes gamble, which is why Paulson tried to do it quickly in a climate of shock and crisis,” Shechter says. “He knew that the longer it takes, the more opposition it will attract. This plan, if eventually passed, will pre-empt the next president from doing anything about it, because there will be no money. They are wrecking the government by wrecking the economy first.”

That shock doctrine, as Naomi Klein explained in her brilliant book of the same name, has foisted this same kind of disaster capitalism on country after country over the last century. Klein’s book is littered with democracies that slept their way through coups and takeovers, entranced by one simulation or another. The United States was plugged into a matrix that onetime White House press secretary Ari Fleischer described as “an American way of life,” adding without deceit that “it should be the goal of policy makers to protect the American way of life.”

By destroying it? Mission accomplished.

“This is the September of surprise,” Schechter concluded, “not a war on Iran but on America.”

So, what’s the next step for the shoe yet to drop? Perhaps the Army Times has the clues:

(The brigade) may be called upon to help with civil unrest and crowd control or to deal with potentially horrific scenarios such as massive poisoning and chaos in response to a chemical, biological, radiological, nuclear or high-yield explosive, or CBRNE, attack. … The 1st BCT’s soldiers also will learn how to use “the first ever nonlethal package that the Army has fielded,” 1st BCT commander Col. Roger Cloutier said, referring to crowd and traffic control equipment and nonlethal weapons designed to subdue unruly or dangerous individuals without killing them.

Like every move the Bush administration has ever made, from the Patriot Act to the occupation of Iraq and down to bankrupting the American economy, this maneuver is a solution in search of a problem that it seems destined to create. Look around you. Housing is over. Stocks are nosediving. The banks are gone. War is ceaseless. Civil liberties are disappearing. Nerds at the Federal Reserve and the Treasury are taking hostages. It is madness.

And mad people have a tendency to infect everyone around them. The difference is that when you go mad … well, that’s the question mark: What will happen?

Ask the late Iman Morales, who went crazy in Brooklyn on a ledge 10 feet above ground and was illegally tasered by New York police officers, eventually falling to his death, immobilized. A perfect metaphor for our economy, sure, but it’s also the type of literal shock we might be awaiting, as the November election creeps nearer and shit begins to hit the fan with ferocity. Many of us so-called alternative journos are not conspiracy nuts, but realists. We look at galvanizing leaders like Barack Obama, America’s next president, and compare his impact to that of Lincoln, Kennedy or King — without forgetting that all three were eventually assassinated. We are the type of realists who live through two Bush presidents, both of whom configured a New World Order, with and without the approval of the American people and the world at large. The type of realists that notice that after 9/11, we couldn’t fly to Vegas, but Osama bin Laden’s family was flown out of the country on government charter.

And here is what we see today: Crowds protesting in the streets, the people’s money wiped out thanks to the Bush administration’s latest economic shock and awe. An army brigade matter-of-factly betraying Posse Comitatus for the purpose of crowd control. The public trust and wealth almost robbed cleanly with congressional approval.

In other words, we see another unfolding coup, which is to say, a rerun. And there is no telling what the future may hold, or whether or not we are connecting vectors that should remain solitary. But our math has worked just fine in the past — better than Ben Bernanke and Henry Paulson’s math, that’s for sure.

And we’d love to be wrong about what’s coming. But unfortunately that isn’t up to us, and it never has been: It’s up to the Bush administration. And it has never failed to let us down.

Scott Thill runs the online mag Morphizm.com. His writing has appeared on Salon, XLR8R, All Music Guide, Wired and others.

1 Response to Meet the New Rome, Same as the Old Rome