Rudi Dutschke Strasse : From Our Man in Berlin 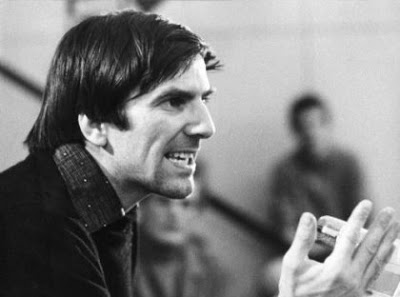 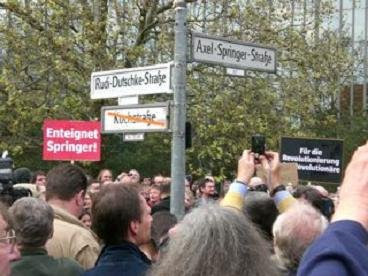 [David MacBryde was an Austin activist and a contributor to The Rag Blog’s historical precursor, The Rag., an icon of the 60s-70s underground press. He now lives in Berlin and will be posting to The Rag Blog from time to time.]

An enjoyable sign of the times in Berlin, Germany.

There was a street party on April 30, to celebrate the renaming of a local street Rudi Dutschke Strasse.

It was an historical day in town, marking both success in honoring Rudi and also demonstrating historical paradigm changes in the society here.

Forty years ago Gretchen and Rudi Dutschke were very active in the local German “SDS” — by happenstance the same initials as the Students for a Democratic Society in the United States — and at about the same time — though there were some differences. One similarity: German SDS was, like its U.S. counterpart, a particularly visible if numerically small part of a much larger movement.

Rudi was very active and was (or was picked upon as) a media figure. The Axel Springer press (with eight per cent market coverage in Berlin at the time) picked Rudi as the object of hate – as a media icon to focus hate against the “tiny minority” of “student revolutionaries.”

In 1968 Rudi was shot in the head in an attempted assassination, and was badly wounded. In 1968, outraged at the shooting, thousands of Berliners went to the Axel Springer publishing house to blockade it, blaming the publisher for creating a climate of hate against Rudi.

(Rudi recovered to a great extent, went on to help with the creation of the German Greens, and died, may he rest in peace, on Christmas Eve, 1979, in his bathtub, of an epilepsy fit resulting from his wounds.)

Now naming a street in his honor demonstrates a change in thinking here about Rudi, and much more. Back then “conservatives” and particularly the Axel Springer press tried to fan fear and hate, and focused on Rudi. Now there are still some conservatives who try to blame “the 60’s-‘70s” (here usually referred to iconically as the “1968ers”) for all modern evils. The current pope, at least before he became pope, was among those blaming the 1968ers for the collapse of morality and other evils.

But this year, 2008, 40 years after “68”, a huge kaleidoscope of photo exhibits, film series, discussions and events in Berlin have revisited “68” – at places like the Academy of Art, and, my favorite, actually inside the building of the America Haus, with an old water cannon parked in front, showing the protests back then outside the America Haus. Keep your eyes on The Rag Blog for more on this in the future. 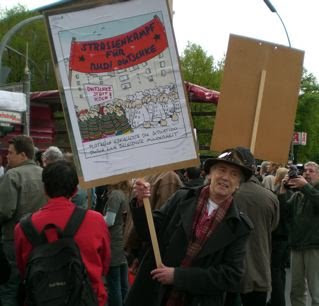 Our correspondent, with sign, at street party.
Rag fans and Ragblog aficionados may enjoy the fact that it was Die Tageszeitung (literally “the daily paper,” affectionately known as the TAZ) that initiated the name change. Whereas The Rag was published in Austin, Texas from 1966 to 1977, the TAZ was, after a number of attempts, finally founded in 1979 to create an alternative presence in the then miserable media landscape. The TAZ is now a major national daily paper. Their building (see the video clip) is named the Rudi Dutschke Haus, and is now on the Rudi Dutschke Strasse, formerly Koch Strasse, which was historically the newspaper street in Berlin, like Fleet Street in London. The new Rudi Dutschke Strasse intersects the Axel Springer Strasse — a nice historical touch, with the Rudi Dutschke Strasse having the right of way.

A number of conservatives and the current Axel Springer company intensely tried all sorts of things to block the name change. But the local borough council is strongly red-green-red (with the local “conservative” party stuck at about 20 per cent of the vote), and voted heavily in favor of the change. A petition drive against the change failed. The courts threw out challenges and an
appeal.

As was noted at the street party celebration, although the Axel Springer building is now a bit larger now, their influence is much, much smaller. They lost their attempt to block the
change — the change of the street name, and of the opinions of people in town. This is a sea change in Berlin that has taken a while.

{One current note from Berlin to those of you in Austin: the photo exhibits here about local history were helpful. In Austin, Alan Pogue (now a contributor to The Rag Blog) took many pictures indeed, and provided considerable glee and memory glue for the Rag Reunion.. As one particular proactive project I would like to help work towards creating The Alan Pogue Picture Archive, somehow, for a bunch of reasons including some fun. Contact me via http://sdswiki.pbwiki.com/ if also interested.}

This entry was posted in Rag Bloggers and tagged David MacBryde, Europe, Sixties, The Left. Bookmark the permalink.