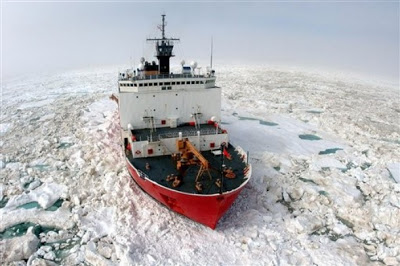 US Coast Guard Cutter Healy will embark on Arctic Voyage this week to determine the extent of the continental shelf in Alaska and to map the ocean floor, data that could be used for oil and natural gas exploration. Photo by Prentice Danner / AP.
‘It’s a scramble for the spoils of global warming’
By Zachary Colie / August 12, 2008

It’s a scramble for the spoils of global warming as the rapid melting of Arctic sea ice is opening access to previously unreachable deposits of oil and gas, setting off a race by northern nations – including the United States, Canada and Russia – to claim them.

The pursuit of those resources will be underscored this week as the U.S. Coast Guard cutter Healy sails north from Barrow, Alaska, on Thursday to map the sea floor of the Chukchi Cap, an area at the northern edge of the Beaufort Sea. The maps could bolster U.S. claims to the area as part of its extended outer continental shelf.

The U.S. Geological Survey confirmed last month what the oil industry had long suspected when the agency released an estimate that the area north of the Arctic Circle may hold as much as 90 billion barrels of oil and 1,669 trillion cubic feet of natural gas, or roughly 13 percent of the world’s total undiscovered oil and 30 percent of the undiscovered natural gas.

The dash to stake out territory across the Arctic has accelerated since Russia sent one of its submarines last August to plant the country’s flag on the sea floor beneath the North Pole, provoking an outcry by other nations that viewed it as an unauthorized land grab.

Earlier this month, Canadian officials at a geology conference in Norway detailed their territorial claims to the Lomonosov Ridge, an underseas mountain range that runs beneath the North Pole. Canada argues that the ridge is part of the North American continent, not part of Siberia, as Russia has asserted.

The Danish government joined in backing Canada’s argument, even though those two nations have also clashed over claims in the Arctic. Why? Because Denmark, which controls Greenland, believes Canada’s assertion could boost its own contention that part of the energy-rich ridge should be Danish territory.

These northern powers are all rushing to complete assessments of how far their underseas territory may extend. Under international law, countries control all natural resources within the “exclusive economic zone,” which extends 200 nautical miles offshore. But if a country’s continental shelf extends far into the ocean, the nation can claim underseas land up to 350 miles offshore under the U.N. Convention on the Law of the Sea.

The United States has signed the Law of the Sea Treaty, but the Senate has not ratified it. Margaret Hayes, who directs the State Department’s Office of Oceanic Affairs, said on a conference call Monday that while the United States moves toward ratifying the treaty, it must gather all the scientific data it will need to justify its territorial claims.

During the Healy’s three-week voyage, scientists from National Oceanic and Atmospheric Administration and University of New Hampshire will use a device called an echo sounder to create a three-dimensional map of the sea floor. The Healy will make a second voyage, from Sept. 6 to Oct. 1, carving a path through the ice, while a Canadian ship, the Louis S. St. Laurent, follows, gathering seismic data about the thickness of the sediments along the sea floor.

While it’s a scientific mission, USGS scientist Deborah Hutchison acknowledged that oil companies will be eager to see the results, which could yield major clues about the size and location of oil and gas deposits.

“The cruises are not intended to look for energy resources. … That is not a primary or even a secondary objective,” Hutchison said. “However, it’s inevitable because there are so few data in this area (of the Arctic), there will be great interest in using this data” to assess the potential for drilling.

Alaskan officials, who rely on oil revenue and face declining oil fields along the North Slope, see more Arctic drilling as a way to keep the state’s oil economy afloat. While the Atlantic and Pacific coasts have been off-limits to drilling under a federal ban for nearly three decades, the Interior Department is already leasing areas of the Beaufort Sea and Chukchi Sea.

Environmentalists warn of the perils of oil exploration in the region. Critics say that conditions in the Arctic – shortage of natural light in winter, extreme cold, moving ice floes and high winds – make it extremely difficult to respond to an oil spill.

“Ultimately what is going to be needed is a more comprehensive ecological study of that region and some indication as to whether or not any technology that we have today is likely to be able to clean up spilled oil in that set of conditions,” said Richard Charter, a coastal advocate for Defenders of Wildlife Action Fund.

The voyage of the Healy this week is being made possible by the swift melting of the sea ice. Last year, Arctic sea ice retreated at a record-setting pace.

The Inupiat residents of Barrow were stunned last fall when a cruise ship and 400 Germans showed up in their town. They had arrived from Europe via the Northwest Passage over Canada, which for the first time in recorded history was ice-free.

Larry Mayer, an oceanographer at the University of New Hampshire who helped lead a similar Arctic trip last summer, said he was shocked at how easily the team could navigate through the region. He noted the irony that the rapid melting “was bad for the Arctic, but very, very good for mapping.”

Thanks to CommonDreams The Rag Blog

1 Response to Rush to Arctic As Warming Opens Oil Deposits