San Francisco’s Castro District : How Does Your Garden Grow? 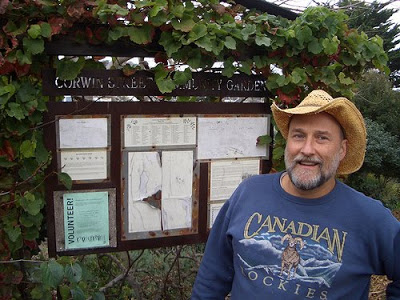 Bill Murphy oversees the care and maintenance of Corwin Street Community Garden in San Francisco’s Castro District. Photo from Hedonia.
Tending our garden:
The politics of planting (and sharing):

The following article by San Francisco blogger Sean Timberlake is, in part, about my longtime friend Bill Murphy, who can express rage as well as anyone I know about imperialism, militarism, the exploitation of workers, homophobia, and any other form of injustice.

While this article is not about any of those issues, it is, to me, a highly political article, and my desire to share it with you is equally political.

This act of sharing (with the understanding and support of Rag Blog editor Thorne Dreyer, with whom I worked at Liberation News Service in the 1960s) reflects an often forgotten value — that of appreciating our friends and expressing pride in their accomplishments.

Bill Murphy’s work as volunteer coordinator of a community garden, and the blogger’s depiction of his own appreciation of this garden, is the focus of the article. The politics, as I see it, involves shedding positive light on concepts such as cooperation, manual labor, community, neighborhood activism, local history, government support for local initiatives, aesthetics, resource protection, sustainability, environmental awareness, land protection and stewardship, and more.

The writer weaves all of this together in a simple description of a community garden, telling a story that was personally heartwarming to me because of my friendship with Bill (whose picture you can see here on The Rag Blog), but which other readers should also be able to enjoy. 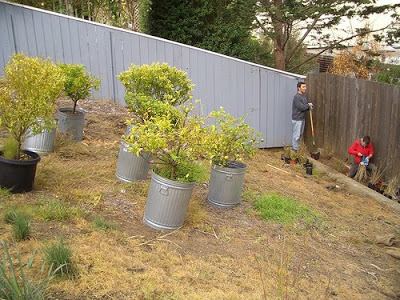 SAN FRANCISCO — Sometimes, you just have to get your hands dirty.

For me, that mostly means finding strata of food under my nails after a sweaty day in the kitchen. But on a chilly morning in December, my hands got dirty with real, actual, honest-to-god dirt. As in, from the earth.

Me and dirt are like oil and water. Gardening is not something I have an innate passion for, but there is one garden I have a soft spot for. Tucked between modern apartment buildings on a dead-end street on the slopes of Eureka Valley in San Francisco, the Corwin Street Community Garden is more than a patch of pretty flowers.

As a tour guide in the neighborhood, I often drag my more ambitious groups up the steep incline to the garden and to the Seward Mini-park below. Here, deep in the residential tracts and close to the geographic heart of the city, they offer surprising morsels of our city’s history.

The garden and park combined fill a narrow strip of land that spans between Corwin and Seward Streets. After a house that occupied the Seward Street plot fell off its foundation and slid into the street below in the 1950s, the land lay vacant for nearly a decade. Plans were laid for a 105-unit apartment building to be erected on the land, spurring neighbors to take the issue of preserving open space up with City Hall. Years of hearings ensued.

In 1966, on the day the contractors arrived to begin construction, the neighbors staged a sit-in, and the developers backed down. Ultimately, these actions led to legislation that set standards for a minimum amount of open space in the city.

For the lower portion of the plot, a contest was held to design a “mini-park” in 1973. The winning design, by 14-year-old Kim Clark, featured a pair of curved concrete slides. These slides never fail to bring out the inner child in everyone. I’ve had walkers of all ages toboggan down on flattened cardboard boxes. If the slides are dry enough, and you recline as if in a luge, you can even catch some air on the way down. It’s exhilarating. 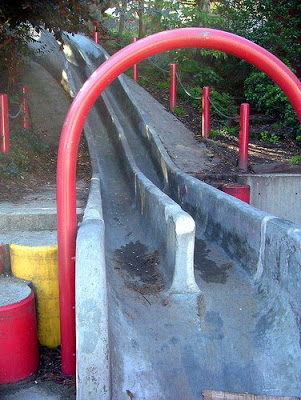 Seward Street Slide. Photo from dogwelder / Flickr.
The park also features a bas relief by local artist Ruth Asawa, whose work can be seen in the lower level of the observation tower at the de Young Museum.

Despite the modern buildings on all sides, pieces of San Francisco’s deeper history lay all around. According to a local neighbor, just steps away on Seward Street, marble steps connecting the walkway and the street are in fact blocks from the original city hall, destroyed in the 1906 earthquake. There’s an adjacent retaining wall of red bricks salvaged from former mayor “Sunny” Jim Rolph’s house.

Acme Alley, the cobblestone passage that runs uphill alongside the park, is a vestige of the cow paths forged from the area’s days as pastureland in the 1800s. At the top, where it intersects Corwin Street, is the garden.

San Francisco has a rich tradition of community gardens, which by and large offer grave-sized plots of land for locals to indulge their gardening habits in an otherwise urban environment. The Corwin Street garden is different. Here, the “habitat garden” is dedicated to showcasing indigenous and drought-tolerant plants, installed in such a way as to be sustainable with San Francisco’s existing rain patterns, and to avoid the use of chemical fertilizers or pesticides.

Unlike other community gardens, the Corwin garden requires a more singularly coordinated effort to maintain. Bill Murphy, pictured above, oversees the care and maintenance of the garden. Once yearly, on the first Saturday of December, he organizes a work day to bring the garden back into shape.

Having schlepped perhaps hundreds of strangers by and through the garden, this was my opportunity to give back, at least a little. As part of a work force of some 30 volunteers, I helped plant iris and artemisia, lay mulch and remove rotten logs to make way for new walkway borders.

This year marked a sea change to the garden. The habitat garden would now be supplemented by an “urban orchard” of citrus trees. Future plans include a fence of fruit trees and berries, and raised beds of herb gardens. The orchard should be complete within the year, and Bill is working out a plan to distribute the product of the garden to contributors and community members.

I’ve often enjoyed the garden as a place of reflection and nourishment for the soul. On balmy spring days, it’s a delight to see the butterflies and hummingbirds flit through to feed on the bounty of blossoms. It enthralls me to think that the garden will now become a source of more literal sustenance for the community.

I can’t help but wonder: What if we were to treat more of our open spaces in cities this way? What if neighbors came together more often to nurture their communities? What if the fruits of their labors could feed the hungry in their own back yards? How can we better tend our gardens?

1 Response to San Francisco’s Castro District : How Does Your Garden Grow?