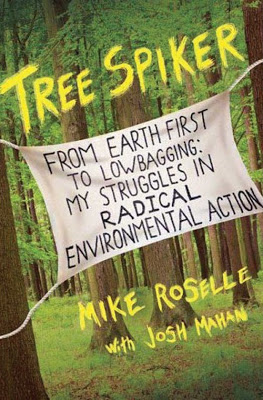 [Tree Spiker: From Earth First! to Lowbagging: My Struggles in Radical Environmental Action by Mike Roselle. Published by St. Martin’s Press, Sept. 29, 2009; hardcover; 272 pp. Born Under a Bad Sky: Notes from the Dark Side of the Earth by Jeffrey St. Clair. Published by CounterPunch/AK Press, Dec. 1, 2007; trade paperback, 460 pp.]

On rare and welcome occasion we meet uncompromised green activists and writers completely focused on winning, and utterly void of bullshit.

Two such specimens are Mike Roselle and Jeffrey St. Clair. Not surprisingly, their recent books are pleasures to behold.

My long-time Greenpeace co-conspirator, Roselle is a “legend in his own crime” who exceeds his advance billing and then some. His Tree Spiker (St. Martin’s Press) tells of a hard-scrabble Louisville childhood well-suited to the gritty green activism required to save forests and stop nukes. From a race along the edge of juvenile delinquency to some of the funniest jail tales you’ll ever read, Roselle constantly amuses and inspires.

From the wrong side of the logging camps to the tops of tripods meant to save those very trees, Roselle sings a song of guts and glory without pomp or guile. Like all good organizers, Mike knows Rule One is “never be boring.” Then there’s the one about knowing you can win — and doing it.

Tree Spiker is a quick, riveting read with all the self-effacing warmth and humor one would expect from a guy who co-founded Earth First! and felt honored by being thrown out of it.

With co-writer Josh Mahan he welcomes you into the world of a pretty big dude known to share (many) beers with various nefarious roughnecks and ideologues while totally outsmarting them all when it comes time to cut the crap and win the victory.

Push really comes to shove at one point when Roselle confronts the vanguard of the Earth First! organization he helped form to establish a Cove/Mallard Coalition aimed at saving some of the most pristine and least known forest stands in the lower 48. “No matter how much we advocated stopping the road” that would kill the region, he complained, “no one would arrest us.”

Camped with little cover or support in the violent wilds of right wing Idaho, Roselle and his hardy cohorts hang on for dear life — the forest’s, and their own. Against all odds, as months of brutal campaigning turn to years, “the chain saws and bulldozers have been silenced in Cove/Mallard, and you can once again hear the howl of a wolf float through the stillness of the night.”

Typically, for Roselle, the lessons of the Cove/Mallard campaign were “opposite of what one might think.” In this remote Idaho backwater, “we weren’t even allowed into local stores or restaurants. Media coverage, with the exception of the alternative press, was universally negative. No foundation would give us funding. No self-respecting environmental group would join our coalition. Yet through tenacity, audacity, and a strong belief that, win or lose, we were all doing the right thing, we outlasted them.”

Mike is now based in the West Virginia boonies, focused on stopping mountaintop removal. He’s the quintessential grassroots activist. When you read Tree Spiker you’ll realize that amidst the horrible devastation being wrecked on these mountains by King Coal, sooner or later, the momentum must turn toward Mother Earth.

And as soon as that happens, Mike will be inundated with requests to spearhead some other campaign, which he will undoubtedly get going, then get booted from, then rally to victory against ridiculous odds, many of them self-imposed by the circular green firing squad which loves to put the hard-core, uncompromised organizers like him in the middle.

My advice, if you still have legs and really want to help save the Earth, would be to read Tree Spiker, then track Mike down in the bar of the town where he’s organizing [roselle@lowbagger.org, Climate Ground Zero , PO Box 166, Rock Creek, West Virginia 25174; (304) 854-7372]. Stand there till he tells you all the stories you can handle. You’ll emerge with the ultimate green education. With consummate charm, Mike will then — before you know what’s happening — put you to righteous use. Together, you will win… as will we all.

Likewise the writings of Jeffrey St. Clair [sitka@comcast.net]. Raised in a rural Indiana now buried under lethal sprawl, he bemoans the fact that “my grandfather’s farm is now a shopping mall. The black soil, milled to such fine fertility by the Wisconsin glaciations, now buried under a black sea of asphalt.” 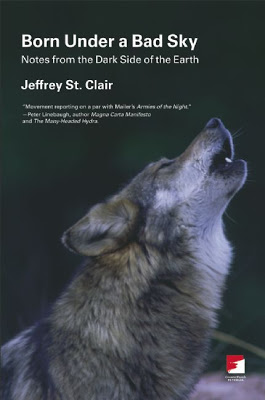 Anthologized most recently in his Born Under a Bad Sky (CounterPunch/AK Press), St. Clair writes with the incisive precision and wit of a gifted green surgeon going straight for the corporate jugular. Like Peter Mattheissen and very few others, his ability to describe nature in its virginal glory can be deeply compelling. “Destruction of the wild sparks militancy in the heart,” he writes. “Wild places communicate their own passion and power, sensations that are the antithesis of political abstractions.”

Like Roselle, St. Clair’s faith lies in the grassroots, Mother Earth’s army of last resort. “The power of the people can still overwhelm the influence of big money,” he proclaims. “Anything is possible. Find your place, take a stand. People will join you.”

An editor of the uncompromised, infamously acerbic CounterPunch website, St. Clair is at his bitter best bursting the bubbles of greenwashed hypocrites. Senator John Kerry and his fellow Democrats “never aligned themselves in opposition to the interest of the oil cartels,” he writes. “Far from it. In Clintontime, oil industry lobbyists flowed through the White House as easily as crude through the Alaskan pipeline, leaving behind campaign loot and wish lists.”

St. Clair is unique among environmental writers in the scope of what he covers. His superbly informed reportage spans the horizon from forests and water to energy and the chemical industry. He is meticulous, careful and credible. He cuts to the core with gusto and glee, especially when skewering those who most deserve it.

Among much else, St. Clair was one of the very few to grasp the complicity of “Gang Green” mainstream environmental groups in perpetrating the $100 billion scam of utility deregulation, beginning with Ralph Cavanagh of the Natural Resources Defense Council.

“Can you trust Enron?” Cavanagh asked. “On stewardship issues and public benefit issues I’ve dealt with this company for a decade, often in the most contentious circumstances, and the answer is, yes.”

Not until George W. Bush would praise those who held New Orleans’s head underwater would such hype be heaped on those who did so much harm. As St. Clair shows, NRDC Founder John Bryson, perched atop southern California’s largest utility, scammed billions from ratepayers to prop up defective nuclear plants, siphoning countless public dollars away from decentralized green energy projects while painting himself as a vanguard environmentalist.

Taken together, Roselle and St. Clair are as good as it gets for a green one-two punch. Tree Spiker Mike takes you into the boondock byroads of some of the toughest forest fights our emerging green nation has won. In his articles at CounterPunch and Born Under a Bad Sky, Jeff cuts to the core of who is bought and who is not.

Both these amazing guys have produced books that are great to read and utterly void of filler or fluff. Imbibe them each. Then go kick some corporate butt. Mother Earth will love you for it.

[Harvey Wasserman’s Solartopia! Our Green-Powered Earth is at www.harveywasserman.com , as is Passions of the Pot Smoking Patriots by “Thomas Paine.” He has been reading Jeffrey St. Clair’s articles for years, and has known Mike Roselle even longer.]