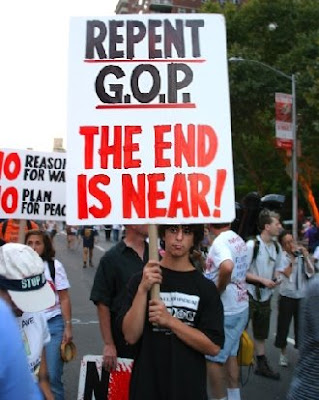 National Republican Congressional Committee officials acknowledged publicly today that they have found discrepancies in their books of more than a million dollars and evidence that the NRCC’s former treasurer, Christopher Ward, made “several hundred thousand dollars” worth of unauthorized wire transfers out of the committee that appear to have ended up in Ward’s own bank accounts.

The NRCC launched an internal probe and contacted the FBI in January after learning that Ward “apparently fabricated and submitted 2006 financial statements to the NRCC’s bank,” according to a memo issued by the committee today. Some details of the probe have been reported previously, but today’s memo and press briefing by a lawyer retained by the committee marked the fullest public accounting so far of the unfolding scandal.

The initial dollar amounts disclosed by the NRCC today suggest that this case could be the biggest campaign swindle ever recorded.

“Based on analysis conducted to date, it appears likely that over a period of several years Ward made several hundred thousand dollars in unauthorized transfers of NRCC funds to outside committees whose bank accounts he had access to, including joint fundraising committees in which the NRCC participated,” said the NRCC memo.

“He also appears to have made subsequent transfers of several hundred thousand dollars in funds from those outside committees to what appears to be his personal and business bank accounts. Those unauthorized transactions date back to at least 2004.”

The NRCC has found that the amount of cash on hand it reported to the Federal Election Commission at the end of 2006 was approximately $990,000 more than the committee actually had in the bank. The total the NRCC reported in the bank to the FEC as of Jan. 31, 2008, was $740,000 more than the actual amount, and the committee has discovered that it owes $200,000 more on its outstanding line of credit than it has reported to the FEC.

It is not clear yet to investigators whether those discrepancies are all due to money transferred out of the committee by Ward, or whether at least some of the shortfalls are attributable to other accounting errors.

“The evidence we have today indicates we have been deceived and betrayed for a number of years by a highly respected and trusted individual,” NRCC Chairman Tom Cole (Okla.) said in a statement.

Ward and his attorney have not spoken to the media since news of the NRCC investigation first broke.

While the FBI’s investigation is ongoing, the NRCC has also hired the law firm Covington & Burling to conduct an internal probe, and that firm has in turn hired PricewaterhouseCoopers to do a forensic audit of the committee’s books. NRCC officials now believe the last bona fide audit of the committee took place in 2001, and that Ward submitted “bogus audits” every year from 2002 through 2006 on faked stationary from a genuine, respected accounting firm.

Rob Kelner of Covington & Burling explained to reporters today that his firm’s initial probe revealed a “pattern in which Ward would wire transfer funds to other committees where he did accounting work and had signature authority.” The evidence further showed transfers from those committees to Ward’s bank accounts.

“The exact dollar figures are currently a moving target, and as the investigation progresses, it is entirely possible that these figures will change, either by increasing or decreasing,” the NRCC memo said.

The NRCC borrowed $8 million in 2006 from Wachovia Bank in order to fund that year’s Congressional races, and the committee was required to give the bank detailed financial information in order to secure the loan. It is illegal to knowingly submit false information to a bank for such a transaction, though Kelner said he believed the committee itself would not face any charges for its submissions to Wachovia.

“We’re not aware of any reason why the NRCC should have any [legal] exposure,” Kelner said.

In addition to the NRCC, Ward has served as treasurer for more than 80 other GOP fundraising committees, many of which are now concerned they may also have had money stolen.

Kelner pointed out that it is “not that unusual” for campaign committees to fall victim to embezzlement schemes, and several past examples can be found here.

As of now, Kelner said, this appeared to be a one-man operation. “We’re not aware of anyone colluding with [Ward] on this,” he said.

The NRCC already faces a challenging election cycle. Plagued by a rash of retirements, the GOP has far more open seats to defend in the fall than Democrats do, and the party suffered an important symbolic blow on Saturday when Democrats captured the Illinois seat of ex-Speaker Dennis Hastert (R) in a special election.

Republicans are also at a significant financial disadvantage. As of Jan. 31, the Democratic Congressional Campaign Committee had nearly $30 million more in the bank than the NRCC had.