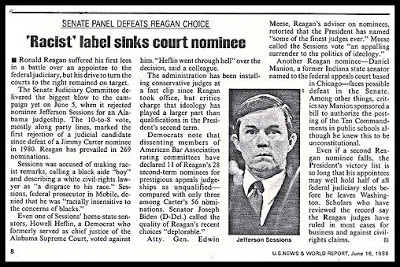 There is great irony here in the once rejected nominee [for federal judge] now trying to sharpen his claws on Judge Sotomayor. But she is lots tougher and sharper than Sessions could ever be, and is letting him claw away, as he loudly displays his lightweight duplicity and demagoguery.

The Republican Party’s finest continue to exhibit just how sorry, brazen, and unprincipled many of them can be as questioning of Supreme Court nominee, Sonia Sotomayor has gotten underway. One of the worst and most shameless of the GOP interrogators is Alabama junior senator, Jeff Sessions.

In 1986 Sessions himself sat in front of the Senate Judiciary Committee as a Reagan nominee for a federal judgeship, and was promptly rejected because of his history of racially insensitive remarks and a poor civil rights record. One of those questioning Sessions was Senator Edward Kennedy who even back in 1986 called him “a throwback to a shameful era.”

Today, after 23 years of playing the good old boy politician, becoming a U.S. Senator in 1997, Sessions, who switched from the Democratic to the Republican party, was assigned to be the Ranking Member on the Senate Judiciary Committee less than three months ago.

There is great irony here in the once rejected nominee now trying to sharpen his claws on Judge Sotomayor. But she is lots tougher and sharper than Sessions could ever be, and is letting him claw away, as he loudly displays his lightweight duplicity and demagoguery.

In his confrontational opening statement of the confirmation hearings for Sonia Sotomayor, Sessions, in his high nasal whine, he lectured the nominee about ‘prejudice’ in the legal system.

Twenty years ago when Sessions sat before the very panel he now heads, he was asked about well documented reports of his publicly recognized racism. His response, “I may have said something about the NAACP being un-American or Communist, but I meant no harm by it.”

Sessions allegedly referred to the (NAACP) and the (ACLU) as “un-American” and “Communist inspired” because they “forced civil rights down the throats of people.” At his confirmation hearings, Sessions said that the groups could be un-American when “they involve themselves in un-American positions” in foreign policy.

Sessions had been frequently accused of “gross insensitivity” on racial issues by his detractors. Among a variety of blatant racial comments his opponents pointed to, was his joking reference to the Ku Klux Klan which he said “was not so bad until he found out that some of them smoked marijuana.” Sessions, with a straight face, claimed his remarks were made in jest.

The panel didn’t buy it, and rejected him. One of those voting against him was Alabama Democratic Senator Howell Heflin.

Today Republican Senator Sessions is but one more example of GOP leadership tinged with documented hate, racism, anti immigration xenaphobia, and unrealistic conservative dreams of “keeping things like they have always been.”

The almost certain approval of Judge Sotomayor will, indeed, not be the way things have always been. That is the point of President Obama’s having nominated her to the join the ranks of what has historically been the dominion of white men only, with only recent minor exceptions.

Meanwhile Senator Sessions may well be called into other hearings since he was one of of only nine opponents of Senator John McCain’s anti-torture amendment. Sessions supports former Vice President Dick Cheney’s proposal to exempt the (CIA) from any ban on the use of torture.

Session’s is a real humanist too. Last month reportedly during testimony by a 42-year-old Filipino woman scheduled to be deported, the mother of two American children, who had been in the USA for 23 years, Sessions was clearly heard telling one one of his aides, “Enough with the histrionics,” when the woman’s 12-year-old son began crying during the testimony.

And now he lectures a Supreme Court nominee about “prejudice in the legal system.”

The only thing more disgusting and upsetting than Sessions’ troubling racist past are the voters out there who are nodding their heads in agreement with his “tough questioning.”

4 Responses to Sen. Sessions : Alabama Hypocrite Would Sit in Judgment