Shouldn’t a Global Treaty Against Guns Be Next? 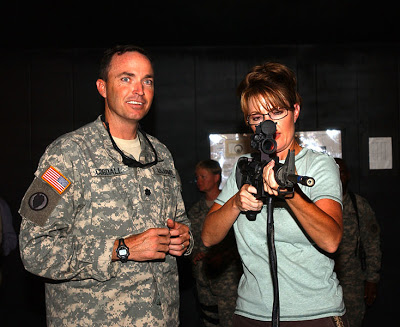 We’ve heard a lot about gun control and the second amendment in this election season. A McCain-Palin poster, featuring Alaska’s 44-year-old governor with a big gun and the viewer in her rifle sights, is just one of the more graphic indications that gun control is a lightning-rod issue that distracts, distorts, and dismays.

More than 200 years after our founding fathers enshrined the right to “bear arms” in our Constitution, we have more arms than we can bear. Wars are fought, fortunes are made, and nations rise and fall on these weapons. At the human-to-human level crimes are committed, vengeance is taken, rage is given full range, and terror is wreaked from the barrel of these weapons.

The United States is the world’s largest arms-supplying nation. In 2007, the United States entered into over $19.1 billion in Foreign Military Sales (FMS) agreements with other nations and for 2008, sales of military goods and services mushroomed to $34 billion — triple the volume of the Bush administration’s first year.

U.S. exports range from combat aircraft to Pakistan, Greece, and Chile to small arms and light weapons to the Philippines, Egypt, and Georgia. Since the beginning of the war on terror, the United States has transferred more than $88 billion in weapons and military material through the Foreign Military Sales channel. In 2006 and 2007, U.S. weapons and military training went to over 168 states and territories. But it’s not just big weapons systems transferred legally.

U.S. small arms are briskly — and illegally — sold all over the world. And we need not look further than our southern border to see the intersection of small arms trade and big military policy. The newspapers are full of stories of horrific violence between drug cartels and the Mexican military and police. The New York Times reported recently that 3,700 people have been killed in violent incidents related to the drug trade and organized crime so far this year. In the article “Killings Haunt Mexican School Children,” Times reporter Marc Lacey documents the impact drug violence is having on Mexican school children. The headmaster at a school near where 11 mutilated bodies were dumped relates that his students are asking questions like: “Why did they die?”

Since a military-led crackdown on drug traffickers began more than 18 months ago, thousands have died in drug-related violence, including police officers and soldiers, as well as cartel members, corrupt officials, and countless innocent bystanders according to Mexican authorities.

The violence is fueled in part by the high-tech, high-quality weapons bought at gun shows and shops in the United States. According to the U.S. Bureau of Alcohol, Tobacco, Firearms and Explosives, more than 90% of guns seized after shootings or police raids in Mexico or at the border can be traced back to the United States. Last year alone, 2,455 weapons traces concluded that the guns had been purchased in the United States.

Where do they come from? There are more than 6,700 licensed gun dealers across four states within a short drive of the United States’ 2,000-mile border with Mexico — three dealers for every mile of border territory. Each state has its own set of laws for gun sales. California has instituted a 30-day waiting period and banned the sale of assault rifles; neighboring Nevada and Arizona have not. The ease with which huge numbers of deadly weapons are bought and smuggled has led law-enforcement officials to dub the region an “iron river of guns.”

This is our right to bear arms in practice. And it’s not saving lives or guarding liberties. A glut in arms production and patchwork state-by-state laws regulating the sale of guns means that it’s relatively easy for narco-traffickers and criminals to get their hands on everything from assault rifles to handguns, as well as all the ammunition they need.

In the last 10 years, the international community succeeded in establishing a global treaty against antipersonnel landmines and a global ban on cluster bombs — weapons of indiscriminate effect that can leave behind thousands of unexploded “bomblets” that pose a threat to military personnel and civilians alike.

A common thread that unites these efforts is the demand that human rights and humanitarian concerns be placed front and center in decisions on what weapons are transferred, and how they are used.

In addition, each campaign has made effective arguments suggesting that beyond the humanitarian benefits of curbing these weapons, there are national security and economic benefits as well: promoting stability, removing risks to traditional armed forces and peacekeeping operations, and making the nations of the global South safe for development.

Shouldn’t a global treaty against guns be next?

Foreign Policy In Focus columnist Frida Berrigan is a senior program associate at the Arms and Security Initiative of the New America Foundation.

2 Responses to Shouldn’t a Global Treaty Against Guns Be Next?