Signs of a Sick Society, Episode XLIX: A Vote for Obama Was "Material Cooperation with Intrinsic Evil" 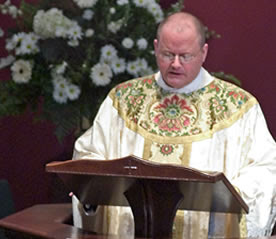 COLUMBIA, S.C. – A South Carolina Roman Catholic priest has told his parishioners that they should refrain from receiving Holy Communion if they voted for Barack Obama because the Democratic president-elect supports abortion, and supporting him “constitutes material cooperation with intrinsic evil.”

The Rev. Jay Scott Newman said in a letter distributed Sunday to parishioners at St. Mary’s Catholic Church in Greenville that they are putting their souls at risk if they take Holy Communion before doing penance for their vote.

“Our nation has chosen for its chief executive the most radical pro-abortion politician ever to serve in the United States Senate or to run for president,” Newman wrote, referring to Obama by his full name, including his middle name of Hussein.

“Voting for a pro-abortion politician when a plausible pro-life alternative exists constitutes material cooperation with intrinsic evil, and those Catholics who do so place themselves outside of the full communion of Christ’s Church and under the judgment of divine law. Persons in this condition should not receive Holy Communion until and unless they are reconciled to God in the Sacrament of Penance, lest they eat and drink their own condemnation.”

During the 2008 presidential campaign, many bishops spoke out on abortion more boldly than four years earlier, telling Catholic politicians and voters that the issue should be the most important consideration in setting policy and deciding which candidate to back. A few church leaders said parishioners risked their immortal soul by voting for candidates who support abortion rights.

But bishops differ on whether Catholic lawmakers — and voters — should refrain from receiving Communion if they diverge from church teaching on abortion. Each bishop sets policy in his own diocese. In their annual fall meeting, the nation’s Catholic bishops vowed Tuesday to forcefully confront the Obama administration over its support for abortion rights.

According to national exit polls, 54 percent of Catholics chose Obama, who is Protestant. In South Carolina, which McCain carried, voters in Greenville County — traditionally seen as among the state’s most conservative areas — went 61 percent for the Republican, and 37 percent for Obama.

Sister Mary Ann Walsh, spokeswoman for the U.S. Conference of Catholic Bishops, said she had not heard of other churches taking this position in reaction to Obama’s win. A Boston-based group that supports Catholic Democrats questioned the move, saying it was too extreme.

“Father Newman is off base,” said Steve Krueger, national director of Catholic Democrats. “He is acting beyond the authority of a parish priest to say what he did. … Unfortunately, he is doing so in a manner that will be of great cost to those parishioners who did vote for Sens. Obama and Biden. There will be a spiritual cost to them for his words.”

A man who has attended St. Mary’s for 18 years said he welcomed Newman’s message and anticipated it would inspire further discussion at the church.

“I don’t understand anyone who would call themselves a Christian, let alone a Catholic, and could vote for someone who’s a pro-abortion candidate,” said Ted Kelly, 64, who volunteers his time as lector for the church. “You’re talking about the murder of innocent beings.”

1 Response to Signs of a Sick Society, Episode XLIX: A Vote for Obama Was "Material Cooperation with Intrinsic Evil"