And given my firm belief that the worst, by far, is yet to come, our generous and kind society should become really thoroughly fucked up in the coming days. It is clear that our government is generously responsible for a lot of these sorts of results, given the amount of fear-mongering that has taken place since September 11, 2001. Everyone participating in this selfish nonsense should be ashamed. 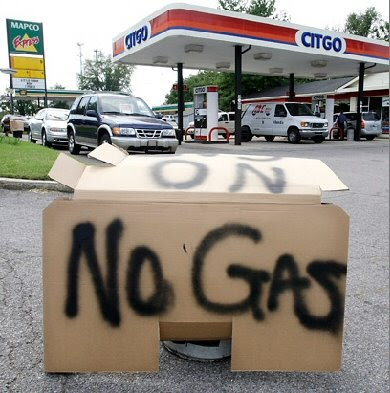 Call it a self-fulfilling prophecy: An estimated three-fourths of gas stations in the Nashville, Tennessee, area ran dry Friday, victim of an apparent rumor that the city was running out of gas.

He said he has no idea about the origin of a rumor that there was going to be no gas in Nashville. One reporter called him, saying she had heard that Nashville would be without gas within the hour, he said.

Hearing the rumor, drivers rushed to fill their cars and trucks.

CNN called 13 Nashville gas stations at random. Only two reported having gas, and one said it was almost out. The stations said they were being told they would not get more until Monday or Tuesday.

Katie Givens Kime, visiting from Atlanta, Georgia, was trying to fill up her tank for the trip home when she ran into trouble — when she was already low on gas.

“We panicked and looked online,” she said. “And holy cow, there is no gas in the city. … It has definitely gripped the city, for sure.”

One store clerk told her there was no way she could get gas to go back home, she said.

Williams said some drivers were following gas trucks to see where they were headed, and lines at some stations were a mile long. Fuel was continuing to enter the city, however, as pipelines were working and barges were coming in.

He likened it to Southerners rushing out to stock up on bread and milk when they hear it might snow. As stations began running low, the situation snowballed, he said.

One station reported selling as much gas Friday as it usually does in a weekend, Williams said.

The phenomenon seemed to be isolated to the Nashville area, he said.

Givens Kime said she found a station online that still had gas and waited more than an hour to pump it.

“People were freaked out,” she said. A “renegade bunch” of men helped direct traffic to and from the pumps, even taking drivers’ cash inside for them. She described people filling cans and other containers as well as cars.

She said that the station was not engaging in price gouging but that “emotions were running very high” among drivers.

This entry was posted in RagBlog and tagged American Society, Economic Collapse. Bookmark the permalink.

1 Response to Signs of a Sick Society, Episode XXXIX