Signs of a Sick Society

This is also a well-known characteristic of fascist governments. 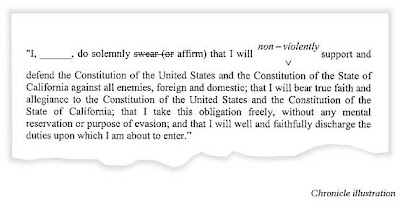 California State University East Bay has fired a math teacher after six weeks on the job because she inserted the word “nonviolently” in her state-required Oath of Allegiance form.

Marianne Kearney-Brown, a Quaker and graduate student who began teaching remedial math to undergrads Jan. 7, lost her $700-a-month part-time job after refusing to sign an 87-word Oath of Allegiance to the Constitution that the state requires of elected officials and public employees.

“I don’t think it was fair at all,” said Kearney-Brown. “All they care about is my name on an unaltered loyalty oath. They don’t care if I meant it, and it didn’t seem connected to the spirit of the oath. Nothing else mattered. My teaching didn’t matter. Nothing.”

A veteran public school math teacher who specializes in helping struggling students, Kearney-Brown, 50, had signed the oath before – but had modified it each time.

She signed the oath 15 years ago, when she taught eighth-grade math in Sonoma. And she signed it again when she began a 12-year stint in Vallejo high schools.

Each time, when asked to “swear (or affirm)” that she would “support and defend” the U.S. and state Constitutions “against all enemies, foreign and domestic,” Kearney-Brown inserted revisions: She wrote “nonviolently” in front of the word “support,” crossed out “swear,” and circled “affirm.” All were to conform with her Quaker beliefs, she said.

But Cal State East Bay wouldn’t, and she was fired on Thursday.

Modifying the oath “is very clearly not permissible,” the university’s attorney, Eunice Chan, said, citing various laws. “It’s an unfortunate situation. If she’d just signed the oath, the campus would have been more than willing to continue her employment.”

Modifying oaths is open to different legal interpretations. Without commenting on the specific situation, a spokesman for state Attorney General Jerry Brown said that “as a general matter, oaths may be modified to conform with individual values.” For example, court oaths may be modified so that atheists don’t have to refer to a deity, said spokesman Gareth Lacy.

Kearney-Brown said she could not sign an oath that, to her, suggested she was agreeing to take up arms in defense of the country.

The trouble began Jan. 17, a little more than a week after she started teaching at the Hayward campus. Filling out her paperwork, she drew an asterisk on the oath next to the word “defend.” She wrote: “As long as it doesn’t require violence.”

The secretary showed the amended oath to a supervisor, who said it was unacceptable, Kearney-Brown recalled.

Shortly after receiving her first paycheck, Kearney-Brown was told to come back and sign the oath.

This entry was posted in RagBlog and tagged Civil Liberties, Personal Freedom. Bookmark the permalink.