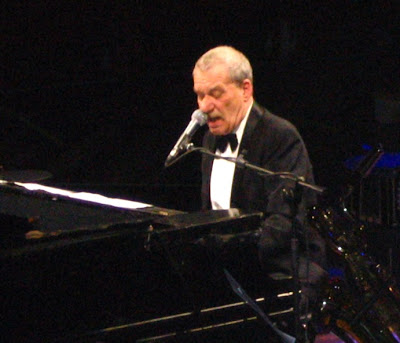 See video of Vieni via con me below.

If you’ve never heard of this guy, you should. So here he is in all his Italian glory, singing a wonderful dance tune, Archietture Lontane from his 1995 album Una Faccia in Prestito.

His performing career began as a vibraphone player in local and touring bands (Saint Vincent Jazz Festival). He began songwriting with his brother Giorgio Conte early on and eventually began writing songs of his own. As a poet, painter and lawyer as well as a musician, he first earned attention during the late ’60s and early ’70s as the creative force behind hits from Adriano Celentano and Patty Pravo. Conte began his solo career with a 1974 self-titled LP, with subsequent efforts like 1987’s Aguaplano and 1990’s Parole D’Amore Scritte a Macchina enjoying considerable success throughout Europe. 1998’s Paolo Conte, a greatest-hits collection, was his first U.S. release. His compilation album is titled The Best of Paolo Conte.

Some of his hits were used in many movies, for example “Come di” in Mickey Blue Eyes (1999), “Vieni via con me” in French Kiss (1995) , Mostly Martha (2001), Welcome to Collinwood (2002), and the “Fritz” Coca Cola commercial that was widely shown in US movie theaters in early 2006. As well as in No Reservations (2007), “Sparring Partner” in 5×2 (2004) (French humourist Pierre Desproges used both in his Chroniques de la haine ordinaire.) One of Conte’s greatest hits, Azzurro (1968, performed by A. Celentano and later many other artists) was “appropriated” by the fans of the Italian national football team—affectionately called “gli azzurri” (“The blue ones”)—as a sort of unofficial “anthem” during the 2006 FIFA World Cup.

And since I can never get enough of this style … There are many other video and audio resources on the Internet if you are interested.

Paolo Conte – Come Away with Me (Vieni via con me)

This entry was posted in RagBlog and tagged Europe, Music, Musicians. Bookmark the permalink.