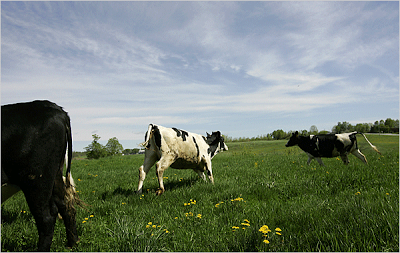 Some of the 75 dairy cows at Guy Choiniere’s farm in Highgate, Vt., where feed has been changed to plants like alfalfa and flaxseed to reduce the methane emitted when they belch. Photo: Cheryl Senter for The New York Times.
Greening the Herds: A New Diet to Cap Gas
By Leslie Kaufman / June 4, 2009

HIGHGATE, Vt. — Chewing her cud on a recent sunny morning, Libby, a 1,400-pound Holstein, paused to do her part in the battle against global warming, emitting a fragrant burp.

Libby, age 6, and the 74 other dairy cows on Guy Choiniere’s farm here are at the heart of an experiment to determine whether a change in diet will help them belch less methane, a potent heat-trapping gas that has been linked to climate change.

Since January, cows at 15 farms across Vermont have had their grain feed adjusted to include more plants like alfalfa and flaxseed — substances that, unlike corn or soy, mimic the spring grasses that the animals evolved long ago to eat.

As of the last reading in mid-May, the methane output of Mr. Choiniere’s herd had dropped 18 percent. Meanwhile, milk production has held its own.

The program was initiated by Stonyfield Farm, the yogurt manufacturer, at the Vermont farms that supply it with organic milk. Mr. Choiniere, a third-generation dairy herder who went organic in 2003, said he had sensed that the outcome would be good even before he got the results.

“They are healthier,” he said of his cows. “Their coats are shinier, and the breath is sweet.”

Sweetening cow breath is a matter of some urgency, climate scientists say. Cows have digestive bacteria in their stomachs that cause them to belch methane, the second-most-significant heat-trapping emission associated with global warming after carbon dioxide. Although it is far less common in the atmosphere than carbon dioxide, it has 20 times the heat-trapping ability.

Frank Mitloehner, a University of California, Davis, professor who places cows in air-tight tent enclosures and measures what he calls their “eruptions,” says the average cow expels — through burps mostly, but some flatulence — 200 to 400 pounds of methane a year.

More broadly, with worldwide production of milk and beef expected to double in the next 30 years, the United Nations has called livestock one of the most serious near-term threats to the global climate. In a 2006 report that looked at the environmental impact of cows worldwide, including forest-clearing activity to create pasture land, it estimated that cows might be more dangerous to Earth’s atmosphere than trucks and cars combined.

In the United States, where average milk production per cow has more than quadrupled since the 1950s, fewer cows are needed per gallon of milk, so the total emissions of heat-trapping gas for the American dairy industry are relatively low per gallon compared with those in less industrialized countries.

Dairy Management Inc., the promotion and research arm of the American dairy industry, says it accounts for just 2 percent of the country’s emissions of heat-trapping gases, most of it from the cows’ methane.

Still, Erin Fitzgerald, director of social and environmental consulting for Dairy Management, says the industry wants to avert the possibility that customers will equate dairies with, say, coal plants. It has started a “cow of the future” program, looking for ways to reduce total industry emissions by 25 percent by the end of the next decade.

William R. Wailes, the head of the department of animal science at Colorado State University who is working on the cow of the future, says scientists are looking at everything from genetics — cows that naturally belch less — to adjusting the bacteria in the cow’s stomach.

For the short run, Professor Wailes said, changes in feed have been the most promising.

Stonyfield Farm, which started as a money-raising arm for a nonprofit organic dairy school and still has a progressive bent, has been working on the problem longer than most.

Nancy Hirshberg, Stonyfield’s vice president for natural resources, commissioned a full assessment of her company’s impact on climate change in 1999 that extended to emissions by some of its suppliers.

“I was shocked when I got the report,” Ms. Hirshberg said, “because it said our No. 1 impact is milk production. Not burning fossil fuels for transportation or packaging, but milk production. We were floored.”

From that moment on, Ms. Hirshberg began looking for a way to have the cows emit less methane.

A potential solution was offered by Groupe Danone, the French makers of Dannon yogurt and Evian bottled water, which bought a majority stake in Stonyfield Farm in 2003. Scientists working with Groupe Danone had been studying why their cows were healthier and produced more milk in the spring. The answer, the scientists determined, was that spring grasses are high in Omega-3 fatty acids, which may help the cow’s digestive tract operate smoothly.

Corn and soy, the feed that, thanks to postwar government aid, became dominant in the dairy industry, has a completely different type of fatty acid structure.

When the scientists began putting high concentrations of Omega-3 back into the cows’ food year-round, the animals were more robust, their digestive tract functioned better and they produced less methane.

The new feed is used at 600 farms in France, said Julia Laurain, a representative of Valorex SAS, a French company that makes the feed additives and that is working with Stonyfield Farm to bring the program to the United States.

A reason farmers like corn and soy is that those crops are a plentiful, cheap source of energy and protein — which may lead some to resist replacing them. But Ms. Laurain said flax cost less than soy, although grain prices can fluctuate. The flax used in the new feed is grown in Canada, is often heated to release the oil in its seed and yield the maximum benefit for the cow. For now, however, that process is expensive because there is no plant for it in the United States, and the flax is shipped to Europe for heating.

If the pilot program was expanded, she said, a heating facility would be built in the United States, and processing costs could be slashed.

Ms. Laurain maintains that even if the feed costs more, it yields cost savings because the production of milk jumps about 10 percent and animals will be healthier, live longer and produce milk for more years.

The methane-reduction results have been far more significant in France than in the Vermont pilot — about 30 percent — because the feed is distributed there not just to organic farms, where the animals already eat grass for at least half the year, but also to big industrial farms.

Farms in the Vermont program, like Mr. Choiniere’s, are also relying on Valorex’s method for measuring methane reduction, which involves analyzing fatty acids in the cows’ milk. Professor Wailes, of Colorado State, said he found that method for testing for reduced methane emissions promising. “I believe it is very possible,” he said.

Mr. Choiniere said that regardless of how the tests turned out, he planned to stick with the new feeding system.

“They are healthier and happier,” he said of his cows, “and that’s what I really care about.”

This entry was posted in RagBlog and tagged Agriculture, Environment, Global Warming. Bookmark the permalink.