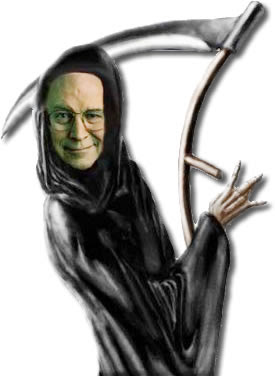 Well, this should yield lots of great results. Maybe Darth will even give all of us the same “respect” he gave Patrick Leahy on the Senate floor a few years ago.

In sharp contrast to views recently expressed by Vice President Cheney, a new poll finds that an overwhelming majority of Americans believe government leaders should pay attention to public opinion polls and that the public should generally have more influence over government leaders than it does.

When ABC News correspondent Martha Raddatz cited polling data showing majority opposition to the Iraq war, Cheney responded, “So?” Asked, “So–you don’t care what the American people think?” he responded, “No,” and explained, “I think you cannot be blown off course by the fluctuations in the public opinion polls.”

Americans also roundly reject the position put forward by White House spokeswoman Dana Perino in an effort to explain Cheney’s comments. Asked whether the public should have “input,” she replied, “You had your input. The American people have input every four years, and that’s the way our system is set up.”

These findings are part of a larger international poll conducted by WorldPublicOpinion.org, an international research project managed by the Program on International Policy Attitudes at the University of Maryland. The poll of 975 Americans was fielded from January 18 to 27 by Knowledge Networks. The margin of error was +/-3.2 percent.

The focus of the study is the principle expressed in the Universal Declaration of Human Rights that “The will of the people should be the basis of the authority of government.” Presented this statement, 87 percent of Americans say they agree with it.