Socialism, Capitalism : What’s in a Name? 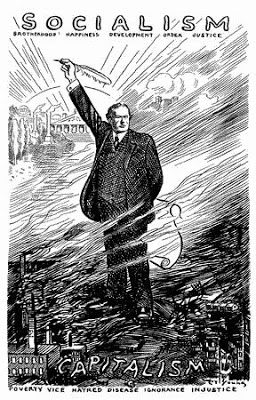 With all the accusations and platitudes being bandied about, David Hamilton’s observations about politco-economic nomenclature and the times we’re in just might be a useful addition to the discussion.

‘The pure socialist and laissez faire capitalist approaches are extreme poles of a continuum and our reality is closer to the center.’
By David P. Hamilton / The Rag Blog / October 30, 2008

The categories commonly used, socialist and capitalist, have little relationship to current reality. Everyone from Milton Friedman to Fidel Castro believes in a mixed economy, part public and part private. The traditional terms paint a world in black and white that actually has only infinite shades of gray. Were Barack Obama and John McCain running for the presidency of France, Obama would be the Socialist Party candidate and McCain the “Gaullist”. Socialism is the strengthening of the commons and that is a general theme of the Obama campaign.

Socialist policies might include a progressive income tax, nationalizations of essential services (e.g., electricity or railroads), pensions for the elderly (Social Security), government investment in major industries, universal health care, free public education, support for unions or any program that enhances the public sector’s ability to protect the interests of the society as a whole.

Conversely, we are all capitalists in that we support the right of individuals to exercise their entrepreneurial ambitions, within government established regulations. I might want to open a restaurant and no one would deprive me of that right provided I met health standards and paid my taxes. The petty bourgeoisie is not the enemy.

It would help advance discussion if we recognized that the pure socialist and laissez faire capitalist approaches are extreme poles of a continuum and our reality is closer to the center. Of course, the US has historically been the economy most radically oriented toward the laissez faire poll, the “American model”. But what has really taken an ideological hit in the recent financial crisis is precisely this “American model”. Look for Obama to reorient us more toward the economic model that is characteristic of the social democracies of the EU.

This entry was posted in Rag Bloggers and tagged Capitalism, Presidential Campaign, Socialism. Bookmark the permalink.