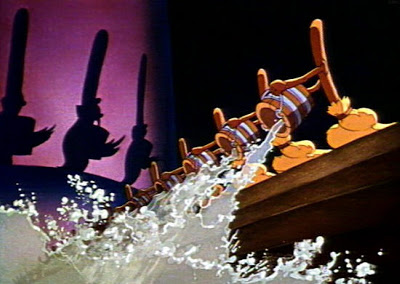 We’ve all become tutored in the past years about “tipping points”:

I don’t have to go on. Yeats nailed it right after the First World War:

“Things fall apart,” he wrote. “The center cannot hold;
Mere anarchy is loosed upon the world…”

With the industrial/scientific revolutions came “The Sorcerer’s Apprentice” — surely the myth of an era just passed. Most of you are old enough, or young enough to remember that marvelous sequence in (early!) Disney’s Fantasia, where Mickey Mouse — to the accompaniment of Paul Dukas’ symphonic scherzo, The Sorcerer’s Apprentice — tries to get the multiplication of uncontrollable brooms to stop “fetching water” after his magic command.

A detail I particularly love is Mickey awash in a whirlpool, hanging onto, and frantically searching, a book of magic for the missing words, trying to find the formula to make the water stop — and licking his finger to turn the page. I find this both hilarious and profound.

Goethe, 143 years before Disney, noted this significant tale in a poem once memorized by all German schoolchildren:

Fortunately for the apprentice, the master finally returns to make all things well.

The theme of losing control of our tools is caught most beautifully for me in a little passage from Lewis Mumford (1952):

It is as if we had invented an automobile that had neither a brake nor a steering wheel, but only an accelerator, so that our sole form of control consisted in making the machine go faster. For a little while, on a straight road, we might feel safe, and even, as we increased our speed, gloriously free; but as soon as we wanted to reduce our speed or to change our direction or to back up, we should find that no provision had been made for this degree of human control — the only open possibility was Faster, faster!

Think of Mickey’s dream in which he stands on a rock conducting the planets and the comets and the sea, the surprisingly benign aspiration of a little mouse-man given complete control of the earth and its elements, a naive, diminutive Everyman sharing Tom and Huck’s dream of “having a spectacular lot of fun without being malicious.”

But now with us, the dream has turned malicious, the master does not return, the magic word seems lost. And with the recent, uncontrolled, seemingly uncontrollable Gulf oil “spill” (like knocking over a wineglass?) we — as a culture — may have actually tipped. Tipped into a paradigm shift.

The old paradigm: Go for it! If it breaks, we can fix it. Isn’t science wonderful?

And behold — the new paradigm: WE CAN’T FIX IT. There is no magician, even with three PhDs or 90 billion bucks.

This — for some — is startling. For others — many others — it means death. If “The Sorcerer’s Apprentice” was the myth of the time just passed, the myth for now is Endgame.

Our Faustian civilization has reached its allotted time, and the end is Marlowe’s, not Goethe’s.