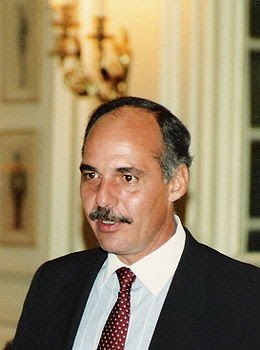 Former president of El Salvador Alfredo Cristiani Burkard, photographed in 1989 in London.
Spanish human rights organization files suit against Alfredo Cristiani and 14 others for involvement in Jesuit massacre of 1989.
By Leah Wilson / The Rag Blog / November 17, 2008

SAN SALVADOR — The Association for Human Rights in Spain (APDHE, its initials in Spanish), with the support of the San Francisco-based Center for Justice and Accountability (CJA), has filed a criminal complaint with the Spanish High Court against former president of El Salvador Alfredo Cristiani Burkard and 14 former members of El Salvador’s armed forces for the murder of six Jesuit priests, their housekeeper, and her daughter on November 16, 1989 by the US-trained and equipped Atlacatl Battalion.

The news comes just as Salvadorans commemorate the 19th anniversary of the massacre. The complaint will now go before the Spanish High Court who will decide whether to press charges against and seek the extradition of Cristiani and the 14 former military officials and soldiers for trial.

Spanish courts made history in 1998 by securing the arrest in England of former Chilean dictator Augusto Pinochet, following a Spanish legal principle that crimes against humanity may be prosecuted in any country. Cristiani, member of the right-wing Nationalist Republican Alliance party (ARENA) and president of El Salvador from 1989-94, is being charged with aiding in the cover-up of a crime against humanity. General René Emilio Ponce, who as army chief ordered the murder of one of the priests and any witnesses to the crime, is being charged along with 13 other military officials and soldiers for crimes against humanity, murder, and state-sponsored terrorism. The APDHE and CJA confirm that there is sufficient proof including eyewitness accounts and government documents to prove the guilt of those charged.

Regarding the charges against Cristiani, current president of El Salvador Tony Saca of the ARENA party said, “Definitively, president Cristiani had absolutely nothing to do with this,” and added, “we are with him and support him, and we will support him until the last moment because he is an historic man for our country.”

The 1991 trials and convictions in El Salvador of two military officers for the massacre of the Jesuits was followed up by a 1993 Amnesty Law — granting amnesty to crimes committed during the Civil War — and the officers’ release. The Spanish criminal complaint brings hope that justice will be brought to the victims of the murders, massacres and human-rights abuses committed by the US-backed and US-funded Salvadoran military and death squads. It also brings hope that a renewed effort to do away with the Amnesty Law could bring justice to the countless victims of crimes and human rights abuses here in El Salvador.

This entry was posted in Rag Bloggers and tagged Crimes Against Humanity, Criminal Justice, El Salvador, Spain. Bookmark the permalink.