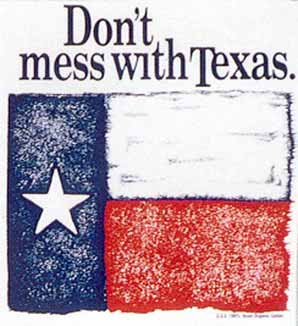 Transportation policy: CAMPO about to make a big mistake.
By Roger Baker / The Rag Blog / November 17, 2008

AUSTIN — The Capital Area Metropolitan Planning Organization (CAMPO) may be about to make a great historic mistake in transportation policy; it would directly affect US 290 West too. There may be a December CAMPO vote on this.

JP Morgan Chase Securities is teaming up with the Central Texas Regional Mobility Authority (CTRMA) as the latter’s unofficial bond counsel partner. They are telling CAMPO that they have to change Austin’s metro roadway planning policy fast or they won’t set up the toll road bond deals.

Even though there are no deals on the table!

The public can’t even see the revenue numbers behind the deals until 90 days before the bonds are sold. 40 years of toll debt is envisioned as the local transportation burden from tolls to pay off the bonds.

There is no contract between the bank in control and the CTRMA, which is closely controlled by the Texas Department of Transportation (TxDOT). Morgan is a relatively unregulated investment bank trying to set up bond deals on which it gets a cut. How? By matching investors with the road lobby; TxDOT and the real estate/road promoters consultants and road contractors.

In fact, Morgan is telling the CTRMA, without leaving much of a paper trail, that CAMPO needs to quickly approve a sweeping change in transportation policy to tie ALL the CTRMA’s proposed toll roads, ringing and crisscrossing Austin, into one giant toll road system to get Morgan’s help with road bonds.

This policy change is based on totally speculative virtual deals promised by Morgan. The public is not being allowed to see the traffic and revenue studies, and won’t be until just before the bonds are issued, which must mean the numbers don’t look very good. This ties into the fact that the bonds cannot be insured according to CTRMA director Mike Heiligenstein due to the high cost of bond insurance, which is obviously related to high bond default risk.

So CAMPO is urged to sign fast to shift the toll money between corridoras, as is now prohibited by the Eckhardt amendments unanimously approved by CAMPO a year ago. Or else CAMPO won’t get the pot of toll road bond cash that Morgan says is waiting, if only they would shift to more banker-friendly road funding policies.

Meanwhile the CTRMA is trying to pressure CAMPO to change policy with pretty blatantly dishonest funding claims applying to all the tollroads roads in the new “Statement of Purpose” it wants CAMPO to adopt.

One of the worst of a number of the false and unsubstantiated and shaky claims passed from the bankers to the CTRMA and then to CAMPO for approval is posted on CAMPO’s web site here.

Then go to: “Public Hearings for Statement of Purpose and the Financial Plan for a Portion of 290E” and download the PDF file and read the text in the ‘Statement’ on the toll road justification and the reason for setting up the new and much bigger system that the bank wants.

Then click on this link and then on the public hearings of which the CTRMA ‘Statement” is the focus:

The CTRMA Director repeats this clearly false assurance of future bond funding at this link:

“Given the severe transportation financing limitations our nation is facing, we are proud to be able to make the investment needed to bring these critical projects to the region,” said Heiligenstein.

The truth is that the CTRMA is assuming that about a third of the toll road money in the form of federal TIFIA loans for toll roads will be available. If not, the CTRMA’s whole toll road funding plan falls apart.

But our new president assures us a change is coming. What will Obama do? Obama’s enviro web site (thanks Bruce Melton) says that he will favor a shift in public spending, on page 11, “Reform Federal Transportation Funding”, to favor smart sustainable growth and put a new emphasis on public transportation alternatives to building roads as usual.

But what if CAMPO shifts its policies to favor the bank, but then Morgan, who has no contract or stake in the deal, walks away? Tough luck; it’s then up to CAMPO and local taxpayers to pick up the pieces and start over.