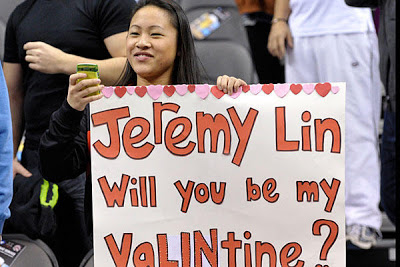 Jeremy fan at the Knicks game against the Toronto Raptors, Feb. 14, 2012. Photo by Mike Cassese / Reuters.
Enter the Dragon:
NBA lucks out in New Year
with Knicks’ Jeremy Lin-sanity

When professional basketball first started in the 1920s, as with other professional sports organizations, there were separate leagues for black and white teams. The U.S. then was a black-and-white country, with a black-and-white population, newspapers, and viewpoints characterizing public life. The advent of black-and-white television in the early 1950s merely reinforced a message of separation.

When professional basketball consolidated in the National Basketball Association (NBA), however, it didn’t take long for the sport to become largely dominated by black players. Throughout the 1980s and 90s, many teams fielded all-black fives, even if a white guy or two sat on the bench or played a few minutes in trash time, and to some extent this limited the league’s popularity. This year’s All-Star starters are all black, and apparently there are some white so-called sports fans who can’t get past that. Their loss.

In an era when few successful white college players seemed interested in turning pro (medicine or law being even more profitable?), the league turned to the international arena for player diversity. There have been hundreds of international players from over 60 countries in the NBA and its predecessors since Italian Hank Biasatti, the first, in 1946, but they were rare until the late 1990s.

Since the early 2000s, the league has taken on a strong international flavor. Generally acknowledged as the greatest foreign-born star was Hakeem Olajuwon, the Houston Rockets’ center who was a dominating force in the league from 1984-2002. Hakeem was the first foreign-born MVP, was a 12-time all-star and the leader of two NBA championship teams, and is now included in most short lists of the best players in the history of the game.

Not only European players like Hedo Turkoglu (Turkey), Zrydunas Ilgauskas (Lithuania, formerly Soviet Union), and Vlade Divac (SFR Yugoslavia, now Serbia), but other African stars like Dikembe Mutombo (Democratic Republic of the Congo), Michael Olowokandi (Nigeria), and Luol Deng (originally from Sudan, now South Sudan; now a British citizen) taught sports announcers to pronounce anything without stumbling over it, and annually added to their home countries’ cred on national teams.

Several have become naturalized U.S. citizens. Quite a few teams can put five players on the floor, none of whom were born in the United States.

Add to this mix an up-and-coming generation of multi-ethnic stars — Delonte West and Blake Griffin are but two — and the NBA and its fan base may arguably be claimed to be the least racist or nationalistic in pro sports. Only soccer is played by more diverse peoples in more different places, but soccer fans tend to be somewhat more “emphatic” in their local or national loyalties. When conflicts in some NBA players’ home countries have burst out, players have to a man been advocates for peace, or at least have kept silent. 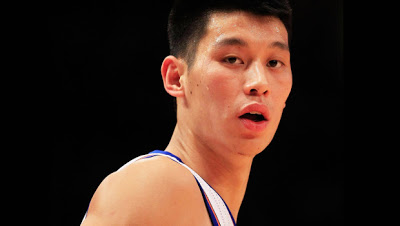 Since the old black-and-white days in the U.S., the growth of the Hispanic population has been a game-changer in hundreds of ways. In NBA cities like San Antonio, Miami, LA, Dallas, Phoenix, and others with large Hispanic populations, regular promotions now cater to Spanish-speaking fans. In 2010 a 15-night league-sponsored “Noche Latina” promotion sought to raise Hispanic attendance figures.

A fair number of Spaniards, nine Puerto Ricans, and three Mexicans have made it to the NBA, along with a handful of other Hispanics, but the U.S. Hispanic population overall has been slow to warm to the sport. Now there are signs of change, as exciting homegrown players like brothers Robin and Brook Lopez, and international stars like brothers Paul and Marc Gasol, and Rudy Fernandez (all three from Spain) and J.J. Barea (Puerto Rico) show that brown men can jump.

Among the NBA’s efforts at international outreach, the mixed success of Chinese players has been fascinating. Only five Chinese players have been in the league since Wang Zhizhi in 2001. Yao Ming, who came to the NBA in 2002 and retired in 2011 after persistent knee injuries, was the most ballyhooed player in the history of the game before he ever arrived.

The exceptionally tall Han Chinese, son of two Olympians, made a valiant effort to become an effective defender and to master the slippery English language, and although in many ways he never fulfilled expectations on the court, he became an effective spokesman and, in China, a household icon.

In every fan vote for All-Star players while Yao was active, his totals exceeded those of all other players combined. But enthusiasm for Yao in mainland China may not have translated into enthusiasm for the NBA and basketball as a whole, at least not yet.

Five Asian-Americans had also played in the league with no discernible national or international impact. But the arrival of undrafted Harvard economics grad Jeremy Lin on the scene in late January, as an off-the-bench and then starting point guard for the New York Knicks, has raised a new banner of Chinese basketball frenzy.

Born in LA to immigrant Taiwanese parents, Lin is as all-American as his new Knicks teammate J.R. Smith, as Magic or Bird, as Rasheed Wallace or Kevin McHale. Lin grew up playing ball in addition to all the stereotypical brainy things Asian-American kids are supposed to do. Today his brilliant court leadership, reminiscent of a younger Steve Nash, has unleashed a wave of “Lin-sanity” from coast to coast and in China and Taiwan.

For NBA owners and executives, the “Lin effect” is an unlooked-for blessing in a season that started out ugly, with a long-running labor dispute between millionaire players and billionaire owners, and that will only manage an abbreviated 62-game season by scheduling unprecedented back-to-back-to-back games and eliminating the practice of every team playing at least once on every other team’s court.

Many fans barely hoped for something worth watching before the All-Star break, before Lin’s hard-charging, smart, winning play set cynical old New York on fire. A stagnant dispute between Madison Square Garden, Inc. and Time-Warner Cable Television was quickly resolved, allowing Knicks home games again to be televised in the state, when irate fans deluged both companies with demands to, “Settle!” Meanwhile, in “Chinatowns” all over the country and abroad, Asian-Americans gather to watch big-screen teevees in homes, schools, auditoriums, etc., cheering a new star.

If there is still an American melting pot, it is in the school yards and gyms of the nations, where a racist or belittling remark can be effectively countered by sinking a three from beyond the arc, weaving between four bigger players to the net, or passing across court for the easy basket. In the 1980s, kids of every color, all over the world, wanted to “be like Mike.” Today they’re free to want to be like D-Wade, like Dirk, like Hakeem “the Dream,” like Luis Scola, and at last, like Jeremy.