Some days, everything you need to know from the newspaper is in the obituaries.

Some days, everything you need to know from the newspaper is in the obituaries. So it was on the day we lost Ursula Kroeber Le Guin, Hugh Masekela, and Rosie the Riveter. To notice this sad news is to gaze back over the three powerful social trends that remade the world after World War II.

It’s a fine bit of irony that these three waves of change swept away the handiwork of the totalitarians offered by the right in the person of Adolf Hitler and by the left in the man charged with turning the Bolshevik Revolution into a governing praxis, Joseph Vissarionovich Stalin. Both Hitler and Stalin promised to remake the world in ways that did not happen after the German and Russian bloodbaths.

The postwar order came with the rise of a robust middle class capable of carrying entire nations to prosperity joined with a worldwide movement for racial equality and — most fundamental of all — a reworking of sex roles to create the world against which violent fundamentalist Islam, the nativist parties in Europe, and the presidency of Donald John Trump represent the defensive ramparts.

Jazz origins were black, but it transcended those origins and obliterated racial lines against all odds. During the big band era in the U.S., touring with an integrated band caused great inconvenience in putting together places to stay and places to eat. The inconvenience did not matter. 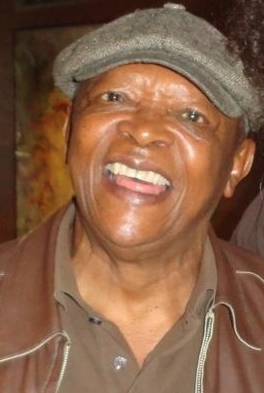 Duke Ellington hired white musicians and Benny Goodman hired black musicians because the driving force was the music. It was the music that forced Hugh Masekela, who had been touring his native South Africa with the Jazz Epistles, to choose exile.

After the Sharpeville Massacre in 1960, more than 10 black people could not gather in South Africa. The Jazz Epistles were sowing the latest jazz sub-genre, bebop, but what was inconvenient in the U.S. — entertaining across racial lines — had become illegal in South Africa.

To this day, it is hard for jazz musicians to earn a living in the U.S., where jazz was born. Still, jazz made cultural incursions into Europe every bit as significant as military incursions and jazz conquered sub-Saharan Africa and Latin America, picking up a little local seasoning in each country.

Masekela never renounced his South African citizenship. He said he was an exile and he said why as he played for racially mixed audiences, denouncing apartheid with his voice and his horn, a horn that became a shofar shaking the ramparts of racism.

If Hugh Masekela’s South African trumpet was a symbolic ram’s horn blowing down the walls of inequality, Rosie the Riveter became a human symbol of women’s contributions to beating Hitler and a national awakening to the wasting of women’s skills and competence. 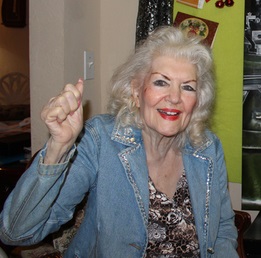 While there was a trend of laying women off to put men back to work after the war, Rosie had shaken things loose and started a wave of demands on the system that remain to this day for parity in wages and working conditions and access to occupations based on ability.

Because Rosie was an artist’s representation of a class of women, identifying the individual who inspired the meme was a challenge. Lots of women had taken up rivet guns and similar tools and lots of pictures were taken of women challenging the idea of “men’s work.”

Rosies came and went over the years until Dr. James J. Kimble of Seton Hall University in New Jersey published the result of six years of research in an academic journal, Rhetoric & Public Affairs, identifying the Rosie of a poster produced by the Westinghouse Electric Corporation with the slogan, “We Can Do It!”

The Westinghouse Rosie is not to be confused with the Norman Rockwell Rosie or Rosalind Walter, a riveter on the Corsair fighter, who inspired “Rosie the Riveter” as a hit song by Redd Evans and John Jacob Loeb. Rosie as a meme was very busy during the war.

The struggle for racial equality embedded in Hugh Masekela’s music and for women’s economic parity symbolized by Rosie the Riveter became currents in the flow of a new literary genre, speculative fiction, of which Ursula K. Le Guin was a founding mother. Le Guin began wearing the colors of “science fiction,” a genre that involved taking the cutting edge of the hard sciences — astronomy, mathematics, and most often physics — to the edges of human imagination. The most primitive science fiction was the “space opera,” exemplified by the plot of Star Wars IV: A New Hope. 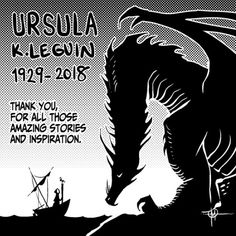 Dragon from A Wizard of Earthsea.

Ursula Le Guin’s parents were Alfred Kroeber, an anthropologist at the University of California, Berkeley, with substantial interest in the Native Americans of California, and Theodora Kroeber, the writer who told the story of Ishi, the last of his tribe to survive the spectacular genocide of California Indians. Ishi lived out his days as a human exhibit in what is now the Hearst Museum of Anthropology, where visitors can still hear his voice on recordings.

Le Guin was raised in the middle of the clash of cultures that destroyed most of indigenous California by parents who studied that clash and participated in it. The turn Le Guin took away from classic science fiction drew on the so-called “soft” sciences of anthropology, sociology, political science, and psychology.

The method was the same as classic science fiction. Her novel, The Left Hand of Darkness, won the top science fiction awards offered by both fans and professional writers, the Hugo and the Nebula. In it, she imagined an intelligent species with no sexes.

In The Lathe of Heaven, she imagined a man who could change the past and therefore the present with his dreams. By request, he dreams an end to racism, war, and overpopulation. All his dreams present nightmares of unintended consequences.

The Dispossessed was a thought experiment that explored major schools of political thought from radical collectivism to anarchism. It duplicated the feat of garnering both a Hugo and a Nebula.

Le Guin moved into fantasy with a trilogy beginning with A Wizard of Earthsea, which might be seen as a precursor to the Harry Potter books because, on Earthsea, magic works. A young man goes off to wizard school and makes an enemy who becomes his nemesis. Sound familiar?

The numerous awards the Earthsea trilogy raked in assumed it was intended for children. Le Guin resisted the pigeonholing and described it as “adult chauvinist piggery.” The current of Jungian psychology in the Earthsea books does not disqualify them as children’s literature because the story works without understanding Jung.

Ursula Le Guin took the cutting-edge trends of the social sciences to the edge of human imagination. In that process, she was bound to explore the upheavals in race relations and sex roles. In one week, we have lost two icons who made those upheavals happen and a writer with the imagination to suggest where things end up after they fall apart. That’s a lot of loss for one obituary page.