Steve Russell : Hiding Behind a Girl 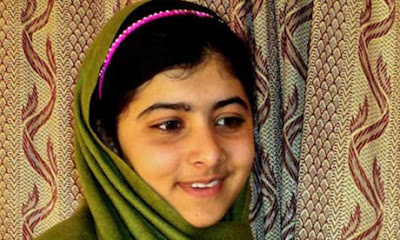 We are all Malala. Photo from Reuters.
I am Malala:
Hiding behind a girl

It is we sinful women
who come out raising the banner of truth
up against barricades of lies on the highways
who find stories of persecution piled on each threshold
who find that tongues which could speak have been severed.

In the time suck that is Facebook, I changed my profile picture to one of Malala Yousafzai. Besides improving the visual appeal of the page, what was I trying to accomplish?

Malala is a 15-year-old student from the Swat Valley in Pakistan, an area formerly ruled by the Taliban, Islamic fundamentalists who believe that educating girls is sinful. This policy, coming from God, is not negotiable. Enforcement of the policy is up to any devout Muslim, as the God the Taliban follow is apparently too puny to enforce its own rules.

Enforcement in areas infested by the Taliban has included burning of schools and throwing acid on girls seeking to study.

At age 11, Malala began a blog published in English and Urdu by the BBC called “Diary of a Pakistani Schoolgirl” under the nom de plume Gul Makai (Corn Flower). When the Taliban fled, Malala’s identity became common knowledge. Fluent in English, the girl appeared on British and American television advocating that Islam does not ban education of women.

What does this have to do with us?

In Afghanistan, American troops have been dying in the longest war in the history of this nation. It began in 2001 when the Taliban refused to surrender the leader of Al Qaeda, Osama bin Laden.

Our troops ran the Taliban out of the cities and into the Pashtun tribal area along the Afghanistan/Pakistan border. The Taliban had the support of the Pakistani government until we started shooting at the Taliban and demanded that the Pakistanis choose a side.

While Pakistan ostensibly chose our side, the Taliban are still a potent political force. We’ve seen this movie before. Only the Pashtun people can root out the Taliban insanity. Not the Pakistani army, and certainly not the U.S. army.

On October 9, a Taliban gunman attacked a school bus and shot Malala Yousafzai in the head. Two other girls were critically injured, but Malala was the target. “Malala was using her tongue and pen against Islam and Muslims,” the Taliban said, “so she was punished for her crime by the blessing of the Almighty Allah.”

So far, it appears that this crime has not received the blessing of the Pashtun people. Within the week, street demonstrations in Pakistani cities were displaying pictures of Malala.

Many years ago, world opinion was outraged when the Taliban destroyed ancient Buddhist statutes. The banning of television, sports, and music upset even local opinion. But by attempting to kill a young girl for the crime of wanting to go to school, the Taliban may finally have put themselves in a place where no decent person will shelter them.

What does this have to do with me, other than the fact that my son is a GI?

I would hope that no man with daughters would ask that question. Both of my daughters are well educated, and I’m proud of them. Two of my granddaughters are in college right now. One granddaughter is a toddler with a twin brother. While I know I will not live to see what they become, I have dreams for them both, no greater for the boy than for the girl. And there is another granddaughter who is Malala’s age.

I hate to trouble children with the existence of evil, but I hope my grandchildren will identify with Malala, with her courage and her ambition. They are Malala; all of our daughters are Malala. And so I am Malala.

Malala’s pen name, Gul Makai, comes from the heroine of a Pakistani folk tale, a Romeo and Juliet story, where the lovers meet at school. The romance between Gul Makai and her lover, Musa Khan, creates a war between their tribes.

Gul Makai goes to the religious leaders and persuades them, by reference to the Holy Quran, that the grounds for the war are “frivolous.” Inspired by the teachings of a girl, the leaders place themselves between the warring parties, holding the Quran over their heads, and persuade the two sides as Gul Makai has persuaded them. To seal the peace, the lovers are united in marriage.

According to the English translation by Masud-Ul-Hasan, “Most of the love stories generally have tragic ends; in the case of… Musa Khan and Gul Makai… events took a different turn. The credit for this goes to Gul Makai. She did not rest content to love, and die. She was a woman of action; she loved, won, and lived.”

Until Gul Makai, Malala Yousafzai, the lover of knowledge, is out of the hospital, this old retired teacher will hide behind the face of a brave young girl. I am Malala.

UPDATE ON January 4, 2013. I’m happy to report that people happening on my Facebook page will once more have to endure my mugshot, as Malala was released from the hospital today.

In the meantime, the Pakistani government has been moved by the international reaction to Malala’s shooting to publicly commit to girls’ education. Of course, like any other government, what the commitment means will depend on who is watching and who the players in government are from time to time, but saying as a matter of public policy girls can expect to be educated is a colossal step in the opposite direction from the one the Taliban were demanding when they tried to kill her.

Finally, Malala Yousafzai has been nominated for the Nobel Peace Prize. She would be the first child to win that honor. I hope all of us with daughters are rooting for her.

2 Responses to Steve Russell : Hiding Behind a Girl