Steve Russell : Questions of Law in the Shooting of Trayvon Martin 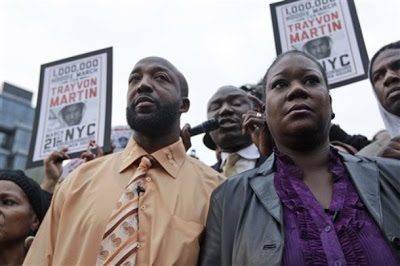 The biggest question the Trayvon Martin case has raised for me, and I have yet to see discussed by the public, particularly in light of the conversation Trayvon Martin was alleged to have had with his girlfriend during the confrontation, in which she or they reached the conclusion he should run: what happened to Trayvon Martin’s statutory and common law right to self defense?

One colleague of mine admitted that, depending on what he was thinking as the unidentified truck chased him, Martin might have had a privilege to use deadly force, had he been armed.

I was thinking that if he was a white guy chased by a black guy in a truck, he would CERTAINLY have a privilege to use deadly force. It’s obvious from the discussion how much race adds to what belief is “reasonable.”

Then my colleague added that, of course, Martin was too young to have a pistol permit.

Well, this causes me to think, if deadly force was justified, then, a fortiori, a simple assault was justified.

But could Zimmerman not, like a plainclothes police officer, verbally announce his lawful purpose? Wave some official ID?

No, because he had neither lawful purpose nor official ID.

It was lawful for him to engage Martin in conversation, no reasonable suspicion needed, but not if Martin did not care to be engaged in conversation… say, because being stalked made him nervous.

Suppose the facts turn out to be that Zimmerman confronted Martin with his gun and then got the gun taken from him or thought that was about to happen? Was he to allow himself to be shot?

In legal terms, yes. Having provoked the difficulty and then gotten the worse of it, he has forfeited his life in the sense that Martin can take it without criminal or civil liability. His choices are to be shot or, if Martin intends to take him into custody rather than pull the trigger, go to jail later. These are the consequences of his misjudgment.

Most people would choose to go to jail later, which is what is supposed to happen to someone who kills after creating the situation that made killing appear to be necessary. In other words, Zimmerman’s immediate decision to shoot may have been understandable without being justifiable. That’s why we have police investigations.

The police inaction is puzzling, and it got more so when the Chief, announcing his intention to step down temporarily, bragged about his experience investigating homicides.

Do you normally fail to run ballistics on a civilian weapon used in a homicide?

Do you normally run a toxicology screen on the shot but not on the shooter?

Do you normally make a public statement that a criminal record is “spotless” when it has blemishes? In my jurisdiction, the police are proud of having inflicted blemishes on the record of somebody who later kills.

Do you normally ask leading questions of witnesses?

Can’t imagine what people are so upset about. The kid was obviously high on Skittles and therefore posed a danger to us all.

[Steve Russell, Cherokee Nation of Oklahoma, lives in Sun City, Texas, near Austin. He is a Texas trial court judge by assignment and associate professor emeritus of criminal justice at Indiana University-Bloomington. Steve was an activist in Austin in the Sixties and Seventies, and wrote for Austin’s underground paper, The Rag. Steve, who belongs to the Cherokee Nation of Oklahoma, is also a columnist for Indian Country Today. He can be reached at swrussel@indiana.edu. Read more articles by Steve Russell on The Rag Blog.]