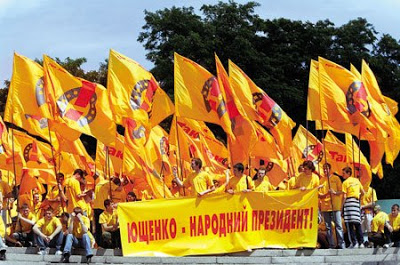 Was there meddling in the Orange Revolution in the Ukraine in 2004-2005?
Iran: Nonviolence 101

Washington’s promotion of nonviolent resistance in other countries is already casting suspicion on a number of activists and thinkers who, wittingly or not, have allowed themselves to become pawns in open — and covert — programs to ‘promote democracy.’

Peter Ackerman and Ramin Ahmadi called the revolution on January 4, 2006, in an article in the International Herald Tribune with the prophetic title “Iran’s Future? Watch the Streets.”

“Against all odds, nonviolent tactics such as protests and strikes have gradually become common in Iran’s domestic political scene,” they wrote. “Student activists have frequently resorted to, and the violent response of the regime and repeated attacks of the paramilitaries have not succeeded in silencing them.”

These “uncoordinated actions” had created “a grass-roots movement … waiting to be roused,” urged Ackerman and Ahmadi. But, “its cadres so far lack a clear strategic vision and steady leadership.”

Where would the Iranians find this vision and leadership?

“Nongovernmental organizations around the world should expand their efforts to assist Iranian civil society, women’s groups, unions and journalists,” the authors wrote. But, they left out a salient fact. In a chilling mix of Mahatma Gandhi and James Bond, Ackerman and Ahmadi themselves were already working with the United States government to engineer regime change in Iran.

A Wall Street whiz kid who made his fortune in leveraged buy-outs, the billionaire Ackerman was chair of Freedom House, a hotbed of neo-con support for American intervention just about everywhere. In this pursuit, he has promoted the use of nonviolent civil disobedience in American-backed “color revolutions” from Serbia to the Ukraine, Georgia, and Venezuela, where it failed.

Ahmadi teaches medicine at Yale and co-founded the Iran Human Rights Documentation Center, using initial grants of $1.6 million in 2004 from the U.S. Department of State, according to The New York Times. Washington reportedly continued its open-handed support in succeeding years, allowing the center to publicize the abuses of the Ayatollahs in English and Farsi.

Ahmadi and the center also ran regular workshops for Iranians on nonviolent civil disobedience. These were in Dubai, across the straits from Iran. Some of the sessions operated under the name Iranian Center for Applied Nonviolence and included a session on popular revolts around the world, especially the “color revolutions.”

According to The Times, at least two members of the Serbian youth movement Otpor participated, as did the International Center on Nonviolent Conflict, which Peter Ackerman founded and chaired. The sessions taught the Iranian participants how to use Hushmail, an encrypted e-mail account, and Martus software to upload information about human rights abuses without leaving any trace on the originating computer.

“We were certain that we would have trouble once we went back to Tehran,” said one of the Iranians. “This was like a James Bond camp for revolutionaries.”

No one should question the value of nonviolent civil disobedience for those who would bring down an unpopular government. Nor does the American training deny the very real grievances felt by the millions of Iranians who have taken to the streets — or by the lesser numbers of middle class women who banged pots and pans as part of earlier CIA destabilization programs in Brazil and Chile. Even more important, no one should doubt the courage and commitment of anyone who would stand up against the Ayatollahs and their repressive state power.

But the presence of American involvement adds several dynamics of its own, which Ackerman and Ahmadi failed to explain to their Iranian trainees.

First, the Americans decide where to put their efforts — and when to stop them. Washington does not fund or provide training and technology for non-violent revolutions against regimes it backs, as in Egypt, Saudi Arabia, Israel or Colombia.

Second, the American meddling makes it easier for the Ayatollahs to build support within their own ranks and among a large majority of the population for whatever repressive measures they finally decide to take.

Third, the nonviolent participants know nothing of other moves that the dark side of the American government might be making at the same time, whether staging acts of provocation, or supporting terrorist activities by breakaway groups such as the Baluchi Jundallah. Nor do the vast majority of participants know that American intelligence regularly uses training sessions of all kinds to recruit individual agents.

Fourth, the Iranian activists want to win. At least some in the America government might prefer to provoke a brutal defeat, a Tiananmen Square, to further isolate Iran and bring pressure within the Obama administration for a military response to the Iranian nuclear program.

Fifth, nonviolent tactics and organizational discipline offer ways to win the support of soldiers and police officers, isolate would be provocateurs, and avoid giving the government any easy excuse to bang heads and kill people. The same techniques also give the organizers ways to turn off the protest, as appears to have happened during the Orange Revolution in Ukraine.

One other dynamic has more lasting effects. During the Cold War, the CIA funded and manipulated a number of liberal and social democratic intellectuals, labor unions, civil society groups and publications. The CIA-run Congress for Cultural Freedom and its vast network were perhaps the best known. When journalists at Ramparts and elsewhere exposed the CIA’s hand, many of these individuals and groups became discredited for having allowed Cold Warriors and dirty tricksters to use them.

Washington’s promotion of nonviolent resistance in other countries is already casting suspicion on a number of activists and thinkers who, wittingly or not, have allowed themselves to become pawns in open — and covert — programs to “promote democracy.” Nonviolent activists everywhere need to draw a clear line against cooperating with governments of any stripe in this foreign meddling.