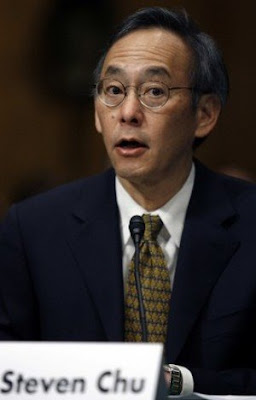 “I don’t think the American public has gripped in its gut what could happen,” says Nobel winner Steven Chu.” Photo by Jose Luis Magana / AP.
Agricultural diversity can soften the blow of global warming.

See ‘California farms, vineyards in peril from warming’ by Jim Tankersley, Below.

Now looks like the time to reconsider our agriculture subsidy, which funds Midwestern crops to make high calorie zero nutrient foods (corn oil, soy oil, high fructose corn syrup, white flour) and drives health costs up and the family farmers who actually grow food off the land. If we take the $50 billion annual subsidy and divide it up, cities of a million would be getting $100 million a year to subsidize local wholesome foods!

Diversity can soften the blow as major agricultural areas disappear with climate change.

‘We’re looking at a scenario where there’s no more agriculture in California,’ Steven Chu says. He sees education as a means to combat threat.

WASHINGTON — California’s farms and vineyards could vanish by the end of the century, and its major cities could be in jeopardy, if Americans do not act to slow the advance of global warming, Secretary of Energy Steven Chu said Tuesday.

In his first interview since taking office last month, the Nobel-prize-winning physicist offered some of the starkest comments yet on how seriously President Obama’s cabinet views the threat of climate change, along with a detailed assessment of the administration’s plans to combat it.

In a worst case, Chu said, up to 90% of the Sierra snowpack could disappear, all but eliminating a natural storage system for water vital to agriculture.

“I don’t think the American public has gripped in its gut what could happen,” he said. “We’re looking at a scenario where there’s no more agriculture in California.” And, he added, “I don’t actually see how they can keep their cities going” either.

A pair of recent studies raise similar warnings. One, published in January in the journal Science, raised the specter of worldwide crop shortages as temperatures rise. Another, penned by UC Berkeley researchers last year, estimated California has about $2.5 trillion in real estate assets — including agriculture — endangered by warming.

Chu is not a climate scientist. He won his Nobel for work trapping atoms with laser light. He taught at Stanford University and directed the Lawrence Berkeley National Laboratory, where he reoriented researchers to pursue “clean energy” technologies to help reduce the use of greenhouse-gas-emitting fossil fuels in the U.S., before Obama tapped him to head the Energy Department.

He stressed the threat of climate change in his Senate confirmation hearings and in a video clip posted on Obama’s transition website, but not as bluntly, nor in as dire terms, as he did Tuesday.

In the course of a half-hour interview, Chu made clear that he sees public education as a key part of the administration’s strategy to fight global warming — along with billions of dollars for alternative energy research and infrastructure, a national standard for electricity from renewable sources and cap-and-trade legislation to limit greenhouse gas emissions.

He said the threat of warming is keeping policymakers focused on alternatives to fossil fuel, even though gasoline prices have fallen over the last six months from historic highs. But he said public awareness needs to catch up. He compared the situation to a family buying an old house and being told by an inspector that it must pay a hefty sum to rewire it or risk an electrical fire that could burn everything down.

“I’m hoping that the American people will wake up,” Chu said, and pay the cost of rewiring.

Environmentalists welcomed the comments as a sharp break from the Bush administration, which often minimized research about global warming.

“To say the least, it’s a breath of fresh air,” said Bernadette Del Chiaro, who directs the clean air and global warming program for Environment California. “We’ve been worried about the impacts of global warming for years, even decades. He’s absolutely right — California stands to lose so much in our way of life.”

Global warming skeptics were not swayed. “I am hopeful Secretary Chu will take note of the real-world data, new studies and the growing chorus of international scientists that question his climate claims,” Sen. James Inhofe (R-Okla.), the top Republican on the Environment and Public Works Committee, said in a statement. “Computer model predictions of the year 2100 are simply not evidence of a looming climate catastrophe.”