Behind the Daschle Headlines : Blacklisting of Progressive Economists 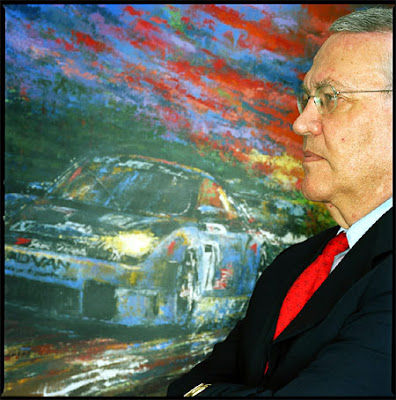 Progressive left out of the picture: Portrait of Leo Hindery from the July 14, 2007 New York Times. Photo by Damon Winter / NYT.

‘Leo Hindery, one of the few business leaders to use his wealth to challenge deregulation, corporate trade deals and anti-worker policies was blacklisted by the Obama administration well before the Daschle flap ever happened…’

Amid the swirling headlines about Tom Daschle withdrawing his nomination for Health and Human Service Secretary is a very dark, very foreboding story that tells us a lot more about what to expect from the Obama administration than a single nomination fight. It is a story that every single voter who supported Barack Obama because of his progressive economic platform should know about – and worry about.

As every newspaper in America has been happy to report, Daschle worked with venture capitalist Leo Hindery after he left the Senate. Hindery was a top economic adviser to John Edwards and later to Barack Obama, and many had floated his name for U.S. Trade Representative or Commerce Secretary. Now, though, that won’t be happening, as anyone mentioned near the Daschle flap is being shunned by the Obama administration.

But is that really why someone as accomplished as Hindery was never seriously considered for a top economic post in the administration? The media and the Obama administration would like us to believe yes – but the answer is no. It has far less to do with the Daschle situation and far more to do with Hindery’s progressive economic ideology.

Buried in a Politico dispatch , we get the real story:

Hindery did his best to carve out his own public profile, with generous contributions to a range of Democratic-leaning organizations and a 2005 book, “It Takes a CEO,” decrying outsourcing, Wal-Mart, and “an ethical and aesthetic ‘race to the bottom'” in the media industry.

He also hoped to land a job in the Obama administration, and he had a close Obama adviser – Daschle — in his corner, the two Democrats said. United Steeelworkers union officials also backed him.

But while Hindery complained that he “waited for the phone to ring,” a source said, Obama’s aides appear never to have taken his bid seriously. One possible source of friction: Hindery had set himself up in opposition to Obama’s top economic advisors, many of whom were associated with The Hamilton Project, an economic think tank that was the inheritor of former Treasury Secretary Rubin’s generally pro-trade position.

In the same story, of course, we get hedge fund shark Steve Rattner – a huge Democratic fundraiser on Wall Street – bashing Hindery for backing populist Democratic candidates for local and national office.

And that’s the big story here: Leo Hindery, one of the few business leaders to use his wealth to challenge deregulation, corporate trade deals and anti-worker policies was blacklisted by the Obama administration well before the Daschle flap ever happened – and he was blacklisted because he dared to clash with the same Wall Street Democrats whose corporate-backed policies destroyed the economy.

You can go ahead and tell yourself that this is just theory – just a single example. But that’s willful ignorance, as the Hindrey scalping is only one chapter in what has been one long narrative arc whereby economic progressives have been deliberately shut out of top administration jobs. Just step back and think about it for a minute: Amid a stable of eminently qualified and well-respected progressives like James Galbraith, Joseph Stiglitz, Dean Baker, Robert Reich, Paul Krugman and Larry Mishel, Obama has chosen Rubin sycophants like Larry Summers and Tim Geithner to run the economy – the same Larry Summers who pushed the repeal of the Glass-Steagal Act, the same Geithner who masterminded the kleptocratic bank bailout, the same duo whose claim to fame is their personal connections to Rubin, a disgraced Citigroup executive at the center of the current meltdown. And the list of Rubin sycophants keeps getting longer, from Peter Orszag to Jason Furman.

As the Nation’s Chris Hayes shows, its the same in other key regulatory positions, as free market fundamentalists who created the problem take the helm of the regulatory agencies they tried to destroy. Indeed, the only movement progressive in a top economic position is Jared Bernstein, and he was relegated to an amorphous job in the Vice President’s office.

And now we see that’s not an accident. Though Obama won states like Ohio, Pennsylvania and Indiana on promises to challenge Wall Street and reform our trade policies, there has been a deliberate and calculated effort to stack the administration with the very Wall Street Democrats who created the problems he lamented, and shun those who have been fighting the good fight.

[David Sirota is a bestselling author whose newest book is “The Uprising.” He is a fellow at the Campaign for America’s Future and a board member of the Progressive States Network-both nonpartisan organizations. His blog is here..]

This entry was posted in RagBlog and tagged Economic Recovery, Obama Administration, Progressives. Bookmark the permalink.

1 Response to Behind the Daschle Headlines : Blacklisting of Progressive Economists