Success Is Possible with Environmental Protection: The Cuyahoga River 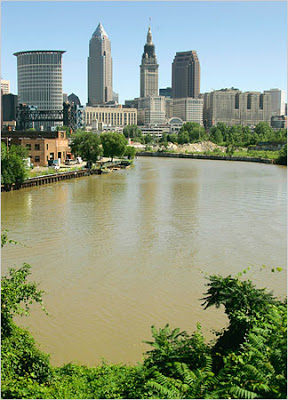 A healthier Cuyahoga River in Cleveland, which was known as “The Mistake by the Lake” after the river caught fire in 1969. Photo: Mark Duncan/Associated Press.
From the Ashes of ’69, a River Reborn
By Christopher Maag / June 20, 2009

CLEVELAND — The first time Gene Roberts fell into the Cuyahoga River, he worried he might die. The year was 1963, and the river was still an open sewer for industrial waste. Walking home, Mr. Roberts smelled so bad that his friends ran to stay upwind of him.

Recently, Mr. Roberts returned to the river carrying his fly-fishing rod. In 20 minutes, he caught six smallmouth bass. “It’s a miracle,” said Mr. Roberts, 58. “The river has come back to life.”

Monday is the 40th anniversary of the Cuyahoga River fire of 1969, when oil-soaked debris floating on the river’s surface was ignited, most likely by sparks from a passing train.

The fire was extinguished in 30 minutes and caused just $50,000 in damage. But it became a galvanizing symbol for the environmental movement, one of a handful of disasters that led to the creation of the Environmental Protection Agency and to the passage of the Clean Water Act.

“The Cuyahoga River fire was a spark plug for environmental reforms around the country,” said Cameron Davis, who was recently appointed to become the special adviser to the E.P.A. on Great Lakes environmental issues.

The fire turned Cleveland into “The Mistake by the Lake,” a national punch line that would endure for decades. Meanwhile, the city worked to reclaim its river.

Today, the Cuyahoga is home to more than 60 species of fish, said Jim White, executive director of the Cuyahoga River Community Planning Organization, a nonprofit group that coordinates cleanup efforts. Beavers, blue herons and bald eagles nest along the river’s banks. Long sections of the Cuyahoga are clean enough that they no longer require aggressive monitoring, regulators said.

“We’re very impressed with the progress made in the Cuyahoga,” said John Perrecone, a manager of Great Lakes programs for the E.P.A.

Other rivers in industrial cities have experienced similar rebirths, said Matthew Doss, policy director for the Great Lakes Commission, which oversees development and environmental efforts in the region for the United States and Canada.

“The Cuyahoga’s progress is notable because of how infamous it was,” Mr. Doss said. “This 40th anniversary gives us an opportunity to celebrate the progress we’ve made nationwide.”

The 1969 fire was tiny compared with those that engulfed the Cuyahoga and other rivers that received large amounts of industrial pollutants from the 1800s through the 1950s. One reason it received national attention, including a prominent article in Time magazine, was that the problem of rivers catching fire was mostly solved by then, said Jonathan Adler, an environmental law professor at Case Western Reserve University.

The outrage caused by the fire was a symptom of a society starting to leave its industrial identity behind, Professor Adler said.

“In the 1930s, when most people in Cleveland worked in factories, a fire on the river was considered just a nuisance,” he said. “By the ’60s, there was a hunger for symbols of humans’ insensitivity to the environment.”

The cleanup of the river advanced on many fronts. A year before the fire, Cleveland residents voted to tax themselves an additional $100 million for river restoration. Since then, local industries and the Northwest Ohio Regional Sewer District have spent $3.5 billion to reduce sewage and industrial waste pollution, Mr. White said.

The sewer district built miles of subway-tunnel-size tubes beneath the city. The tubes hold excess rainwater until it can be processed by treatment plants, reducing the number of times that plants become overwhelmed and spew sewage into the river.

In the next 30 years, Cleveland-area residents will spend about $5 billion more on the wastewater system, said Julius Ciaccia Jr., sewer district director.

“This didn’t happen because a bunch of wild-haired hippies protested down the street,” Mr. Perrecone said. “This happened because a lot of citizens up and down the watershed worked hard for 40 years to improve the river.”

Problems remain, however. The E.P.A. sued the City of Akron in February for dumping excessive amounts of sewage into the Cuyahoga. Along the last 5 of its 100 miles, the river is enclosed by steel walls and dredged regularly for commercial ships, making it difficult for habitats to recover.

“The good news is that we know what the problems are, and we know what the solutions are,” Mr. Davis said. “Now it’s a matter of getting the funding, rolling up our sleeves and doing the work.”

On Monday, people who have worked for years to clean the Cuyahoga will celebrate at its banks. “It’s just remarkable,” said Steve Tuckerman, the Cuyahoga River specialist for the Ohio Environmental Protection Agency. “I never thought I would see in my lifetime, let alone in my career, such an amazing comeback of a river.”

1 Response to Success Is Possible with Environmental Protection: The Cuyahoga River