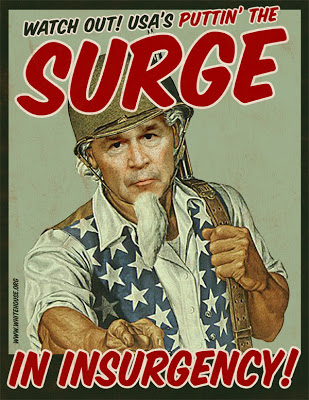 John McCain, aided and abetted by his loving protectors in the media, is running a victory lap on Iraq. To hear them tell it, the surge has “worked” — indeed, it has been a huge success — and this, like a last second Hail Mary pass, has vindicated the entire disastrous Iraq misadventure.

Buoyed by a reduction in violence in Iraq, war supporters are crawling out from the shadows and beating their chests.

“I am proud of the decision of this administration to overthrow Saddam Hussein,” Condi Rice told Judy Woodruff last week. This echoed the comments of her boss, who crowed at a GOP awards dinner at the end of June: “The decision to remove Saddam Hussein was the right decision at the time, and it is the right decision today.” Bush even felt emboldened to dust off blast from the past and claim: “Democracy is taking root where a tyrant once ruled.”

And the media — and even a number of Democrats — are swallowing this triumphalist nonsense whole, and washing it down with a pitcher of revisionist Kool-Aid. The result: a collective case of political amnesia. Everyone seems more than happy to forget what the president’s own stated goal for the surge was: to create “the breathing space [the Iraqi government] needs to make progress in other critical areas.”

But here we are, 18 months later, and McCain and the GOP are being allowed to change the goal. And, surprise, surprise, the retroactive goal they’ve chosen is remarkably similar to the current situation in Iraq: violence is down while the “progress in other critical areas” is sorely lagging.

Using Bush-McCain logic, since the surge has succeeded in reducing violence, there is no need for us to leave. Indeed, we can stay forever.

But here’s the thing: while McCain and the Republicans may have been able to win the PR war among the American media, there is still that nagging problem of the lack of reconciliation among the warring factions in Iraq.

Last month’s GAO report offered chapter and verse on all the ways the Iraqis have failed to reach the benchmarks that were the actual goals of the surge (see HuffPoster Mitchell Bard’s comprehensive breakdown of the report).

And a ceremony held in Baghdad this weekend spoke volumes about the actual state of affairs in Iraq. The event, organized by an expert in conflict resolution, was held to announce the signing of a non-binding agreement reached by representatives from a wide range of Iraq’s sectarian and ethnic factions, and hammered out during a series of secret meetings in Helsinki over the last year.

Although Iraq’s Minister of Reconciliation said the agreement “has the potential to bring Iraqi political parties together in common cause in a way no endeavor has,” coverage of the event leaves a distinctly different impression.

According to the New York Times, there were complaints that representatives of the Maliki government “seemed more intent on declaring the talks a success than in continuing to discuss significant disagreements.” “When we came here,” said a secular Sunni politician quoted in the Times,” Maliki refused to talk about anything, just to have a meeting and a celebration.”

“They can hug each other, and kiss each other, but they still don’t agree,” Joost Hiltermann of the International Crisis Group told the Boston Globe.

“You still have a dominant Shiite power structure that doesn’t want to cede any power,” said Kenneth Katzman, a Middle East specialist at the Congressional Research Service. “Then you have Sunnis who are committed to overturn their humiliations. The fundamental dynamics have not changed.”

The Globe suggested the most important aspect of the agreement was the fact that it was “announced at the Al Rashid Hotel in Baghdad, marking the first time that participants in the effort have felt safe enough to gather inside their own country,” then pointed out that the level of security required to attend the ceremony — “including walls around segregated neighborhoods and eight checkpoints to enter the Green Zone” — serves as “a grim reminder of how far Iraq has to go.”

No surprise then that, according to the Times, experts think real reconciliation in Iraq could take decades.

And this is the good news out of Iraq.

As we continue on the long, hard slog until Election Day, John McCain and his supporters are going to claim again and again that the surge has worked. And it looks like the media are going to let that patently false assertion go unchecked. Which is pretty much how the war got started in the first place. So it is up to Obama, the Democrats, and all of us, to insist on holding the advocates of the surge to its original goal.

And while we are at it, we should also hold them to the original justification for the war itself.

Despite the revisionist re-writes, we didn’t go to war because we were committed to demonstrating that America could unleash violence in Iraq and then, five years later, curb it through the use of reinforcements. We went to war because we were told Iraq posed a grave and imminent threat to our national security and, secondarily, as a means of fomenting democracy throughout the Middle East.

Of course, the “imminent threat” turned out to be non-existent, and our presence in Iraq has strengthened the hand of every bad actor in the region: al Qaeda is safe and adding recruits, Hamas has come to power in Palestine, Hezbollah has reasserted itself in Lebanon, and Iran has become the strongest player in Iraq. Meanwhile, the reduction in casualties in Iraq is starting to be offset by increased casualties in Afghanistan — once again showing the fatal ignorance of stealing from Peter to stop-loss Paul and keep him in Iraq.

So, tell me again: how is the surge working?

This entry was posted in RagBlog and tagged Iraq Occupation, Iraq War, Media, The Surge. Bookmark the permalink.