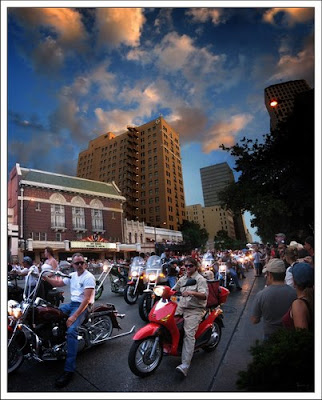 Bikers parade down Congress Ave. in Austin during 2008 Republic of Texas Biker Rally. Photo from Panaramio.
Roll on, Bikers

I held a sign reading ‘Biker Chicks for Peace’… As the bikers passed by, the majority flashed peace signs back at us, smiling and nodding in response.

[The Republic of Texas Biker Rally brings tens of thousands of motorcyclists to Austin yearly. Friday night, June 12, 15,000 motorcycles of all shapes and sizes roared down Congress Avenue as massive crowds cheered them on. Then stunt legend Robbie Knievel jumped over two Budweiser trucks with pyrotechnics, thunderclouds, and the Texas State Capitol as a backdrop. The Rag Blog’s Susan Van Haitsma was there with a contingent from CodePink of Austin.]

Maybe I was a biker chick in a former life. Maybe I am one now. In either case, it was pretty thrilling to be standing at the corner of Cesar Chavez and Congress Avenue last evening as the thousands of bikers turned the corner onto our main drag along their parade route from the Exposition Center. Even inhaling all that exhaust seemed worth being that close to the rumble.

In fact, a group of us dressed in pink biker duds and pink police uniforms were part of the spectacle. We decided to bring a Peace/Stop War message to the biker audience to see how it played. And we were heartened by the overwhelmingly positive reaction from the crowd that rolled by.

I held a sign reading “Biker Chicks for Peace” along with our black, denim and pink-clad entourage, and two of us wore pink police uniforms and held a large “Stop War” sign in the shape of a stop sign. As the bikers passed by, the majority flashed peace signs back at us, smiling and nodding in response. The women, especially.

Now, we did have our eyes peeled for even one pair where the woman drove and the man sat in back. We spotted one three-wheeler with a woman at the throttle and a man in back, but he seemed to be a designated videographer, so we weren’t sure that counted. One of these days, there’s going to be a brave pair who will break the taboo — and then, maybe the dam will break and real men everywhere will want to prove their manliness by handing the controls to a woman — and not back-seat drive, either….

Hey, a biker chick can dream. And we did see quite a few women riding solo.

I was impressed with the care bikers had to take to ride so close to each other in a parade of that size. And, as I walked up and down Congress afterward to take a closer look at the bikes, I marvelled at how they kept their machines so shiny and pristine, many of the bikers having traveled many dusty miles to attend the rally.

There’s certainly an allure to the motorcycle and the open road. Maybe it’s also the artistry of the bikes, and the riskiness of the ride. A bike that got a lot of attention was toting a trailer in the shape of a coffin that had, “A Ride To Die For” written in script on the side. Riders are both extra tough and extra vulnerable, as the tragic accident later that night on US 290 attests.

As I rode home on my trusty bicycle, I did appreciate the quietness of my ride and the lack of fumes. I’m most in love with my green machine. But, I wish the best for the bikers who roll a different way.

[Susan Van Haitsma, a regular contributor to The Rag Blog, is active in Austin with Nonmilitary Options for Youth and CodePink. She also blogs as makingpeace at Statesman.com and at makingpeace.]

This entry was posted in Rag Bloggers and tagged Austin, CodePink, Peace Movement. Bookmark the permalink.