The Blue-Green Alliance, and the Threat from the Populist Right 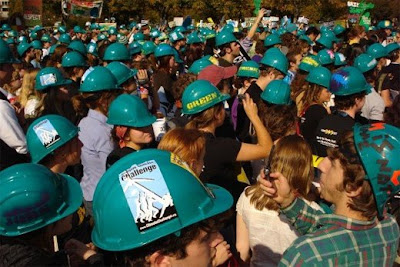 [Prepared as a Memo for the Working Class Studies Association Conference, June 6-8 2009, at the University of Pittsburgh.]

1. One of the more important progressive measures launched in the first 100 days of the Obama administration is the Green Jobs Initiative within the broader Economic Recovery Act. There is substantial money allocated to it, and the appointee brought on to shepherd its development, Van Jones, is one of the few Obama appointees clearly from the left. Green Jobs is also a product of the Blue-Green Alliance, a joint effort by labor unions and environmental groups, which has funded advocacy for the program for years.

2. There are two aspects to Green Jobs, the immediate and the structural. The immediate has to do with bringing living-wage employment with a future to those who need it most, the unemployed and under-employed youth of the inner city. The structural has to do with Green Jobs being part of a larger effort to shift the country’s energy system from one based on burning carbon and uranium to one based on sustainable renewables — solar, wind, wave, hydro and geothermal. All these require major upgrading of the country’s infrastructure and a retooling of its manufacturing for more advanced products and production. Both aspects require a new Green industrial policy, alongside an erosion of the country’s traditional military-industrial policy and more recent neoliberal market fundamentalism.

3. The neoliberal diehards in the House and Senate GOP, together with the right-wing populism stirred up by the Fox-Limbaugh-Hannity media reactionaries, are preparing an all-out attack of Green Jobs on several fronts. First, they attack the whole concept that there is any urgency to anything Green. In their view, global warming and climate change are simply left-wing hoaxes used as a cover to attack the free market and promote government planning, leading to socialism. Second, they attack it as affirmative action for people of color, supposedly masking moral failure and public schools as the real reason for the problems of the inner city. Third, they are preparing a red-baiting campaign against Van Jones in particular, as part of a wider effort to red-bait Obama and deny the legitimacy of his election.

4. Green Jobs will require more than White House and Congressional Democrat support in order to survive this resistance and counter-attack. Getting a program adopted by Congress is only the first step on a long road to its deployment. Community and youth organizations, environmental groups and the trade unions are facing the task of launching a social movement to see to it that Green Jobs is not gutted, delayed or otherwise sabotaged.

5. Green Jobs can be undermined indirectly as well. The program ultimately has to be deployed locally, and pass through state, county and city governments and their hangers-on. Left to their own inclinations, funds for Green Jobs may be diverted to parks or highway projects that shore up existing government worker payrolls with little new employment of those most in need. Alternately, new construction can be turned over to firms importing non-union labor, or using labor at minimum wage rather than living wage standards. Only local coalitions mobilized with some clout at the base can prevent this, and the ball is in the court of the left to organize them.

6. Green Jobs is a natural for the left to build coalitions of diversity in working-class and low-income communities. Start with organizations close to those who need Green Jobs most-inner city youth service agencies, neighborhood churches and their youth groups, sports groups-then approach others needed to make a collaborative work, such as trade union apprenticeship programs, community college trade skills teachers, local home building or remodeling companies looking for new projects. With this assembled, find the local political incumbents, especially at the state level, ready to go to bat for your project. Connect with Green for All, Van Jones’ group, if it’s in a major city near you, for advice.

7. The left has its own approach to bring to the Green Jobs table, apart from being a catalytic organizer. Green Jobs can be implemented in a “low road” way, by giving funds to contractors who hire youth at minimum wage, who in turn winterize a few public buildings, bypass the unions and dump the youth when it’s over. Obviously, this is to be avoided. But there’s a high road, solidarity economy approach that builds a stakeholder collaborative on businesses, unions, credit unions and schools, with a strategic view of a lasting green construction worker cooperative as an outcome, together with higher-tech career paths through community college partnership with high-tech green firms. The solidarity economy, in turn, serves as a way to educate concretely about the prospects for a socialist future.

8. Green Jobs is a product of a long and complex series of working-class and youth struggles. One part reaches back to the global justice battles in the streets of Seattle more than a decade ago. The unions joined this to battle NAFTA, and the youth came out of green and global justice concerns. Both found themselves on the same side of the barricades battling police in the streets — ‘Teamsters and Turtles Forever!’ was a spontaneous slogan. Some in the Steelworkers’ Union and the Sierra Club took it further, and in a paradigm shift, began to see each other as natural allies rather than natural adversaries. The tons of steel and 19,000 machined parts in every wind turbine had to be manufactured and assembled somewhere, after all. This was formally put together and funded as the Blue-Green Alliance. The other component came from the anger of inner city youth facing jails and police harassment and brutality. Demanding jobs for youth was not new and often ignored, but when Van Jones in Oakland put out “Green Jobs, Not Jails” to put kids to work insulating buildings and installing solar panels, he suddenly had people listening in a new way. There is more to the story, but this is the heart of it, and organic development from class struggle, labor-community alliances and youth insurgency. There will be more battles, but with this energy to build on, the prospects are very bright.

[Carl Davidson is webmaster for SolidarityEconomy.net, a national committee member of the Committees of Correspondence for Democracy and Socialism, and a coordinating committee member of the US Solidarity Economy Network. Together with Jerry Harris, he is author of Cyber-Radicalism: A New Left for a Global Age, available at lulu.com. This article was also posted to Keep on Keeping On.]

5 Responses to The Blue-Green Alliance, and the Threat from the Populist Right