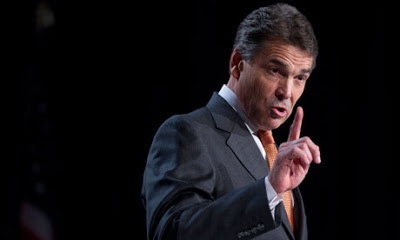 Scientists ask for names to be removed after mentions of climate change and sea-level rise are deleted by Texas officials.

Officials in Rick Perry’s home state of Texas have set off a scientists’ revolt after purging mentions of climate change and sea-level rise from what was supposed to be a landmark environmental report. The scientists said they were disowning the report on the state of Galveston Bay because of political interference and censorship from Perry appointees at the state’s environmental agency.

By academic standards, the protest amounts to the beginnings of a rebellion: every single scientist associated with the 200-page report has demanded their names be struck from the document. “None of us can be party to scientific censorship so we would all have our names removed,” said Jim Lester, a co-author of the report and vice-president of the Houston Advanced Research Center.

“To me it is simply a question of maintaining scientific credibility. This is simply antithetical to what a scientist does,” Lester said. “We can’t be censored.” Scientists see Texas as at high risk because of climate change, from the increased exposure to hurricanes and extreme weather on its long coastline to this summer’s season of wildfires and drought.

However, Perry, in his run for the Republican nomination, has elevated denial of science, from climate change to evolution, to an art form. He opposes any regulation of industry, and has repeatedly challenged the authority of the Environmental Protection Agency.

Texas is the only state to refuse to sign on to the federal government’s new regulations on greenhouse gas emissions. “I like to tell people we live in a state of denial in the state of Texas,” said John Anderson, an oceanographer at Rice University, and author of the chapter targeted by the government censors.

That state of denial percolated down to the leadership of the Texas Commission on Environmental Quality. The agency chief, who was appointed by Perry, is known to doubt the science of climate change. “The current chair of the commission, Bryan Shaw, commonly talks about how human-induced climate change is a hoax,” said Anderson.

But scientists said they still hoped to avoid a clash by simply avoiding direct reference to human causes of climate change and by sticking to materials from peer-reviewed journals. However, that plan began to unravel when officials from the agency made numerous unauthorized changes to Anderson’s chapter, deleting references to climate change, sea-level rise, and wetlands destruction.

Mother Jones has tracked the changes. The agency has defended its actions. “It would be irresponsible to take whatever is sent to us and publish it,” Andrea Morrow, a spokeswoman said in an emailed statement. “Information was included in a report that we disagree with.”

She said Anderson’s report had been “inconsistent with current agency policy,” and that he had refused to change it. She refused to answer any questions. Campaigners said the censorship by the Texas state authorities was a throwback to the George Bush era when White House officials also interfered with scientific reports on climate change.

In the last few years, however, such politicization of science has spread to the states. In the most notorious case, Virginia’s attorney general Ken Cuccinelli, who is a professed doubter of climate science, has spent a year investigating grants made to a prominent climate scientist Michael Mann, when he was at a state university in Virginia.

Several courts have rejected Cuccinelli’s demands for a subpoena for the emails. In Utah, meanwhile, Mike Noel, a Republican member of the Utah state legislature, called on the state university to sack a physicist who had criticized climate science doubters.

The university rejected Noel’s demand, but the physicist, Robert Davies, said such actions had had a chilling effect on the state of climate science. “We do have very accomplished scientists in this state who are quite fearful of retribution from lawmakers, and who consequently refuse to speak up on this very important topic. And the loser is the public,” Davies said in an email.

“By employing these intimidation tactics, these policymakers are, in fact, successful in censoring the message coming from the very institutions whose expertise we need.”

[Suzanne Goldenberg is the U.S. environmental correspondent for the London-based Guardian newspaper, where this article was first published. She has won several awards for her work in the Middle East, and in 2003 covered the U.S. invasion of Iraq from Baghdad. She is author of Madam President, about Hillary Clinton’s historic run for the White House.]